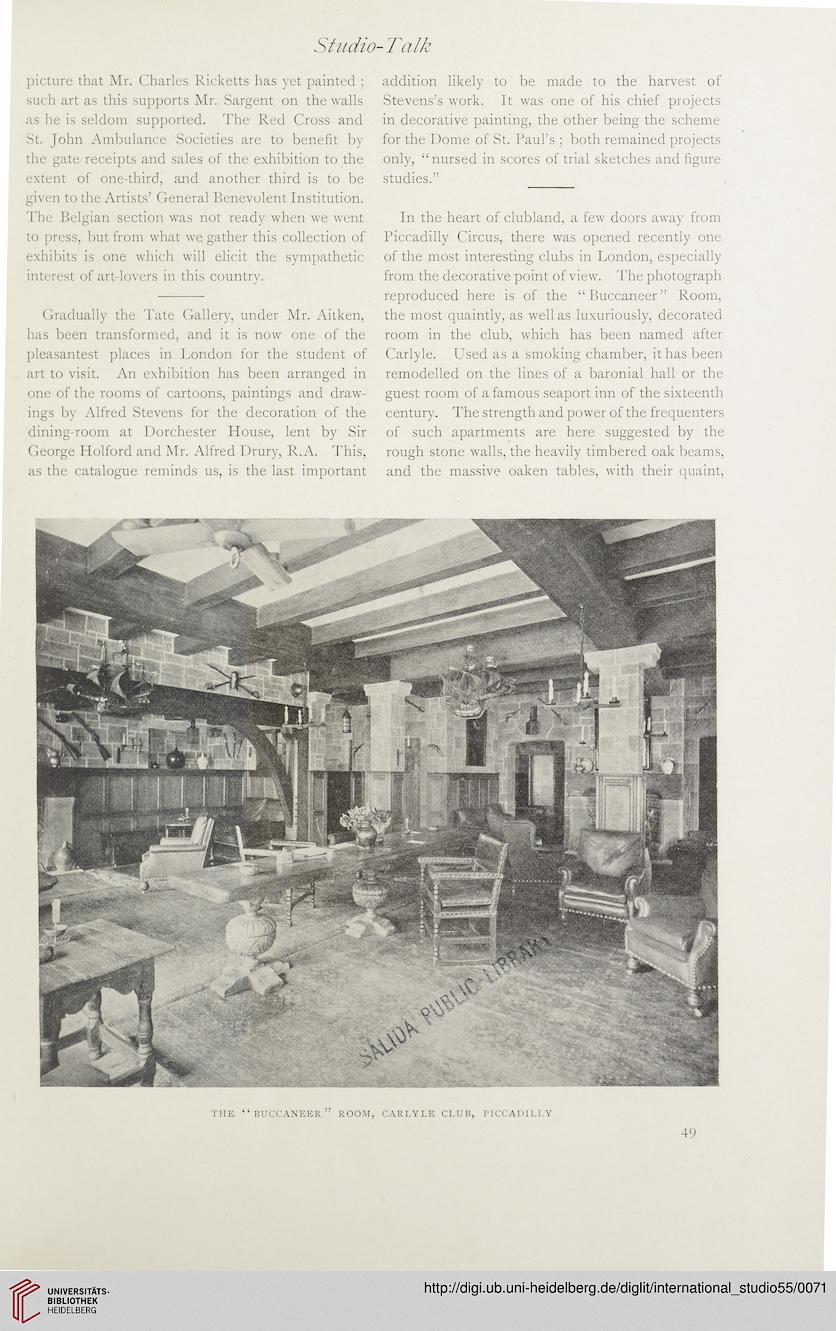 picture that Mr. Charles Ricketts has yet painted ;
such art as this supports Mr. Sargent on the walls
as he is seldom supported. The Red Cross and
St. John Ambulance Societies are to benefit by
the gate receipts and sales of the exhibition to the
extent of one-third, and another third is to be
given to the Artists’ General Benevolent Institution.
The Belgian section was not ready when we went
to press, but from what we. gather this collection of
exhibits is one which will elicit the sympathetic
interest of art-lovers in this country.
Gradually the Tate Gallery, under Mr. Aitken,
has been transformed, and it is now one of the
pleasantest places in London for the student of
art to visit. An exhibition has been arranged in
one of the rooms of cartoons, paintings and draw-
ings by Alfred Stevens for the decoration of the
dining-room at Dorchester House, lent by Sir
George Holford and Mr. Alfred Drury, R.A. This,
as the catalogue reminds us, is the last important

addition likely to be made to the harvest of
Stevens’s work. It was one of his chief projects
in decorative painting, the other being the scheme
for the Dome of St. Paul’s ; both remained projects
only, “nursed in scores of trial sketches and figure
studies.”

In the heart of clubland, a few doors away from
Piccadilly Circus, there was opened recently one
of the most interesting clubs in London, especially
from the decorative point of view. The photograph
reproduced here is of the “Buccaneer” Room,
the most quaintly, as well as luxuriously, decorated
room in the club, which has been named after
Carlyle. Used as a smoking chamber, it has been
remodelled on the lines of a baronial hall or the
guest room of a famous seaport inn of the sixteenth
century. The strength and power of the frequenters
of such apartments are here suggested by the
rough stone walls, the heavily timbered oak beams,
and the massive oaken tables, with their quaint,