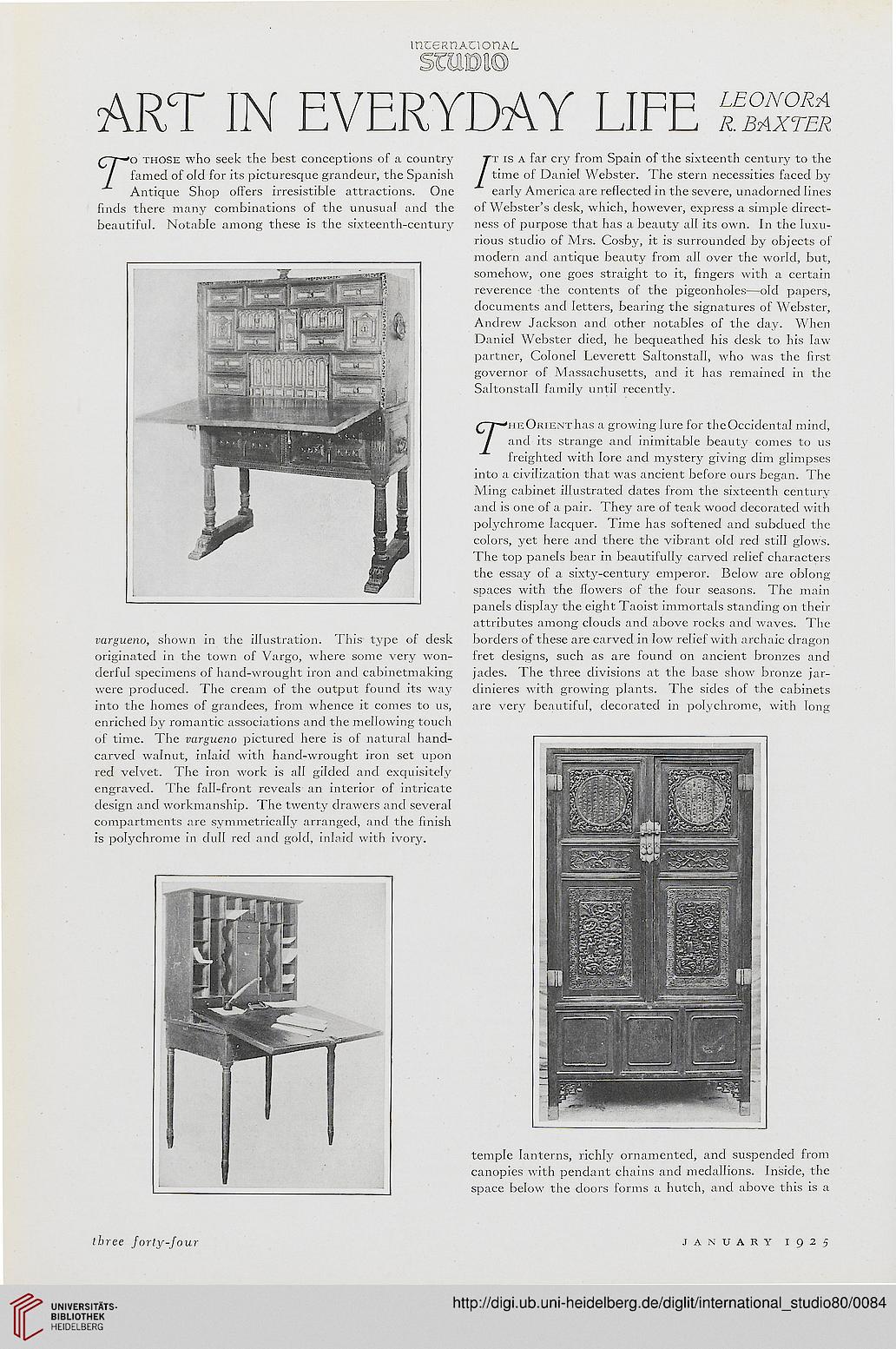 ro those who seek the best conceptions of a country tt is a far cry from Spain of the sixteenth century to the
famed of old for its picturesque grandeur, the Spanish / time of Daniel Webster. The stern necessities faced by
Antique Shop offers irresistible attractions. One early America are reflected in the severe, unadorned lines

finds there many combinations of the unusual and the of Webster's desk, which, however, express a simple direct-
beautiful. Notable among these is the sixteenth-century ness of purpose that has a beauty all its own. In the luxu-
rious studio of Mrs. Cosby, it is surrounded by objects of
modern and antique beauty from all over the world, but,
somehow, one goes straight to it, fingers with a certain
reverence the contents of the pigeonholes—old papers,
documents and letters, bearing the signatures of Webster,
Andrew Jackson and other notables of the day. When
Daniel Webster died, he bequeathed his desk to his law
partner, Colonel Leverett Saltonstall, who was the first
governor of Massachusetts, and it has remained in the
Saltonstall family until recently.

riiriORiENThas a growing lure for theOccidental mind,
and its strange and inimitable beauty comes to us
freighted with lore and mystery giving dim glimpses
into a civilization that was ancient before ours began. The
Ming cabinet illustrated dates from the sixteenth century
and is one of a pair. They are of teak wood decorated with
polychrome lacquer. Time has softened and subdued the
colors, yet here and there the vibrant old red still glows.
The top panels bear in beautifully carved relief characters
the essay of a sixty-century emperor. Below are oblong
spaces with the flowers of the four seasons. The main
panels display the eight Taoist immortals standing on their
attributes among clouds and above rocks and waves. The
vargueno, shown in the illustration. This type of desk borders of these are carved in low relief with archaic dragon
originated in the town of Vargo, where some very won- fret designs, such as are found on ancient bronzes and
derful specimens of hand-wrought iron and cabinetmaking jades. The three divisions at the base show bronze jar-
were produced. The cream of the output found its way dinieres with growing plants. The sides of the cabinets
into the homes of grandees, from whence it comes to us, are very beautiful, decorated in polychrome, with long
enriched by romantic associations and the mellowing touch
of time. The vargueno pictured here is of natural hand-
carved walnut, inlaid with hand-wrought iron set upon
red velvet. The iron work is all gilded and exquisitely
engraved. The fall-front reveals an interior of intricate
design and workmanship. The twenty drawers and several
compartments are symmetrically arranged, and the finish
is polychrome in dull red and gold, inlaid with ivory.

temple lanterns, richly ornamented, and suspended from
canopies with pendant chains and medallions. Inside, the
space below the doors forms a hutch, and above this is a