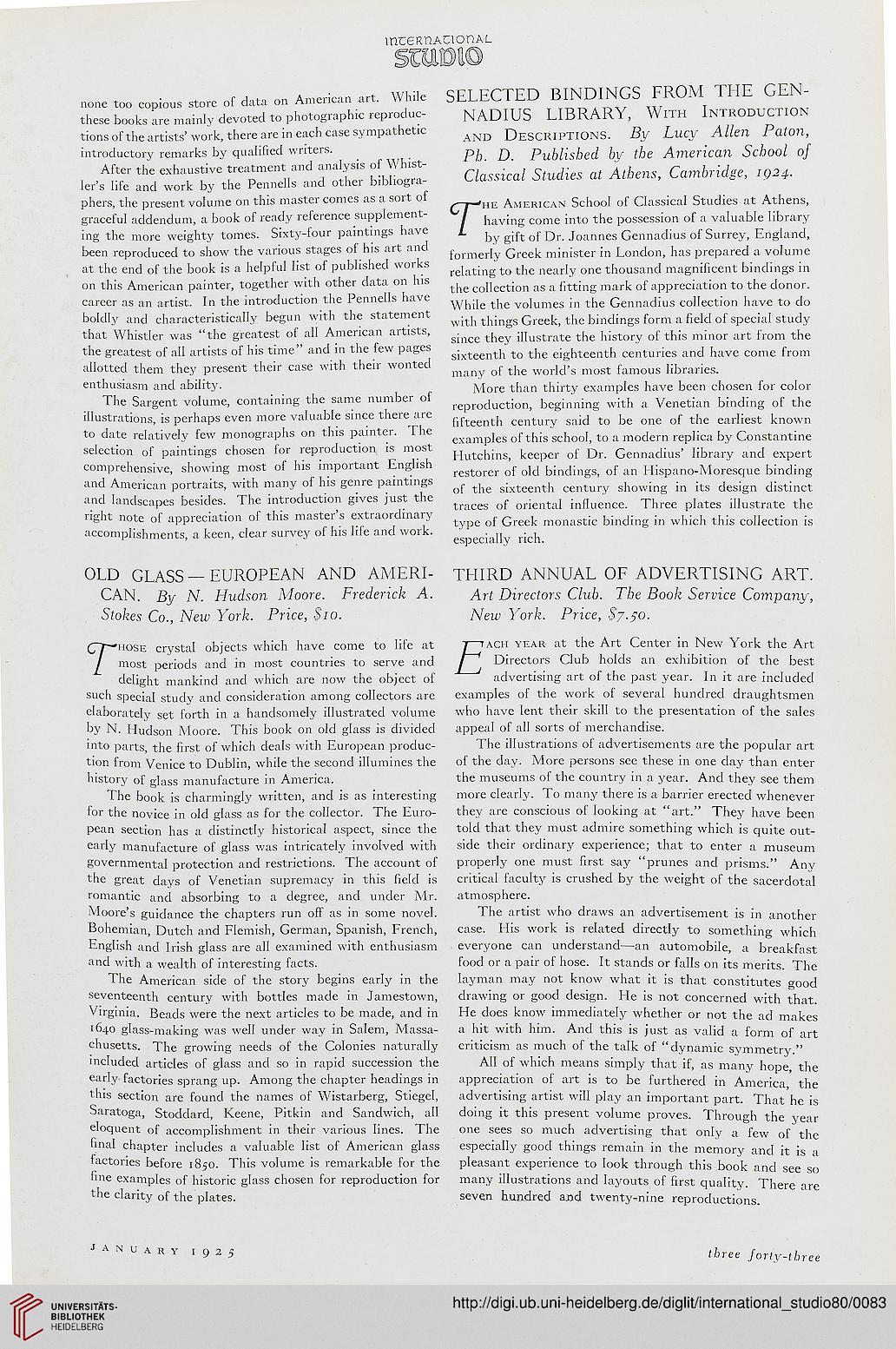 none too copious store of data on American art. While SELECTED BINDINGS FROM THE GEN-

tionsofthe artists'work, there are in each case sympathetic and descriptions. By Lucy Allen Paton,

phers, the present volume on this master comes as a sort of £-j-»HE American School of Classical Studies at Athens,

having come into the possession of a valuable library

been reproduced to show the various stages of his art and formeriy Greek minister in London, has prepared a volume

on this American painter, together with other data on his ^ co]lect;on as a fitt;ng mark of appreciation to the do

career as an artist. In the introduction the Pennells have wh;le ^ volumes in the Gennadius collection have to do

boldly and characteristically begun with the statement wjt^ things Greek, the bindings form a field of special study

that Whistler was "the greatest of all American artists, ^ jtrustrate the hjstory of this minor art from the

allotted them they present their case with their wonted q{ the worId>s most famous libraries,

enthusiasm and ability. More than thirty examples have been chosen for color

The Sargent volume, containing the same number of reproduct;on> beginning with a Venetian binding of the

illustrations, is perhaps even more valuable since there are fifteenth century said to be one of the earliest known

to date relatively few monographs on this painter. The examples of th;s schooI> t0 a modern replica by Constantine

comprehensive, showing most of his important English rf M b;ndingS) of an Hispano-Moresque binding

d American portraits, with many of his genre paintings ^ ^ sixteenth century showing in its design distinct

accomplishments, a keen, clear survey of his fife and work. espec;aiiy r;cri

Those crystal objects which have come to life at
most periods and in most countries to serve and
delight mankind and which are now the object of
such special study and consideration among collectors are
elaborately set forth in a handsomely illustrated volume
by N. Hudson Moore. This book on old glass is divided
into parts, the first of which deals with European produc-
tion from Venice to Dublin, while the second illumines the
history of glass manufacture in America.

The book is charmingly written, and is as interesting
for the novice in old glass as for the collector. The Euro-
pean section has a distinctly historical aspect, since the
early manufacture of glass was intricately involved with
governmental protection and restrictions. The account of
the great days of Venetian supremacy in this field is
romantic and absorbing to a degree, and under Mr.
Moore's guidance the chapters run off as in some novel.
Bohemian, Dutch and Flemish, German, Spanish, French,
English and Irish glass are all examined with enthusiasm
and with a wealth of interesting facts.

The American side of the story begins early in the
seventeenth century with bottles made in Jamestown,
Virginia. Beads were the next articles to be made, and in
1640 glass-making was well under way in Salem, Massa-
chusetts. The growing needs of the Colonies naturally
included articles of glass and so in rapid succession the
early factories sprang up. Among the chapter headings in
this section are found the names of Wistarberg, Stiegel,
Saratoga, Stoddard, Keene, Pitkin and Sandwich, all
eloquent of accomplishment in their various lines. The
final chapter includes a valuable list of American glass
factories before 1850. This volume is remarkable for the
fine examples of historic glass chosen for reproduction for
the clarity of the plates.

ach year at the Art Center in New York the Art
Directors Club holds an exhibition of the best
advertising art of the past year. In it are included
examples of the work of several hundred draughtsmen
who have lent their skill to the presentation of the sales
appeal of all sorts of merchandise.

The illustrations of advertisements are the popular art
of the day. More persons see these in one day than enter
the museums of the country in a year. And they see them
more clearly. To many there is a barrier erected whenever
they are conscious of looking at "art." They have been
told that they must admire something which is quite out-
side their ordinary experience; that to enter a museum
properly one must first say "prunes and prisms." Any
critical faculty is crushed by the weight of the sacerdotal
atmosphere.

The artist who draws an advertisement is in another
case. His work is related directly to something which
everyone can understand—an automobile, a breakfast
food or a pair of hose. It stands or falls on its merits. The
layman may not know what it is that constitutes good
drawing or good design. He is not concerned with that.
He does know immediately whether or not the ad makes
a hit with him. And this is just as valid a form of art
criticism as much of the talk of "dynamic symmetry."

All of which means simply that if, as many hope, the
appreciation of art is to be furthered in America,' the
advertising artist will play an important part. That'he is
doing it this present volume proves. Through the year
one sees so much advertising that only a few of the
especially good things remain in the memory and it is a
pleasant experience to look through this book and see so
many illustrations and layouts of first quality. There are
seven hundred and twenty-nine reproductions.