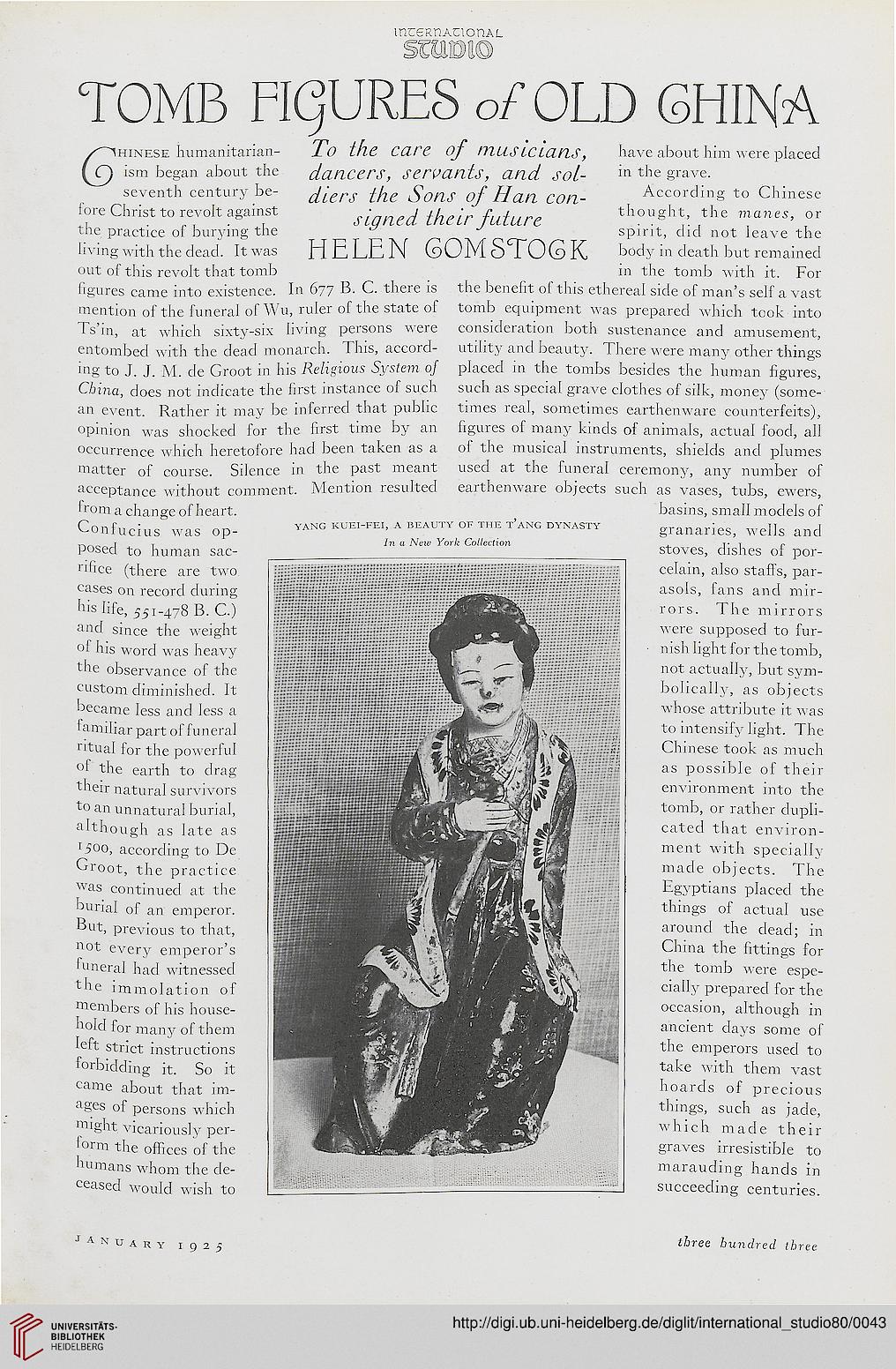 /Chinese humanitarian- To the care of ■ musicians, have about him were placed
( O ism began about the dancers, servants, and sol- in the srave-

W seventh century be- ^ers tne Sons of Han Con- , According to Chinese
lore Christ to revolt against ■ , their future thought, the manes or

the practice of burying the ' , ocr^n \r Spint' dld not IeaVC the
living with the dead. It was HELEN (QOMbiOfoK body in death but remained

out of this revolt that tomb in the tomb with it. For

figures came into existence. In 677 B. C. there is the benefit of this ethereal side of man's self a vast

mention of the funeral of Wu, ruler of the state of tomb ecluiPment was Prepared which took into

Ts'in at which sixty-six living persons were consideration both sustenance and amusement,

entombed with the dead monarch. This, accord- utility and beauty. There were many other things

ing to J J M. de Groot in his Religious System 0/ placed in the tombs besides the human figures,

China, does not indicate the first instance of such such as special grave clothes of silk, money (some-

an event Rather it may be inferred that public times real, sometimes earthenware counterfeits),

opinion was'shocked for the first time by an figures of many kinds of animals, actual food, all

occurrence which heretofore had been taken as a of the musical instruments, shields and plumes

matter of course Silence in the past meant used at the funeral ceremony, any number of

r . 6 YANG KUEI-FEI, A BEAUTY OF THE T ANG DYNASTY granariCS, Wells and

r In a New York Collection StOVeS, dishes of pOl-

rifice (there are two
cases on record during
his life, 551-478 B. C.)
and since the weight
of his word was heavy
the observance of the
custom diminished. It
became less and less a
familiar part of funeral
ritual for the powerful
of the earth to drag
their natural survivors
to an unnatural burial,
alth ough as late as
r500, according to De
Groot, the practice
was continued at the
burial of an emperor.
But, previous to that,
not every emperor's
funeral had witnessed
the immolation of
members of his house-
hold for many of them
left strict instructions
forbidding it. So it
came about that im-
ages of persons which
might vicariously per-
form the offices of the
humans whom the de-
ceased would wish to

asols, fans and mir-
rors. The mirrors
were supposed to fur-
nish light for the tomb,
not actually, but sym-
bolically, as objects
whose attribute it was
to intensify light. The
Chinese took as much
as possible of their
environment into the
tomb, or rather dupli-
cated that environ-
ment with specially
made objects. The
Egyptians placed the
things of actual use
around the dead; in
China the fittings for
the tomb were espe-
cially prepared for the
occasion, although in
ancient days some of
the emperors used to
take with them vast
hoards of precious
things, such as jade,
w h i c h made their
graves irresistible to
marauding hands in
succeeding centuries.