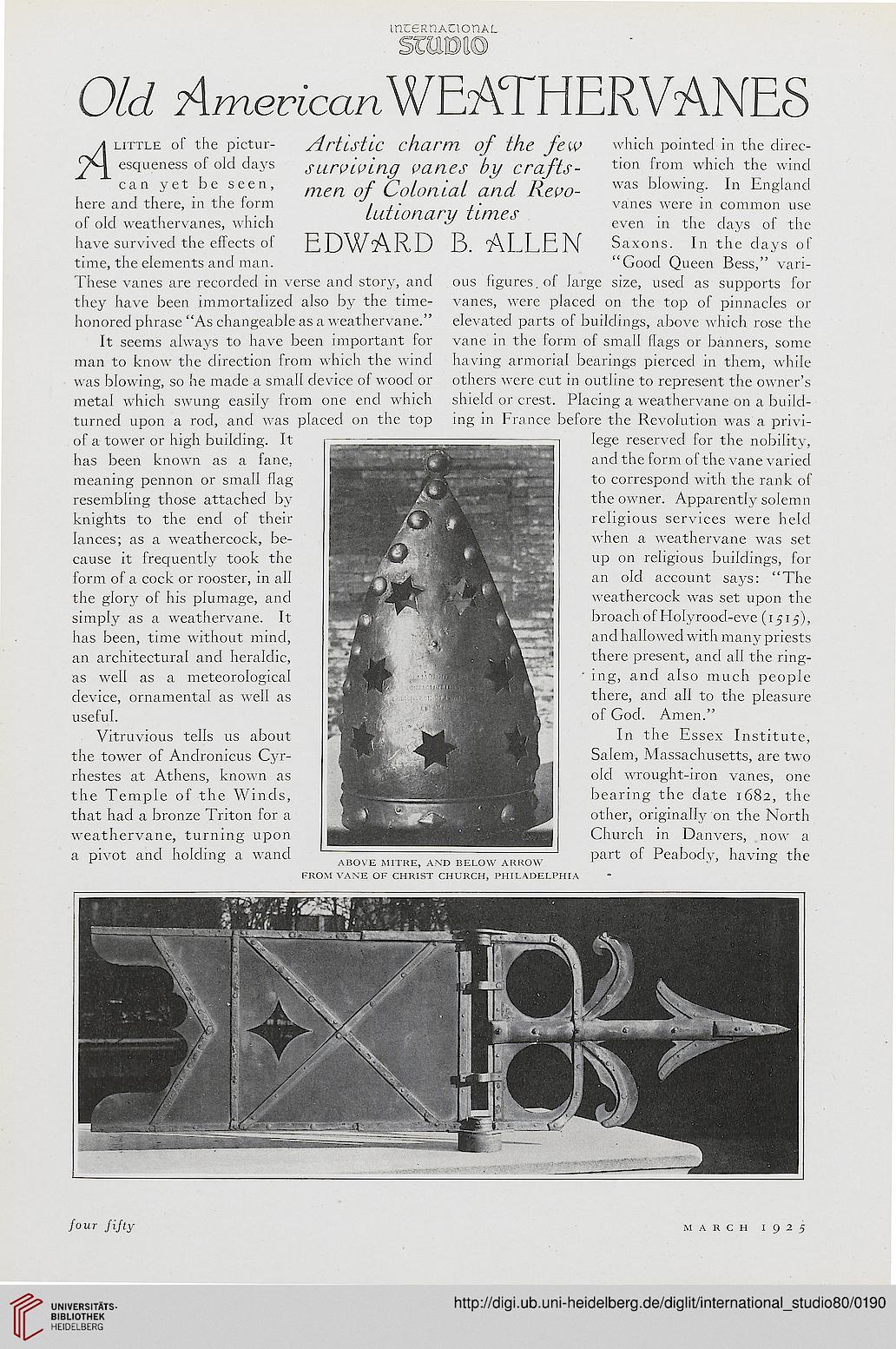 esqueness of old days surviving vanes by crafts- tion from which the wind
can yet be seen, men 0f Colonial and Revo- was bIowinS- In EnSIand

ot old weathervanes, which & even in the days oi the

have survived the effects of EDWARD B. ALLEN Saxons. In the days of
time, the elements and man. "Good Queen Bess," vari-

These vanes are recorded in verse and story, and ous figures, of large size, used as supports for
they have been immortalized also by the time- vanes, were placed on the top of pinnacles or
honored phrase "As changeable as a weathervane." elevated parts of buildings, above which rose the
It seems always to have been important for vane in the form of small flags or banners, some
man to know the direction from which the wind having armorial bearings pierced in them, while
was blowing, so he made a small device of wood or others were cut in outline to represent the owner's
metal which swung easily from one end which shield or crest. Placing a weathervane on a build-
turned upon a rod, and was placed on the top ing in France before the Revolution was a privi-
of a tower or high building. It
has been known as a fane,
meaning pennon or small flag
resembling those attached by
knights to the end of their
lances; as a weathercock, be-
cause it frequently took the
form of a cock or rooster, in all
the glory of his plumage, and
simply as a weathervane. It
has been, time without mind,
an architectural and heraldic,
as well as a meteorological
device, ornamental as well as
useful.

Vitruvious tells us about
the tower of Andronicus Cyr-
rhestes at Athens, known as
the Temple of the Winds,
that had a bronze Triton for a
weathervane, turning upon
a pivot and holding a wand

ABOVE MITRE, AND BELOW ARROW
FROM VANE OF CHRIST CHURCH, PHILADELPHIA

lege reserved for the nobility,
and the form of the vane varied
to correspond with the rank of
the owner. Apparently solemn
religious services were held
when a weathervane was set
up on religious buildings, for
an old account says: "The
weathercock was set upon the
broach of Holyrood-eve (1515),
and hallowed with many priests
there present, and all the ring-
ing, and also much people
there, and all to the pleasure
of God. Amen."

In the Essex Institute,
Salem, Massachusetts, are two
old wrought-iron vanes, one
bearing the date 1682, the
other, originally on the North
Church in Danvers, now a
part of Pea body, having the