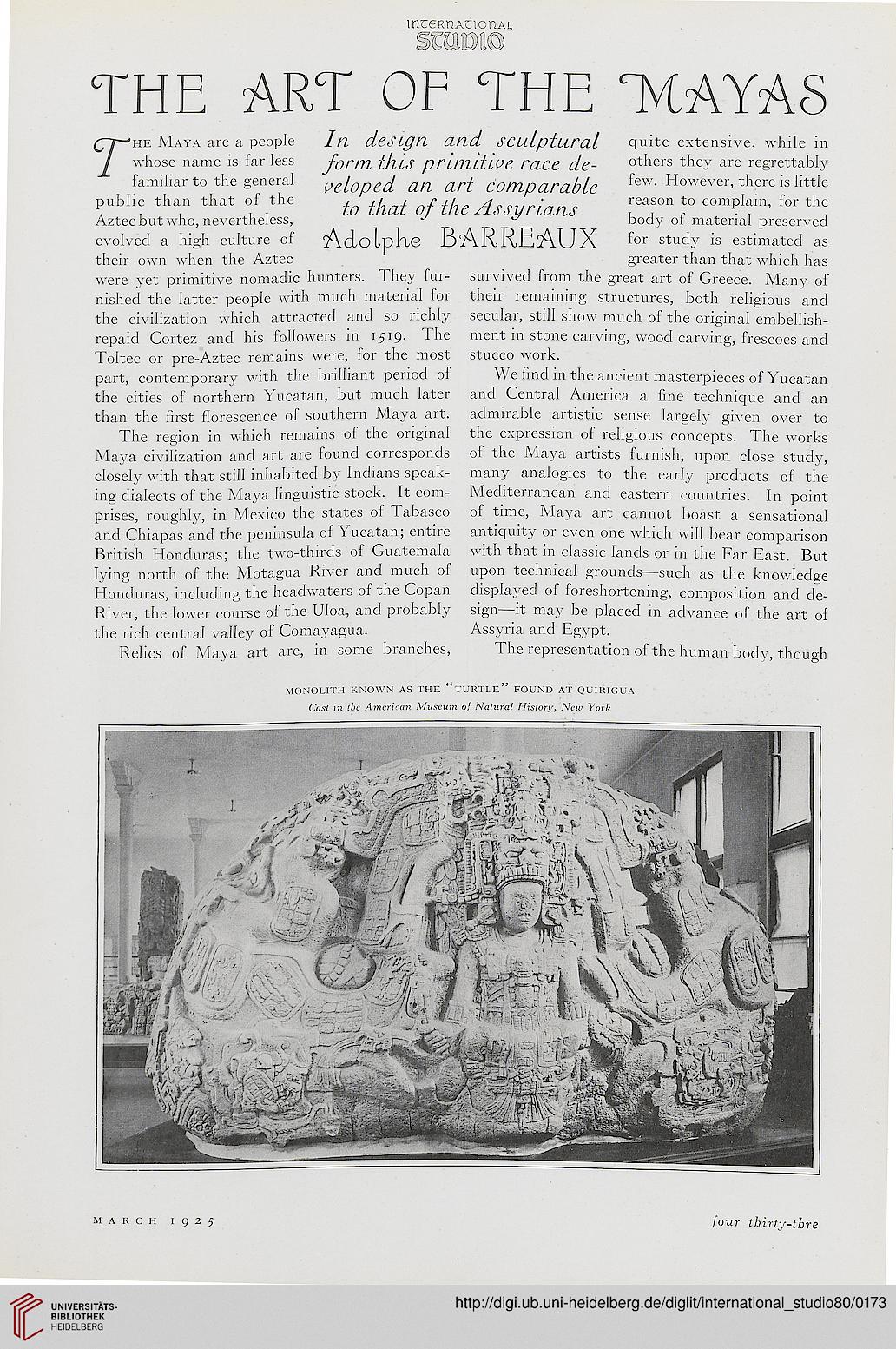 THE ART OP THE "MAYAS

rhe Maya are a people In design and Sculptural quite extensive, while in
whose name is far less form this primitive race de- others they are regrettably

public than that of the fo ^ qj ^ a ians reason to complain, for the

Aztec but who, nevertheless, J ^ body ot material preserved
evolved a high culture of Adolpke BARREAUX for stucIY is estimated as

their own when the Aztec greater than that which has

were yet primitive nomadic hunters. They fur- survived from the great art of Greece. Many of

nished the latter people with much material for their remaining structures, both religious and

the civilization which attracted and so richly secular, still show much of the original embellish-

repaid Cortez and his followers in 1519. The ment in stone carving, wood carving, frescoes and

Toltec or pre-Aztec remains were, for the most stucco work.

part, contemporary with the brilliant period of We find in the ancient masterpieces of Yucatan

the cities of northern Yucatan, but much later and Central America a line technique and an

than the first florescence of southern Maya art. admirable artistic sense largely given over to

The region in w hich remains of the original the expression of religious concepts. The works
Maya civilization and art are found corresponds of the Maya artists furnish, upon close study,
closely with that still inhabited by Indians speak- many analogies to the early products of the
ing dialects of the Maya linguistic stock. It com- Mediterranean and eastern countries. In point
prises, roughly, in Mexico the states of Tabasco of time, Maya art cannot boast a sensational
and Chiapas and the peninsula of Yucatan; entire antiquity or even one which will bear comparison
British Honduras; the two-thirds of Guatemala with that in classic lands or in the Far East. But
lying north of the Motagua River and much of upon technical grounds—such as the knowledge
Honduras, including the headwaters of the Copan displayed of foreshortening, composition and de-
River, the lower course of the Uloa, and probably sign—it may be placed in advance of the art of
the rich central valley of Comayagua. Assyria and Egypt.

Relics of Maya art are, in some branches, The representation of the human body, though

MONOLITH KNOWN AS THE TURTLE FOUND AT QUIRIGUA
Cast in the American Museum of Natural History, New York