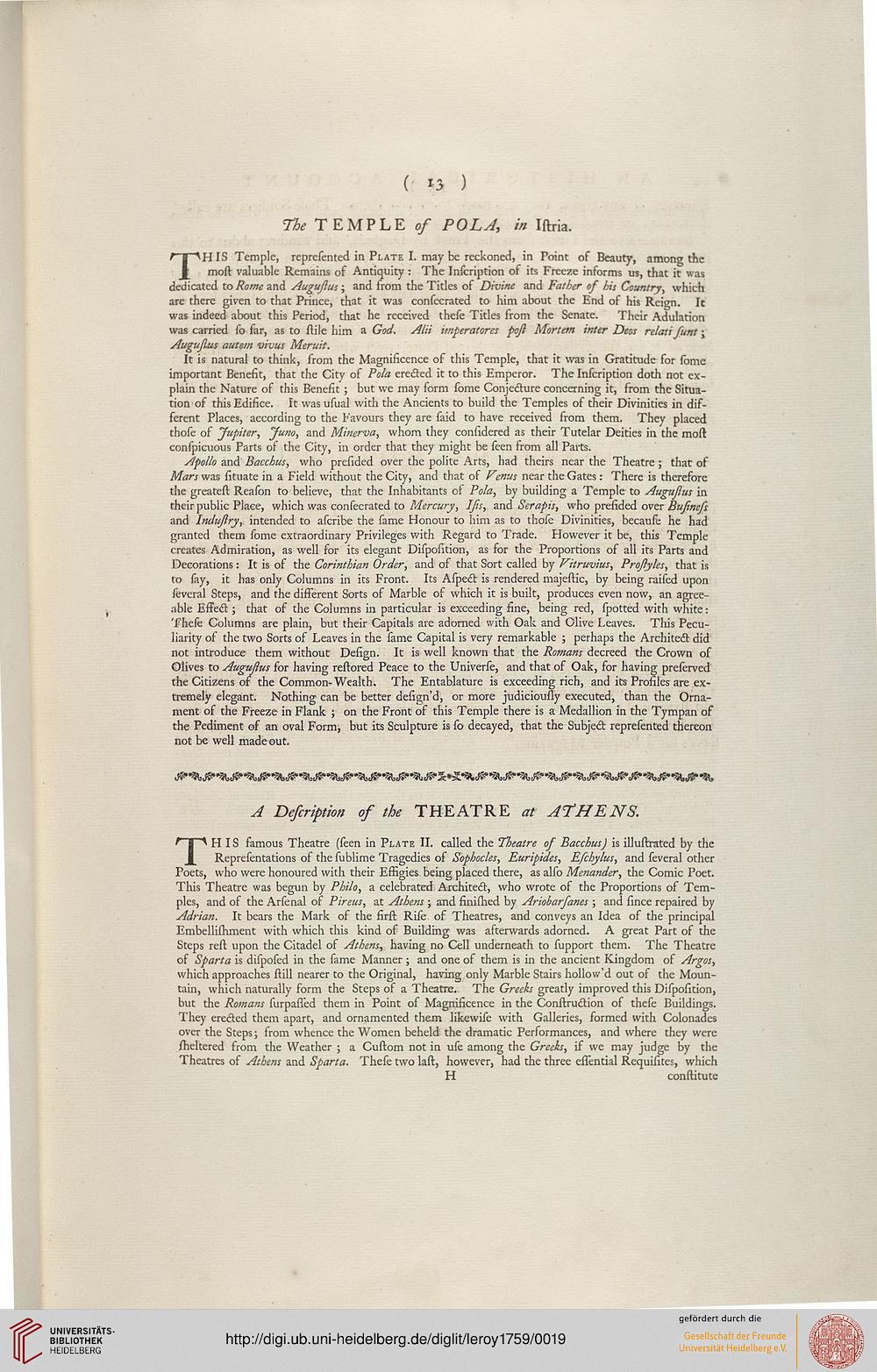 THIS Temple, reprefented in Plate I. may be reckoned, in Point of Beauty, among the
moft valuable Remains of Antiquity: The Infcription of its Freeze informs us, that it was
dedicated to Rome and Augujlas; and from the Titles of Divine and Father of his Country, which
are there given to that Prince, that it was confecrated to him about the End of his Reign. It
was indeed about this Period, that he received thefe Titles from the Senate. Their Adulation
was carried fo far, as to ftile him a God. Alii imperatores pofi Mortem inter Deos relati ftmt •
Augujlus autem vivus Meruit.

It is natural to think, from the Magnificence of this Temple, that it was in Gratitude for fomc
important Benefit, that the City of Pola erected it to this Emperor. The Infcription doth not ex-
plain the Nature of this Benefit ; but we may form fome Conjecture concerning it, from the Situa-
tion of this Edifice. It was ufual with the Ancients to build the Temples of their Divinities in dif-
ferent Places, according to the Favours they are faid to have received from them. They placed
thofe of Jupiter, Juno, and Minerva, whom they confidered as their Tutelar Deities in the moft
confpicuous Parts of the City, in order that they might be feen from all Parts.

Apollo and Bacchus, who prefided over the polite Arts, had theirs near the Theatre; that of
Mars was fituatc in a Field without the City, and that of Venus near the Gates: There is therefore
the greateft Rcafon to believe, that the Inhabitants of Pola, by building a Temple to Augujlus in
their public Place, which was confecrated to Mercury, Jjis, and Serapis, who prefided over Buftnefs
and Indujlry, intended to afcribe the fame Honour to him as to thole Divinities, becaufe he had
granted them fome extraordinary Privileges with Regard to Trade. However it be, this Temple
creates Admiration, as well for its elegant Difpofition, as for the Proportions of all its Parts and
Decorations: It is of the Corinthian Order, and of that Sort called by Vitruvius, Projlyles, that is
to fay, it has only Columns in its Front. Its Afpect is rendered majeftic, by being railed upon
fevcral Steps, and the different Sorts of Marble of which it is built, produces even now, an agree-
able Effect; that of the Columns in particular is exceeding fine, being red, fpotted with white:
Thefe Columns are plain, but their Capitals are adorned with Oak and Olive Leaves. Tlus Pecu-
liarity of the two Sorts of Leaves in the fame Capital is very remarkable ; perhaps the Architect did
not introduce them without Defign. It is well known that the Romans decreed the Crown of
Olives to Augujlus for having reftored Peace to the Univerfe, and that of Oak, for having preferved
the Citizens of the Common- Wealth. The Entablature is exceeding rich, and its Profiles are ex-
tremely elegant. Nothing can be better defign'd, or more judicioufly executed, than the Orna-
ment of the Freeze in Flank ; on the Front of this Temple there is a Medallion in the Tympan of
the Pediment of an oval Form, but its Sculpture is fo decayed, that the Subject reprefented thereon
not be well made out.

A Defcription of the THEATRE at ATHENS.

THIS famous Theatre (feen in Plate II. called the 77?eatre of Bacchus) is illuftrated by the
Reprefentations of thefublime Tragedies of Sophocles, Euripides, Efchylus, and feveral other
Poets, who were honoured with their Effigies being placed there, as alfo Menander, the Comic Poet.
This Theatre was begun by Philo, a celebrated Architect, who wrote of the Proportions of Tem-
ples, and of the Arfenal of Pireus, at Athens ; and finifhed by Ariobarfanes ; and fince repaired by
Adrian. It bears the Mark of the firft Rife of Theatres, and conveys an Idea of the principal
Embellifhment with which this kind of Building was afterwards adorned. A great Part of the
Steps reft upon the Citadel of Athens, having no Cell underneath to fupport them. The Theatre
of Sparta is difpofed in the fame Manner; and one of them is in the ancient Kingdom of Argos,
which approaches ftill nearer to the Original, having only Marble Stairs hollow'd out of the Moun-
tain, which naturally form the Steps of a Theatre. The Greeks greatly improved this Difpofition,
but the Romans furpafled them in Point of Magnificence in the Conftruction of thefe Buildings.
They erected them apart, and ornamented them likewife with Galleries, formed with Colonades
over the Steps; from whence the Women beheld the dramatic Performances, and where they were
iheltered from the Weather ; a Cuftom not in ufe among the Greeks, if we may judge by the
Theatres of Athens and Sparta. Thefe two laft, however, had the three efiential Requifites, which