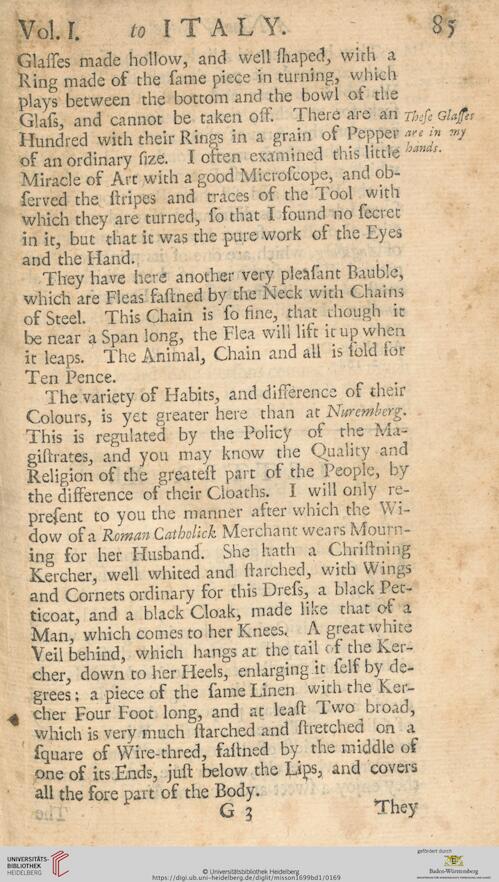 Information about OCR text
Vol. I. to ITALY. 8;
Glasses made hollow, and well lhaped, with a
Ring made of the same piece in turning, which
plays between the bottom and the bowl of the
Glals, and cannot be taken oss. There are an zhefe Glaffes
Hundred with their Rings in a grain of Pepper are in w/
of an ordinary size. I often examined this little hantls-
Miracle of Art with a good Microscope, and ob-
served the. stripes and traces of the Tool with
which they are turned, so that I found no secret
in it, but that it was the pure work of the Eyes
and the Hand.
They have here another very pieplant Bauble,
which are Fleas fastned by the Neck with Chains
of Steel. This Chain is so fine, that though it
be near a Span long, the Flea will lift it up when
it leaps. The Animal, Chain and all is sold lor
Ten Pence.
The variety of Habits, and difference of their
Colours, is yet greater here than at Nuremberg.
This is regulated by the Policy of rhe Ma-
gistrates, and you may know the Quality and
Religion of the greatest part of the People, by
the disserence of their Cloaths. I will only re-
present to you the manner after which the Wi-
dow os a Roman Catholick Merchant wears Mourn-
ing for her Husband. She hath a Christning
Kercher, well whited and starched, with Wings
and Cornets ordinary for this Dress, a black Pet-
ticoat, and a black Cloak, made like that of a
Man, which comes to her Knees. A great white
Veil behind, which hangs at the tail of the Ker-
cher, down to her Heels, enlarging it self by de-
grees ; a piece of the same Linen with the Ker-
cher Four Foot long, and at least Two broad,
which is very much starched and stretched on a
square os Wire-thred, fastned by the middle os
one of its Ends, just below the Lips, and covers
all the fore part of the Body.
G ; They