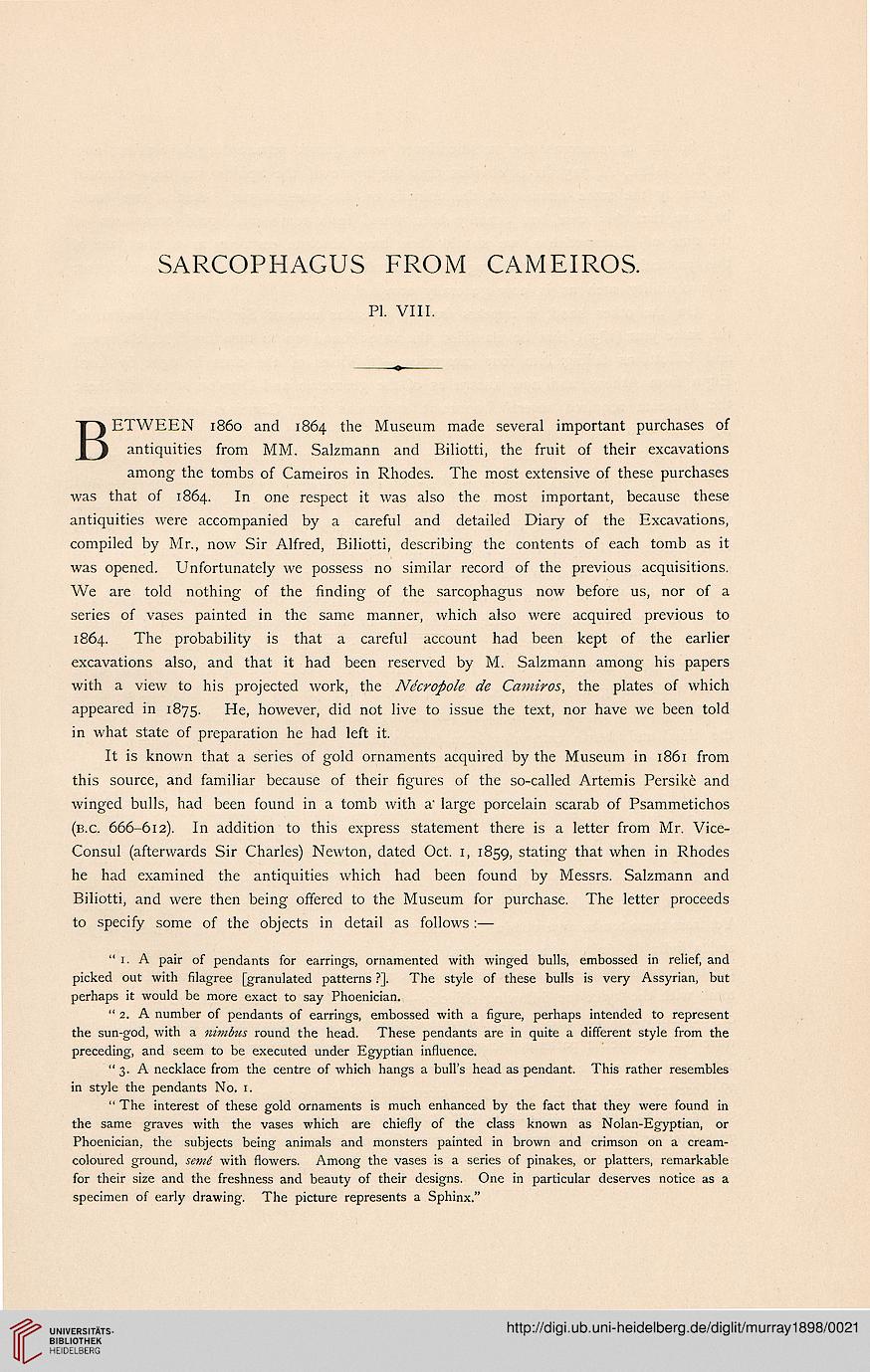 BETWEEN i860 and 1864 the Museum made several important purchases of
antiquities from MM. Salzmann and Biliotti, the fruit of their excavations
among the tombs of Cameiros in Rhodes. The most extensive of these purchases
was that of 1864. In one respect it was also the most important, because these
antiquities were accompanied by a careful and detailed Diary of the Excavations,
compiled by Mr., now Sir Alfred, Biliotti, describing the contents of each tomb as it
was opened. Unfortunately we possess no similar record of the previous acquisitions.
We are told nothing of the finding of the sarcophagus now before us, nor of a
series of vases painted in the same manner, which also were acquired previous to
1864. The probability is that a careful account had been kept of the earlier
excavations also, and that it had been reserved by M. Salzmann among his papers
with a view to his projected work, the Ndcropole de Camiros, the plates of which
appeared in 1875. He, however, did not live to issue the text, nor have we been told
in what state of preparation he had left it.

It is known that a series of gold ornaments acquired by the Museum in 1861 from
this source, and familiar because of their figures of the so-called Artemis Persike and
winged bulls, had been found in a tomb with a' large porcelain scarab of Psammetichos
(b.c. 666-612). In addition to this express statement there is a letter from Mr. Vice-
Consul (afterwards Sir Charles) Newton, dated Oct. 1, 1859, stating that when in Rhodes
he had examined the antiquities which had been found by Messrs. Salzmann and
Biliotti, and were then being offered to the Museum for purchase. The letter proceeds
to specify some of the objects in detail as follows:—

" 1. A pair of pendants for earrings, ornamented with winged bulls, embossed in relief, and
picked out with filagree [granulated patterns ?]. The style of these bulls is very Assyrian, but
perhaps it would be more exact to say Phoenician.

"2. A number of pendants of earrings, embossed with a figure, perhaps intended to represent
the sun-god, with a nimbus round the head. These pendants are in quite a different style from the
preceding, and seem to be executed under Egyptian influence.

" 3. A necklace from the centre of which hangs a bull's head as pendant. This rather resembles
in style the pendants No. 1.

" The interest of these gold ornaments is much enhanced by the fact that they were found in
the same graves with the vases which are chiefly of the class known as Nolan-Egyptian, or
Phoenician, the subjects being animals and monsters painted in brown and crimson on a cream-
coloured ground, sem6 with flowers. Among the vases is a series of pinakes, or platters, remarkable
for their size and the freshness and beauty of their designs. One in particular deserves notice as a
specimen of early drawing. The picture represents a Sphinx."