Hinweis: Your session has expired. A new one has started.
Metadaten 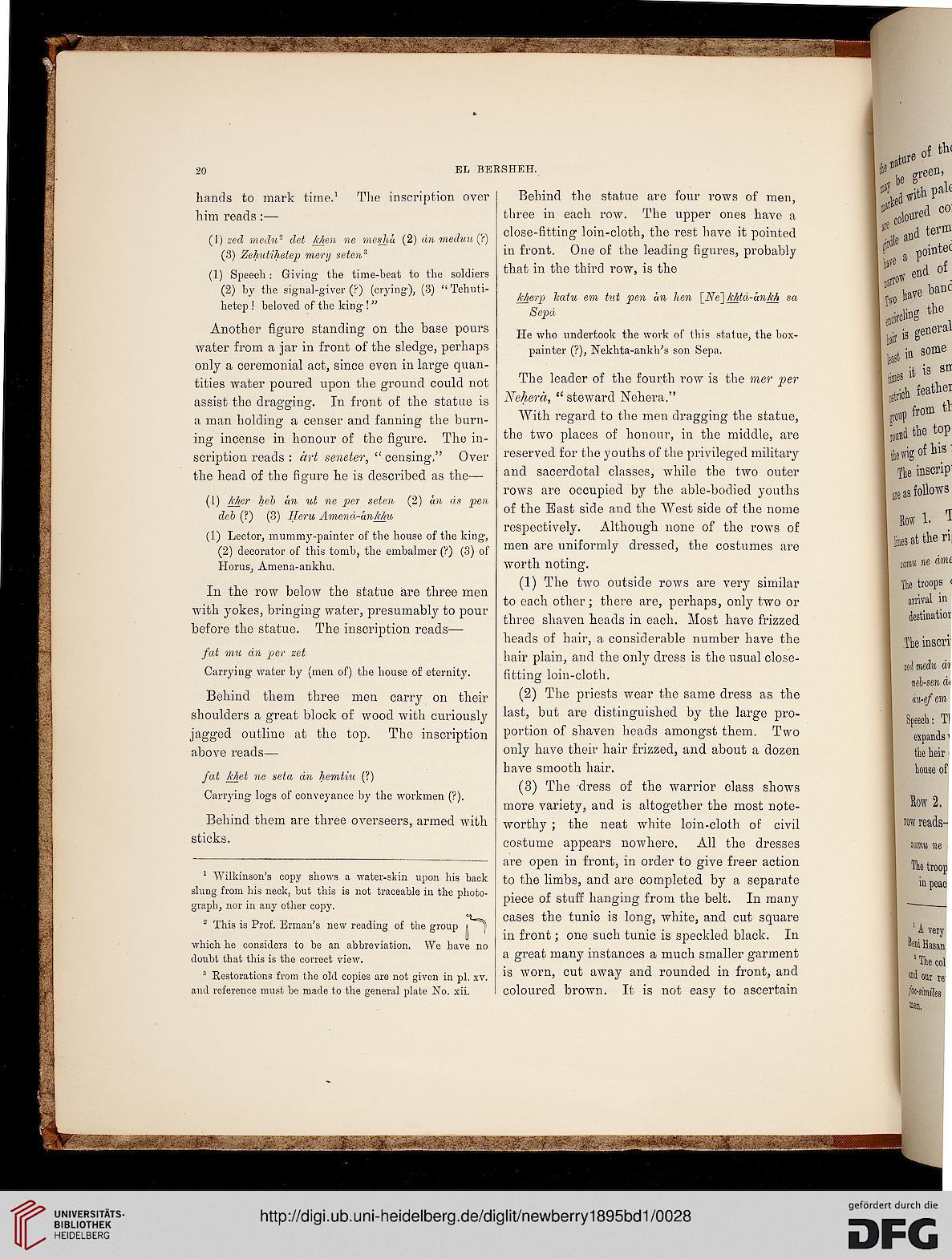 hands to mark time.1 The inscription over
him reads :—

Another figure standing on the base pours
water from a jar in front of the sledge, perhaps
only a ceremonial act, since even in large quan-
tities water poured upon the ground could not
assist the dragging. In front of the statue is
a man holding a censer and fanning the burn-
ing incense in honour of the figure. The in-
scription reads : art seneter, " censing." Over
the head of the figure he is described as the—

In the row below the statue are three men
with yokes, bringing water, presumably to pour
before the statue. The inscription reads—

fat mu an per zet
Carrying water by (men of) the house of eternity.

Behind them three men carry on their
shoulders a great block of wood with curiously
jagged outline at the top. The inscription
above reads—

Carrying logs of conveyance by the workmen (?).

Behind them are three overseers, armed with
sticks.

1 AYilkinson's copy shows a water-skin upon his back
slung from his neck, but this is not traceable in the photo-
graph, nor in any other copy.

which he considers to be an abbreviation. We have no
doubt that this is the correct view.

3 Restorations from the old copies are not given in pi. xv.
and reference must be made to the general plate No. xii.

Behind the statue are four rows of men,
three in each row. The upper ones have a
close-fitting loin-cloth, the rest have it pointed
in front. One of the leading figures, probably
that in the third row, is the

He who undertook the work of this statue, the box-
painter (?), Nekhta-ankh's son Sepa.

The leader of the fourth row is the mer per
Nehera, "steward Nehera."

With regard to the men dragging the statue,
the two places of honour, in the middle, are
reserved for the youths of the privileged military
and sacerdotal classes, while the two outer
rows are occupied by the able-bodied youths
of the East side and the "West side of the nome
respectively. Although none of the rows of
men are uniformly dressed, the costumes are
worth noting.

(1) The two outside rows are very similar
to each other; there are, perhaps, only two or
three shaven heads in each. Most have frizzed
heads of hair, a considerable number have the
hair plain, and the only dress is the usual close-
fitting loin-cloth.

(2) The priests wear the same dress as the
last, but are distinguished by the large pro-
portion of shaven heads amongst them. Two
only have their hair frizzed, and about a dozen
have smooth hair.

(3) The dress of the warrior class shows
more variety, and is altogether the most note-
worthy ; the neat white loin-cloth of civil
costume appears nowhere. All the dresses
are open in front, in order to give freer action
to the limbs, and are completed by a separate
piece of stuff hanging from the belt. In many
cases the tunic is long, white, and cut square
in front; one such tunic is speckled black. In
a great many instances a much smaller garment
is worn, cut away and rounded in front, and
coloured brown. It is not easy to ascertain

is ge»eral
t in some
it is sn

]ines at the ri

The troops <
arrival in
destinatior

the heir
house of

The troop
in peac