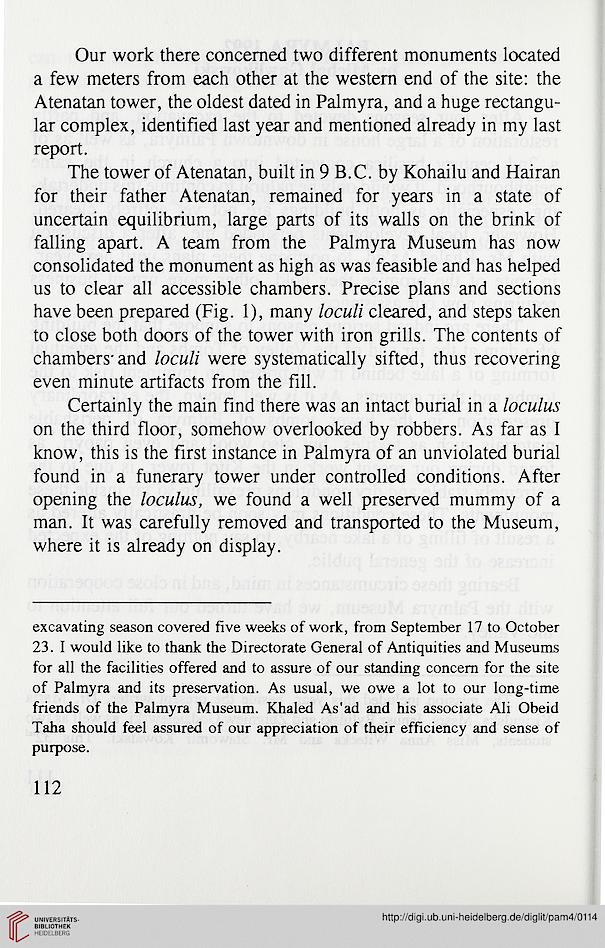 Information about OCR text
Our work there concerned two different monuments located
a few meters from each other at the western end of the site: the
Atenatan tower, the oldest dated in Palmyra, and a huge rectangu-
lar complex, identified last year and mentioned already in my last
report.
The tower of Atenatan, built in 9 B.C. by Kohailu and Hairan
for their father Atenatan, remained for years in a state of
uncertain equilibrium, large parts of its walls on the brink of
falling apart. A team from the Palmyra Museum has now
consolidated the monument as high as was feasible and has helped
us to clear all accessible chambers. Precise plans and sections
have been prepared (Fig. 1), many /ocM/;' cleared, and steps taken
to close both doors of the tower with iron grills. The contents of
chambers* and /ocM/i' were systematically sifted, thus recovering
even minute artifacts from the fill.
Certainly the main find there was an intact burial in a /ocM&y
on the third floor, somehow overlooked by robbers. As far as I
know, this is the first instance in Palmyra of an unviolated burial
found in a funerary tower under controlled conditions. After
opening the /ocM&y, we found a well preserved mummy of a
man. It was carefully removed and transported to the Museum,
where it is already on display.

excavating season covered five weeks of work, from September 17 to October
23. I would like to thank the Directorate General of Antiquities and Museums
for all the facilities offered and to assure of our standing concern for the site
of Palmyra and its preservation. As usual, we owe a lot to our long-time
friends of the Palmyra Museum. Khaled As'ad and his associate Ali Obeid
Taha should feel assured of our appreciation of their efficiency and sense of
purpose.