Payne, Humfry
Necrocorinthia: a study of Corinthian art in the Archaic period — Oxford, 1931 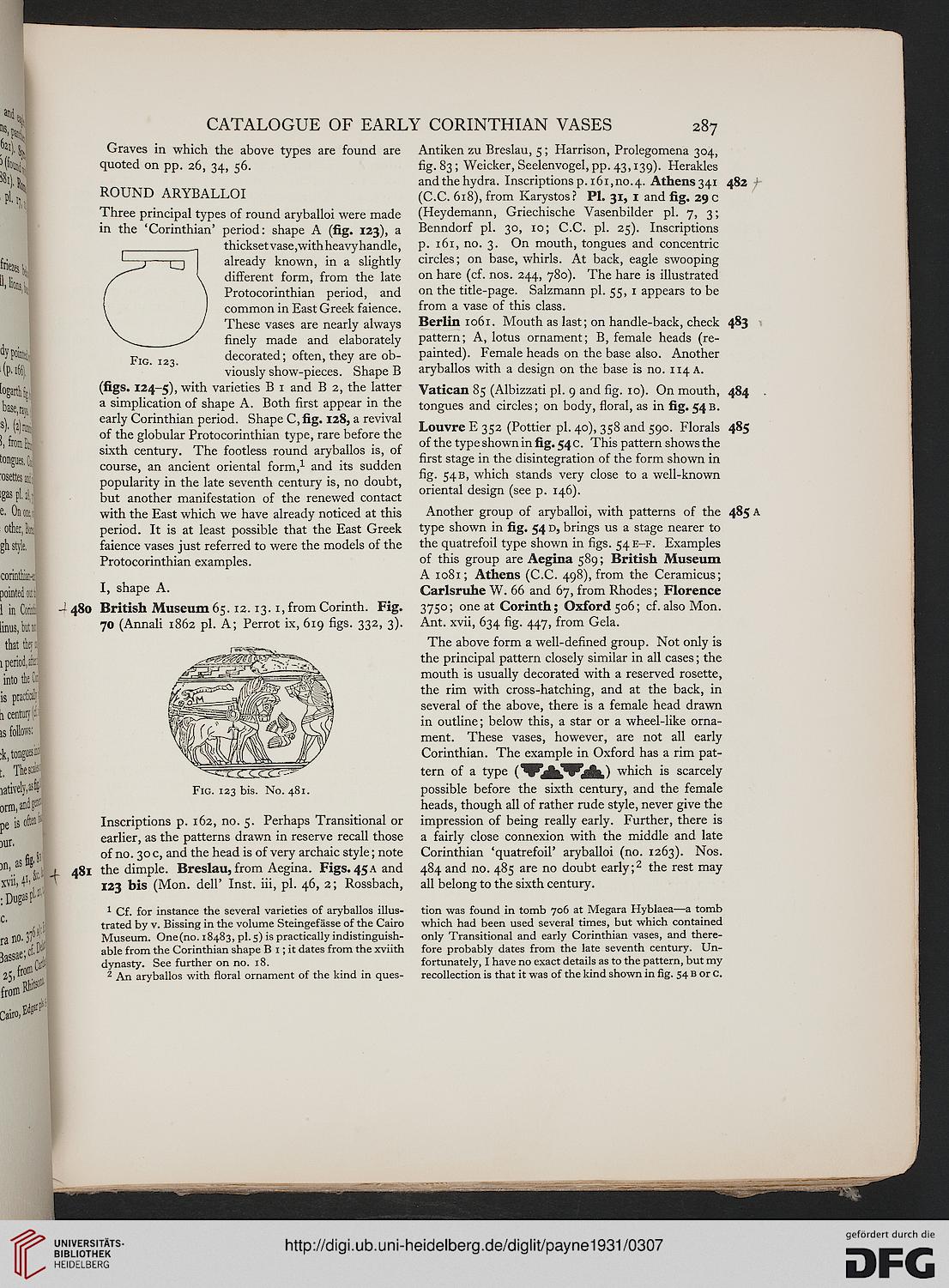 Three principal types of round aryballoi were made
in the 'Corinthian' period: shape A (fig. 123), a
thickset vase,with heavy handle,
already known, in a slightly
different form, from the late
Protocorinthian period, and
common in East Greek faience.
These vases are nearly always
finely made and elaborately
decorated; often, they are ob-
viously show-pieces. Shape B
(figs. 124-5), wrtn varieties B 1 and B 2, the latter
a simplication of shape A. Both first appear in the
early Corinthian period. Shape C, fig. 128, a revival
of the globular Protocorinthian type, rare before the
sixth century. The footless round aryballos is, of
course, an ancient oriental form,1 and its sudden
popularity in the late seventh century is, no doubt,
but another manifestation of the renewed contact
with the East which we have already noticed at this
period. It is at least possible that the East Greek
faience vases just referred to were the models of the
Protocorinthian examples.

1 Cf. for instance the several varieties of aryballos illus-
trated by v. Bissing in the volume Steingefasse of the Cairo
Museum. One (no. 18483, pi. 5) is practically indistinguish-
able from the Corinthian shape B 1; it dates from the xviith
dynasty. See further on no. 18.

2 An aryballos with floral ornament of the kind in ques-

Berlin 1061. Mouth as last; on handle-back, check 483
pattern; A, lotus ornament; B, female heads (re-
painted). Female heads on the base also. Another
aryballos with a design on the base is no. 114 a.

The above form a well-defined group. Not only is
the principal pattern closely similar in all cases; the
mouth is usually decorated with a reserved rosette,
the rim with cross-hatching, and at the back, in
several of the above, there is a female head drawn
in outline; below this, a star or a wheel-like orna-
ment. These vases, however, are not all early
Corinthian. The example in Oxford has a rim pat-
tern of a type (▼jJfcVJfiifc) which is scarcely
possible before the sixth century, and the female
heads, though all of rather rude style, never give the
impression of being really early. Further, there is
a fairly close connexion with the middle and late
Corinthian 'quatrefoil' aryballoi (no. 1263). Nos.
484 and no. 485 are no doubt early;2 the rest may
all belong to the sixth century.

tion was found in tomb 706 at Megara Hyblaea—a tomb
which had been used several times, but which contained
only Transitional and early Corinthian vases, and there-
fore probably dates from the late seventh century. Un-
fortunately, I have no exact details as to the pattern, but my
recollection is that it was of the kind shown in fig. 54 b or c.