Perring, John Shae; Andrews, E. J. [Editor]
The pyramids of Gizeh: from actual survey and admeasurement (Band 3): The pyramids to the southward of Gizeh and at Abou Roash... — London, 1842 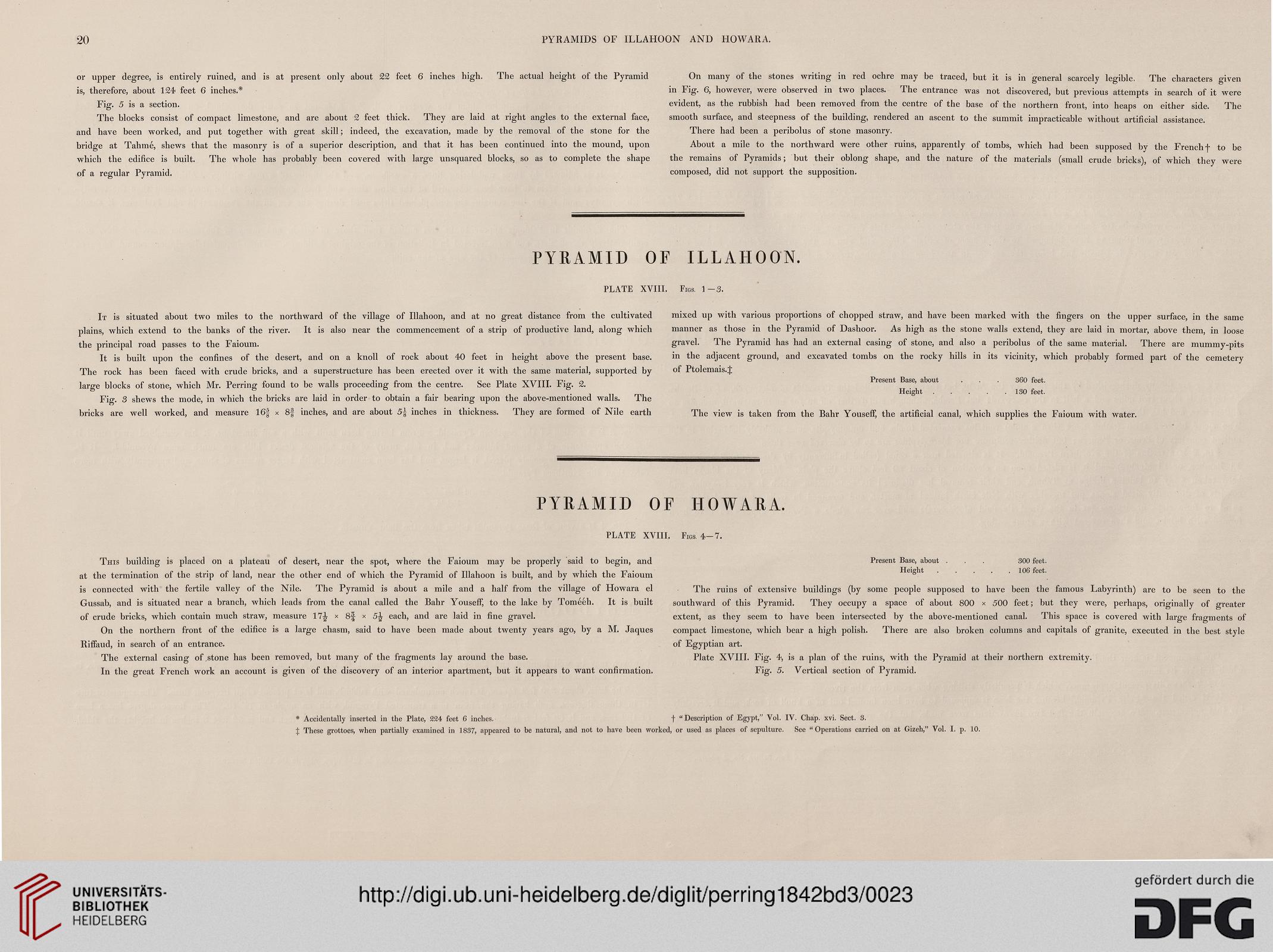 or upper degree, is entirely ruined, and is at present only about 22 feet 6 inches high. The actual height of the Pyramid
is, therefore, about 124 feet 6 inches.*

The blocks consist of compact limestone, and are about 2 feet thick. They are laid at right angles to the external face,
and have been worked, and put together with great skill; indeed, the excavation, made by the removal of the stone for the
bridge at Tahme, shews that the masonry is of a superior description, and that it has been continued into the mound, upon
which the edifice is built. The whole has probably been covered with large unsquared blocks, so as to complete the shape
of a regular Pyramid.

On many of the stones writing in red ochre may be traced, but it is in general scarcely legible. The characters given
in Fig. 6, however, were observed in two places. The entrance was not discovered, but previous attempts in search of it were
evident, as the rubbish had been removed from the centre of the base of the northern front, into heaps on either side. The
smooth surface, and steepness of the building, rendered an ascent to the summit impracticable without artificial assistance.

There had been a peribolus of stone masonry.

About a mile to the northward were other ruins, apparently of tombs, which had been supposed by the French f to be
the remains of Pyramids; but their oblong shape, and the nature of the materials (small crude bricks), of which they were
composed, did not support the supposition.

It is situated about two miles to the northward of the village of Illahoon, and at no great distance from the cultivated
plains, which extend to the banks of the river. It is also near the commencement of a strip of productive land, along which
the principal road passes to the Faioum.

It is built upon the confines of the desert, and on a knoll of rock about 40 feet in height above the present base.
The rock has been faced with crude bricks, and a superstructure has been erected over it with the same material, supported by
large blocks of stone, which Mr. Perring found to be walls proceeding from the centre. See Plate XVIII. Fig. 2.

Fig. 3 shews the mode, in which the bricks are laid in order to obtain a fair bearing upon the above-mentioned walls. The

bricks are well worked, and measure 16

inches, and are about 5-J inches in thickness. They are formed of Nile earth

mixed up with various proportions of chopped straw, and have been marked with the fingers on the upper surface, in the same

manner as those in the Pyramid of Dashoor. As high as the stone walls extend, they are laid in mortar, above them, in loose

gravel. The Pyramid has had an external casing of stone, and also a peribolus of the same material. There are mummy-pits

in the adjacent ground, and excavated tombs on the rocky hills in its vicinity, which probably formed part of the cemetery

The view is taken from the Bahr Youseff, the artificial canal, which supplies the Faioum with water.

This building is placed on a plateau of desert, near the spot, where the Faioum may be properly said to begin, and
at the termination of the strip of land, near the other end of which the Pyramid of Illahoon is built, and by which the Faioum
is connected with the fertile valley of the Nile. The Pyramid is about a mile and a half from the village of Howara el
Gussab, and is situated near a branch, which leads from the canal called the Bahr Youseff, to the lake by Tomeeh. It is built
of crude bricks, which contain much straw, measure 17J x 8f x 5J each, and are laid in fine gravel.

On the northern front of the edifice is a large chasm, said to have been made about twenty years ago, by a M. Jaques
Riffaud, in search of an entrance.

The external casing of,stone has been removed, but many of the fragments lay around the base.

In the great French work an account is given of the discovery of an interior apartment, but it appears to want confirmation.

Present Base, about
Height

The ruins of extensive buildings (by some people supposed to have been the famous Labyrinth) are to be seen to the
southward of this Pyramid. They occupy a space of about 800 x 500 feet; but they were, perhaps, originally of greater
extent, as they seem to have been intersected by the above-mentioned canal. This space is covered with large fragments of
compact limestone, which bear a high polish. There are also broken columns and capitals of granite, executed in the best style
of Egyptian art.

Plate XVIII. Fig. 4, is a plan of the ruins, with the Pyramid at their northern extremity.
Fig. 5. Vertical section of Pyramid.

% These grottoes, when partially examined in 1837, appeared to be natural, and not to have been worked, or used as places of sepulture. See "Operations carried on at Gizeh," Vol. I. p. 10.