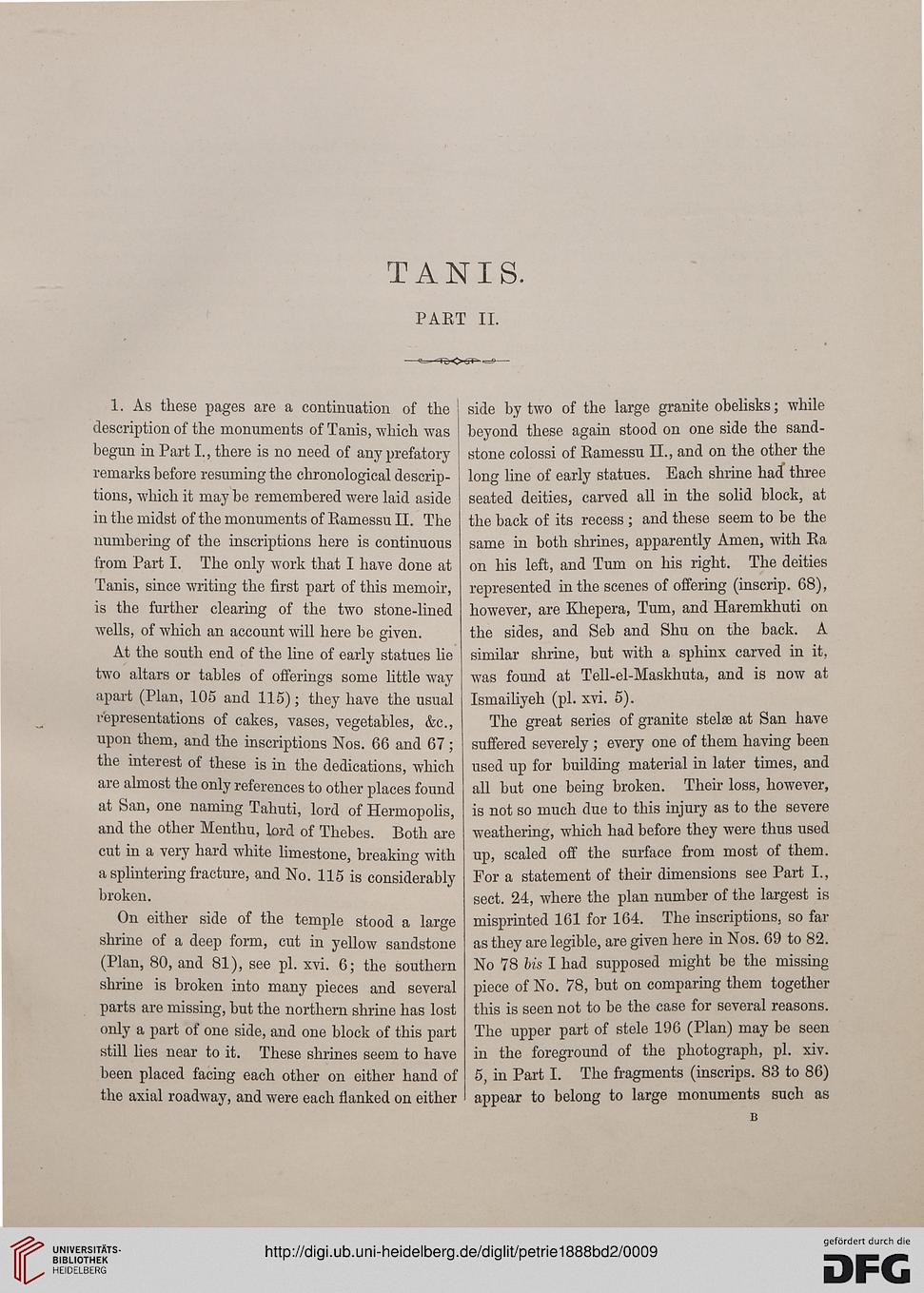 Ls tliese pages are a continuation of the
description of the monuments of Tanis, which was
begun in Part I., there is no need of any prefatory
remarks before resuming the chronological descrip-
tions, which it may be remembered were laid aside
in the midst of the monuments of Kamessu II. The
numbering of the inscriptions here is continuous
from Part I. The only work that I have done at
Tanis, since writing the first part of this memoir,
is the further clearing of the two stone-lined
wells, of which an account will here be given.

At the south end of the line of early statues lie
two altars or tables of offerings some little way
apart (Plan, 105 and 115); they have the usual
representations of cakes, vases, vegetables, &c,
upon them, and the inscriptions Nos. 66 and 67;
the interest of these is in the dedications, which
are almost the only references to other places found
at San, one naming Tahuti, lord of Hermopolis,
and the other Menthu, lord of Thebes. Both are
cut in a very hard white limestone, breaking with
a splintering fracture, and No. 115 is considerably
broken.

On either side of the temple stood a large
shrine of a deep form, cut in yellow sandstone
(Plan, 80, and 81), see pi. xvi. 6; the southern
shrine is broken into many pieces and several
parts are missing, but the northern shrine has lost
only a part of one side, and one block of this part
still lies near to it. These shrines seem to have
been placed facing each other on either hand of
the axial roadway, and were each flanked on either

side by two of the large granite obelisks; while
beyond these again stood on one side the sand-
stone colossi of Ramessu II., and on the other the
long line of early statues. Each shrine had" three
seated deities, carved all in the solid block, at
the back of its recess ; and these seem to be the
same in both shrines, apparently Amen, with Ra
on his left, and Turn on his right. The deities
represented in the scenes of offering (inscrip. 68),
however, are Khepera, Turn, and Haremkhuti on
the sides, and Seb and Shu on the back. A
similar shrine, but with a sphinx carved in it,
was found at Tell-el-Maskhuta, and is now at
Ismailiyeh (pi. xvi. 5).

The great series of granite stelae at San have
suffered severely ; every one of them having been
used up for building material in later times, and
all but one being broken. Their loss, however,
is not so much due to this injury as to the severe
weathering, which had before they were thus used
up, scaled off the surface from most of them.
For a statement of their dimensions see Part I.,
sect. 24, where the plan number of the largest is
misprinted 161 for 164. The inscriptions, so far
as they are legible, are given here in Nos. 69 to 82.
No 78 bis I had supposed might be the missing
piece of No. 78, but on comparing them together
this is seen not to be the case for several reasons.
The upper part of stele 196 (Plan) may be seen
in the foreground of the photograph, pi. xiv.
5, in Part I. The fragments (inscrips. 83 to 86)
appear to belong to large monuments such as