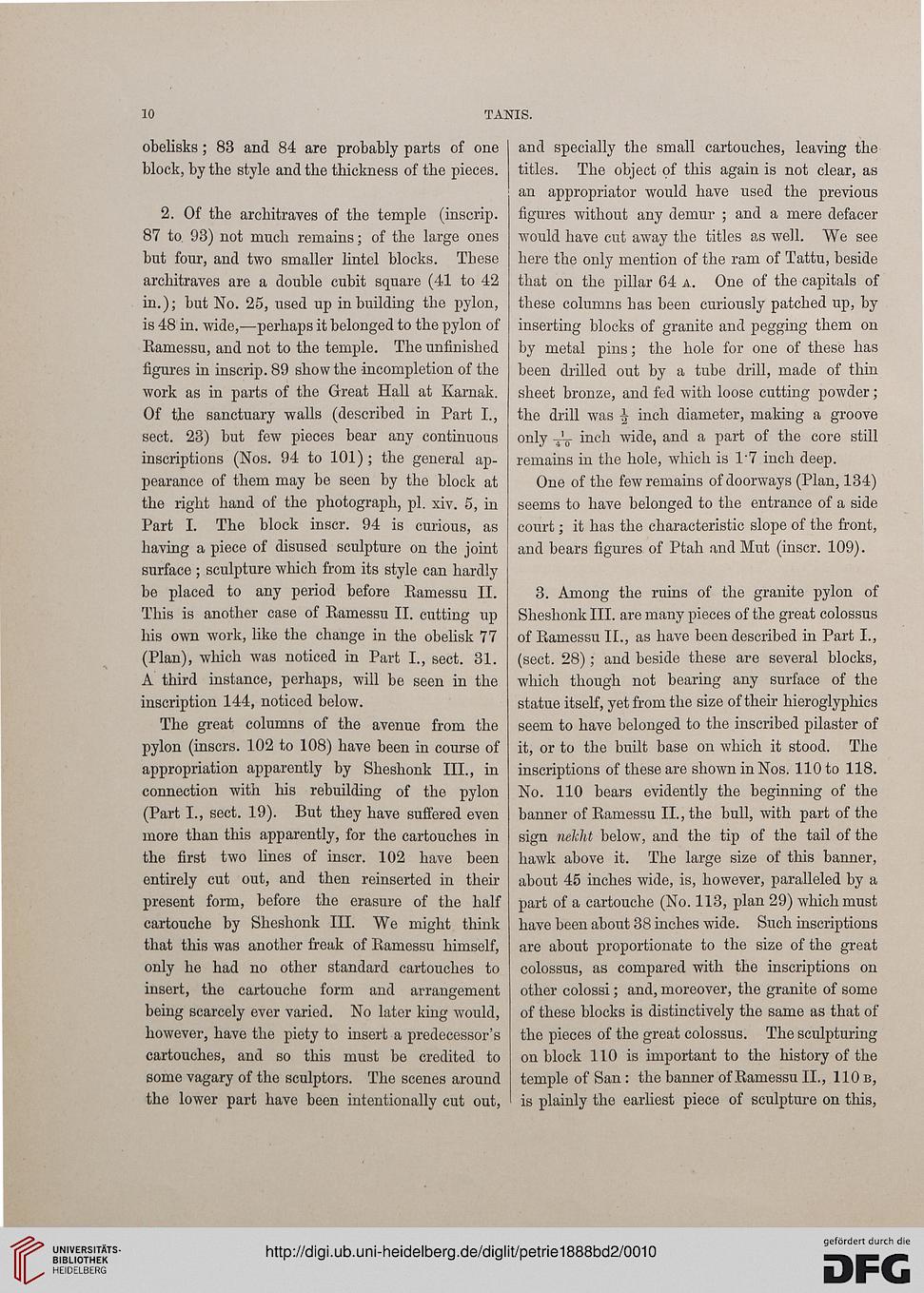 obelisks; 83 and 84 are probably parts of one
block, by the style and the thickness of the pieces.

2. Of the architraves of the temple (inscrip.
87 to. 93) not much remains; of the large ones
but four, and two smaller lintel blocks. These
architraves are a double cubit square (41 to 42
in.); but No. 25, used up in building the pylon,
is 48 in. wide,—perhaps it belonged to the pylon of
Ramessu, and not to the temple. The unfinished
figures in inscrip. 89 show the incompletion of the
work as in parts of the Great Hall at Karnak.
Of the sanctuary walls (described in Part I.,
sect. 23) but few pieces bear any continuous
inscriptions (Nos. 94 to 101); the general ap-
pearance of them may be seen by the block at
the right hand of the photograph, pi. xiv. 5, in
Part I. The block inscr. 94 is curious, as
having a piece of disused sculpture on the joint
surface ; sculpture which from its style can hardly
be placed to any period before Ramessu II.
This is another case of Ramessu II. cutting up
his own work, like the change in the obelisk 77
(Plan), which was noticed in Part I., sect. 31.
A third instance, perhaps, will be seen in the
inscription 144, noticed below.

The great columns of the avenue from the
pylon (inscrs. 102 to 108) have been in course of
appropriation apparently by Sheshonk III., in
connection with his rebuilding of the pylon
(Part I., sect. 19). But they have suffered even
more than this apparently, for the cartouches in
the first two lines of inscr. 102 have been
entirely cut out, and then reinserted in their
present form, before the erasure of the half
cartouche by Sheshonk III. We might think
that this was another freak of Ramessu himself,
only he had no other standard cartouches to
insert, the cartouche form and arrangement
being scarcely ever varied. No later king would,
however, have the piety to insert a predecessor's
cartouches, and so this must be credited to
some vagary of the sculptors. The scenes around
the lower part have been intentionally cut out,

and specially the small cartouches, leaving the
titles. The object of this again is not clear, as
an appropriator would have used the previous
figures without any demur ; and a mere defacer
would have cut away the titles as well. We see
here the only mention of the ram of Tattu, beside
that on the pillar 64 a. One of the capitals of
these columns has been curiously patched up, by
inserting blocks of granite and pegging them on
by metal pins; the hole for one of these has
been drilled out by a tube drill, made of thin
sheet bronze, and fed with loose cutting powder ;
the drill was ^ inch diameter, making a groove
only T'T inch wide, and a part of the core still
remains in the hole, which is 1'7 inch deep.

One of the few remains of doorways (Plan, 134)
seems to have belonged to the entrance of a side
court; it has the characteristic slope of the front,
and bears figures of Ptah and Mut (inscr. 109).

3. Among the ruins of the granite pylon of
Sheshonk III. are many pieces of the great colossus
of Ramessu II., as have been described in Part I.,
(sect. 28); and beside these are several blocks,
which though not bearing any surface of the
statue itself, yet from the size of their hieroglyphics
seem to have belonged to the inscribed pilaster of
it, or to the built base on which it stood. The
inscriptions of these are shown in Nos. 110 to 118.
No. 110 bears evidently the beginning of the
banner of Ramessu II., the bull, with part of the
sign nekht below, and the tip of the tail of the
hawk above it. The large size of this banner,
about 45 inches wide, is, however, paralleled by a
part of a cartouche (No. 113, plan 29) which must
have been about 38 inches wide. Such inscriptions
are about proportionate to the size of the great
colossus, as compared with the inscriptions on
other colossi; and, moreover, the granite of some
of these blocks is distinctively the same as that of
the pieces of the great colossus. The sculpturing
on block 110 is important to the history of the
temple of San: the banner of Ramessu II., 110 b,
is plainly the earliest piece of sculpture on this,