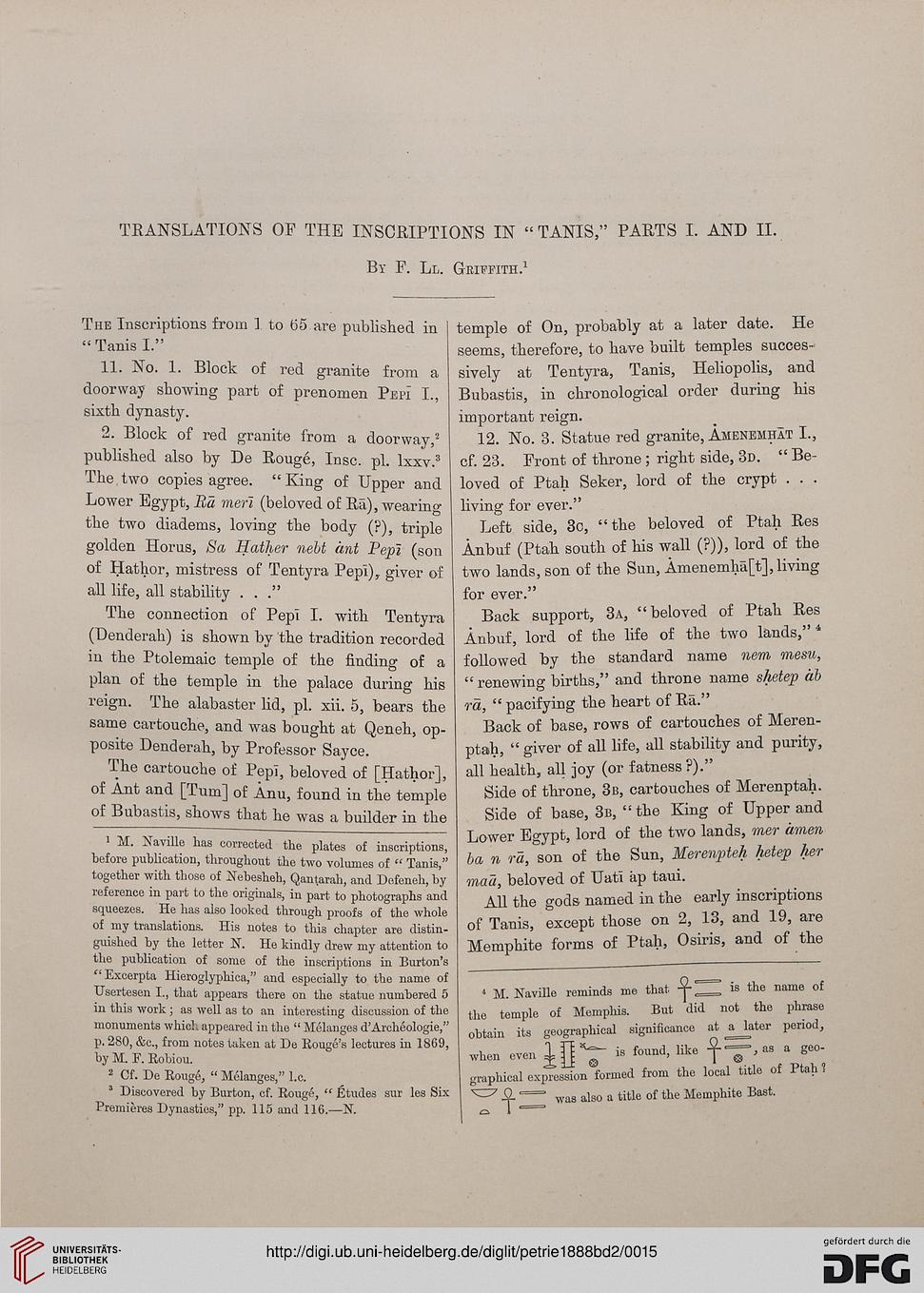 Information about OCR text
TRANSLATIONS OF THE INSCRIPTIONS IN "TANIS," PARTS I. AND II.

The Inscriptions from 1 to 65 are published in
"Tanis I."

11. No. 1. Block of red granite from a
doorway showing part of prenomen Pepi I.,
sixth dynasty.

The connection of Pepi I. with Tentyra
(Denderah) is shown by the tradition recorded
in the Ptolemaic temple of the finding of a
plan of the temple in the palace during his
reign. The alabaster lid, pi. xii. 5, bears the
same cartouche, and was bought at Qeneh, op-
posite Denderah, by Professor Sayce.

The cartouche of Pepi, beloved of [Hathor],
of Ant and [Turn] of Anu, found in the temple
of Bubastis, shows that he was a builder in the

1 M. Naville has corrected the plates of inscriptions,
before publication, throughout the two volumes of " Tanis,"
together with those of JTebesheh, Qantarah, and Defeneh, by
reference in part to the originals, in part to photographs and
squeezes. He has also looked through proofs of the whole
of my translations. His notes to this chapter are distin-
guished by the letter N. He kindly drew my attention to
the publication of some of the inscriptions in Burton's
"Excerpta Hieroglyphica," and especially to the name of
Usertesen I., that appears there on the statue numbered 5
in this work ; as well as to an interesting discussion of the
monuments which appeared in the " Melanges d'Archeologie,"
p. 280, &c, from notes taken at De Rouge's lectures in 1869,
by M. F. Robiou.

temple of On, probably at a later date. He
seems, therefore, to have built temples succes-
sively at Tentyra, Tanis, Heliopolis, and
Bubastis, in chronological order during his
important reign.

Left side, 3c, "the beloved of Ptah Res
Anbuf (Ptah south of his wall (?)), lord of the
two lands, son of the Sun, Amenemha[t], living

Back support, 3a, "beloved of Ptah Res
Anbuf, lord of the life of the two lands," *
followed by the standard name nem mesu,
" renewing births," and throne name shetep ab
ra, " pacifying the heart of Ra."

Back of base, rows of cartouches of Meren-
ptah, " giver of all life, all stability and purity,
all health, all joy (or fatness ?)."

Side of throne, 3 b, cartouches of Merenptah.

Side of base, 3b, "the King of Upper and
Lower Egypt, lord of the two lands, mer amen
ba n ra, son of the Sun, Merenptek hetep her
mad,, beloved of Uati ap taui.

All the gods named in the early inscriptions
of Tanis, except those on 2, 13, and 19, are
Memphite forms of Ptah, Osiris, and of the

« M. Naville reminds me that ^-<=== is the name of
the temple of Memphis. But did not the phrase
obtain its geographical significance at _ajater period,

when even i Q ^ is found> like f T>™ * g*°'
graphical expression formed from the local title of Ptah?
~ SL ^ was also a title of the Memphite Bast.