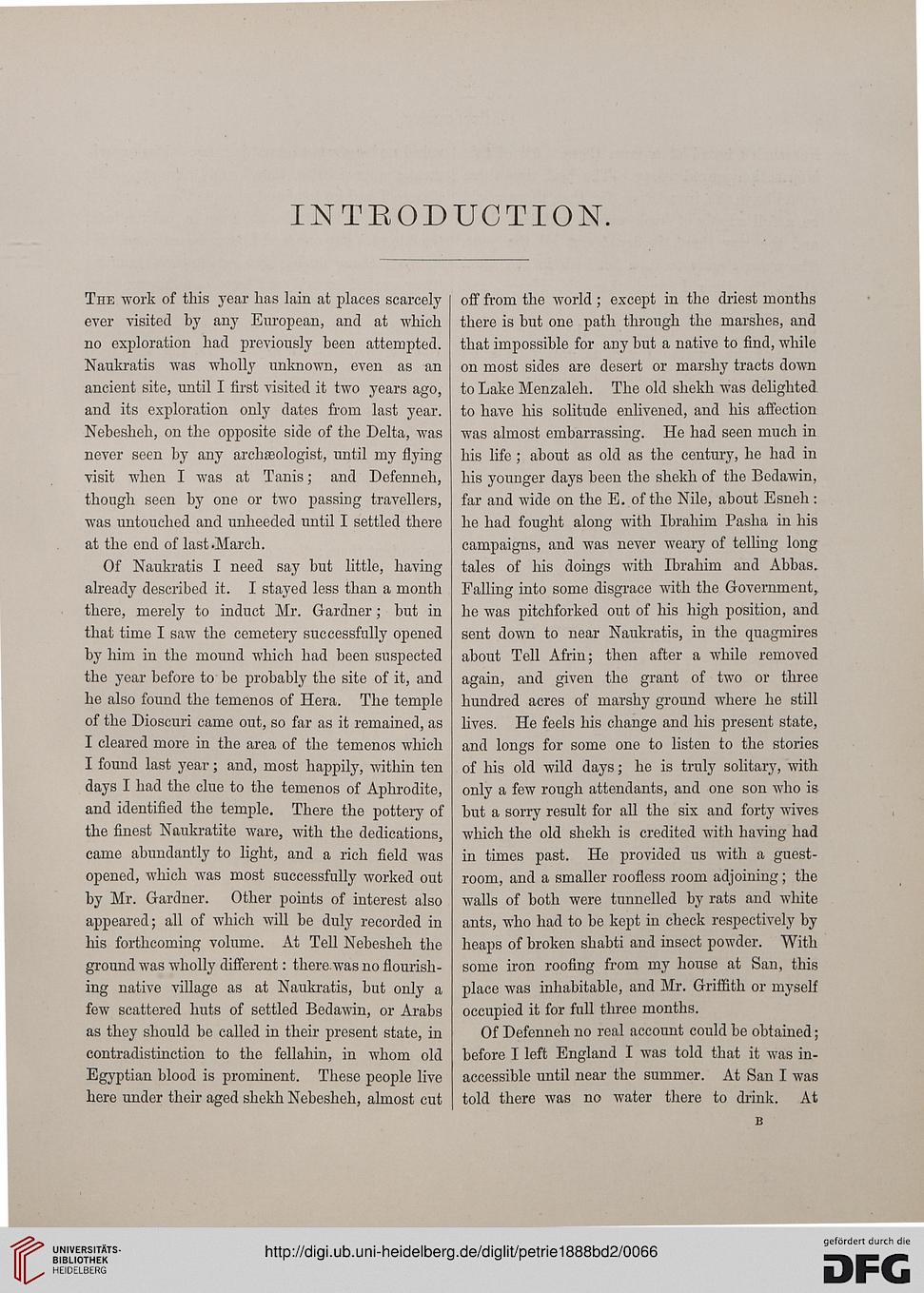 The work of this year has lain at places scarcely
ever visited by any European, and at which
no exploration had previously been attempted.
Naukratis was wholly unknown, even as an
ancient site, until I first visited it two years ago,
and its exploration only dates from last year.
Nebesheh, on the opposite side of the Delta, was
never seen by any archaeologist, until my flying
visit when I was at Tanis; and Defenneh,
though seen by one or two passing travellers,
was untouched and unheeded until I settled there
at the end of last .March.

Of Naukratis I need say but little, having
already described it. I stayed less than a month
there, merely to induct Mr. Gardner; but in
that time I saw the cemetery successfully opened
by him in the mound which had been suspected
the year before to be probably the site of it, and
he also found the temenos of Hera. The temple
of the Dioscuri came out, so far as it remained, as
I cleared more in the area of the temenos which
I found last year; and, most happily, within ten
days I had the clue to the temenos of Aphrodite,
and identified the temple. There the pottery of
the finest Naukratite ware, with the dedications,
came abundantly to light, and a rich field was
opened, which was most successfully worked out
by Mr. Gardner. Other points of interest also
appeared; all of which will be duly recorded in
his forthcoming volume. At Tell Nebesheh the
ground was wholly different: there.was no flourish-
ing native village as at Naukratis, but only a
few scattered huts of settled Bedawin, or Arabs
as they should be called in their present state, in
contradistinction to the fellahin, in whom old
Egyptian blood is prominent. These people live
here under their aged shekh Nebesheh, almost cut

off from the world; except in the driest months
there is but one path through the marshes, and
that impossible for any but a native to find, while
on most sides are desert or marshy tracts down
to Lake Menzaleh. The old shekh was delighted
to have his solitude enlivened, and his affection
was almost embarrassing. He had seen much in
his life; about as old as the century, he had in
his younger days been the shekh of the Bedawin,
far and wide on the E. of the Nile, about Esneh :
he had fought along with Ibrahim Pasha in his
campaigns, and was never weary of telling long
tales of his doings with Ibrahim and Abbas.
Falling into some disgrace with the Government,
he was pitchforked out of his high position, and
sent down to near Naukratis, in the quagmires
about Tell Afrin; then after a while removed
again, and given the grant of two or three
hundred acres of marshy ground where he still
lives. He feels his change and his present state,
and longs for some one to listen to the stories
of his old wild days; he is truly solitary, with
only a few rough attendants, and one son who is
but a sorry result for all the six and forty wives
which the old shekh is credited with having had
in times past. He provided us with a guest-
room, and a smaller roofless room adjoining; the
walls of both were tunnelled by rats and white
ants, who had to be kept in check respectively by
heaps of broken shabti and insect powder. With
some iron roofing from my house at San, this
place was inhabitable, and Mr. Griffith or myself
occupied it for full three months.

Of Defenneh no real account could be obtained;
before I left England I was told that it was in-
accessible until near the summer. At San I was
told there was no water there to drink. At