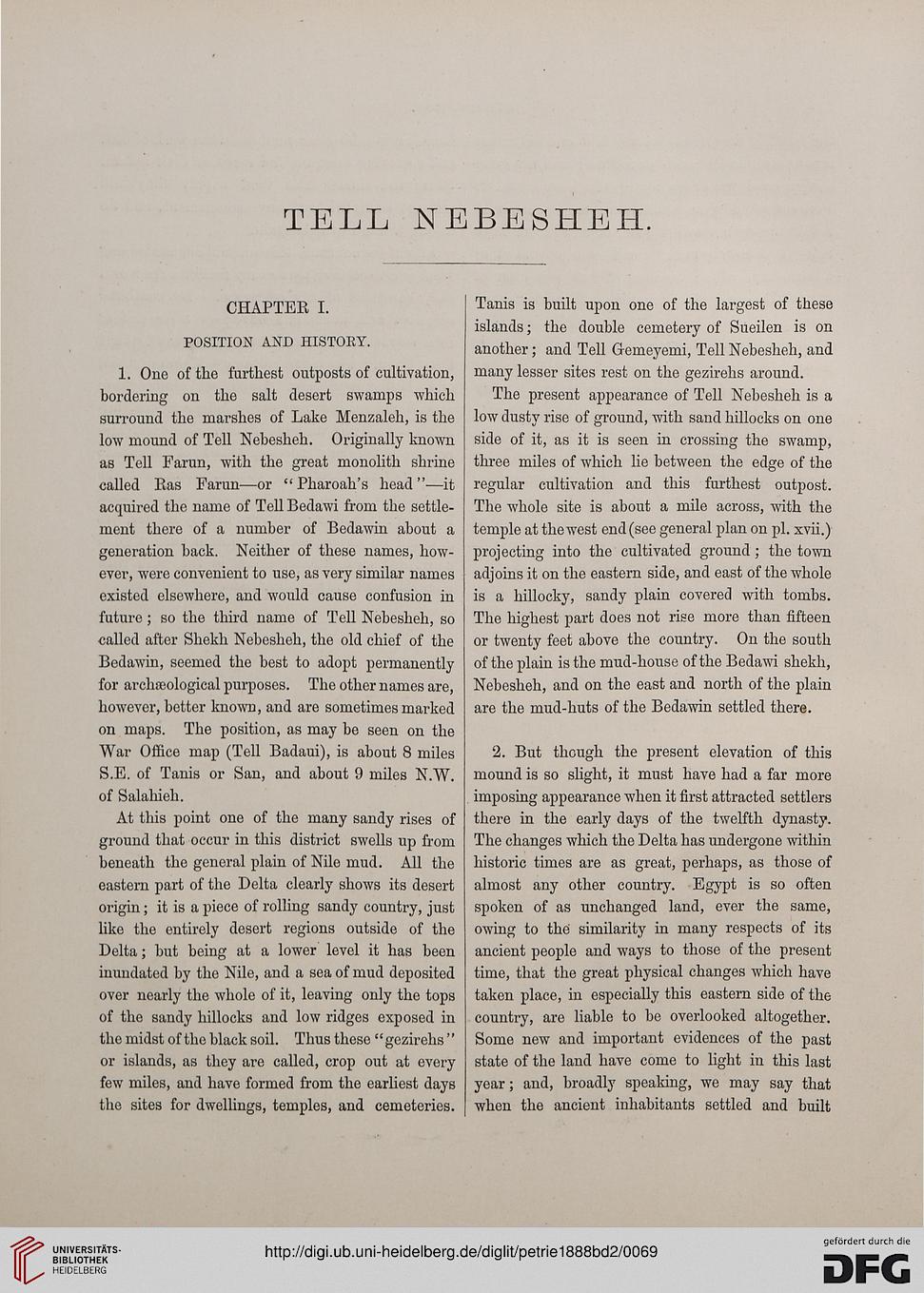 1. One of the furthest outposts of cultivation,
bordering on the salt desert swamps which
surround the marshes of Lake Menzaleh, is the
low mound of Tell Nebesheh. Originally known
as Tell Farun, with the great monolith shrine
called Eas Farun—or " Pharoah's head"—it
acquired the name of Tell Bedawi from the settle-
ment there of a number of Bedawin about a
generation back. Neither of these names, how-
ever, were convenient to use, as very similar names
existed elsewhere, and would cause confusion in
future; so the third name of Tell Nebesheh, so
called after Shekh Nebesheh, the old chief of the
Bedawin, seemed the best to adopt permanently
for archaeological purposes. The other names are,
however, better known, and are sometimes marked
on maps. The position, as may be seen on the
War Office map (Tell Badaui), is about 8 miles
S.E. of Tanis or San, and about 9 miles N.W.
of Salahieh.

At this point one of the many sandy rises of
ground that occur in this district swells up from
beneath the general plain of Nile mud. All the
eastern part of the Delta clearly shows its desert
origin; it is a piece of rolling sandy country, just
like the entirely desert regions outside of the
Delta; but being at a lower level it has been
inundated by the Nile, and a sea of mud deposited
over nearly the whole of it, leaving only the tops
of the sandy hillocks and low ridges exposed in
the midst of the black soil. Thus these "gezirehs "
or islands, as they are called, crop out at every
few miles, and have formed from the earliest days
the sites for dwellings, temples, and cemeteries.

Tanis is built upon one of the largest of these
islands; the double cemetery of Sueilen is on
another; and Tell Gemeyemi, Tell Nebesheh, and
many lesser sites rest on the gezirehs around.

The present appearance of Tell Nebesheh is a
low dusty rise of ground, with sand hillocks on one
side of it, as it is seen in crossing the swamp,
three miles of which lie between the edge of the
regular cultivation and this furthest outpost.
The whole site is about a mile across, with the
temple at the west end (see general plan on pi. xvii.)
projecting into the cultivated ground; the town
adjoins it on the eastern side, and east of the whole
is a hillocky, sandy plain covered with tombs.
The highest part does not rise more than fifteen
or twenty feet above the country. On the south
of the plain is the mud-house of the Bedawi shekh,
Nebesheh, and on the east and north of the plain
are the mud-huts of the Bedawin settled there.

2. But though the present elevation of this
mound is so slight, it must have had a far more
imposing appearance when it first attracted settlers
there in the early days of the twelfth dynasty.
The changes which the Delta has undergone within
historic times are as great, perhaps, as those of
almost any other country. Egypt is so often
spoken of as unchanged land, ever the same,
owing to the similarity in many respects of its
ancient people and ways to those of the present
time, that the great physical changes which have
taken place, in especially this eastern side of the
country, are liable to be overlooked altogether.
Some new and important evidences of the past
state of the land have come to light in this last
year; and, broadly speaking, we may say that
when the ancient inhabitants settled and built