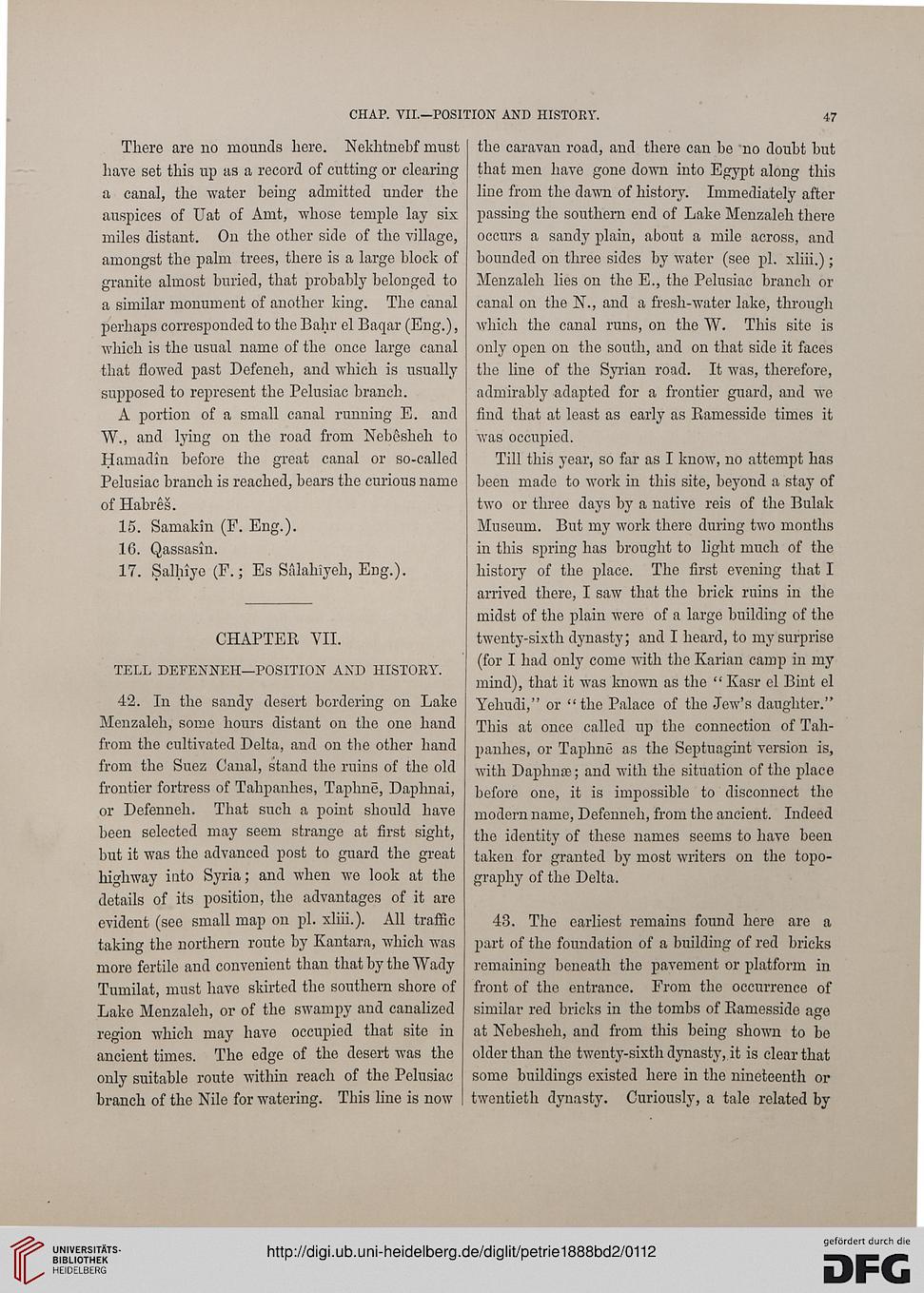 There are no mounds here. Nekhtnebf must
have set this up as a record of cutting or clearing
a canal, the water being admitted under the
auspices of Uat of Amt, whose temple lay six
miles distant. On the other side of the village,
amongst the palm trees, there is a large block of
granite almost buried, that probably belonged to
a similar monument of another king. The canal
perhaps corresponded to the Bahr el Baqar (Eng.),
which is the usual name of the once large canal
that flowed past Defeneh, and which is usually
supposed to represent the Pelusiac branch.

A portion of a small canal running E. and
W., and lying on the road from Nebesheh to
Hamadin before the great canal or so-called
Pelnsiac branch is reached, bears the curious name
of Habres.

42. In the sandy desert bordering on Lake
Menzaleh, some hours distant on the one hand
from the cultivated Delta, and on the other hand
from the Suez Canal, stand the ruins of the old
frontier fortress of Tahpanhes, Taphne, Daphnai,
or Defenneh. That such a point should have
been selected may seem strange at first sight,
but it was the advanced post to guard the great
highway into Syria; and when we look at the
details of its position, the advantages of it are
evident (see small map on pi. xliii.). All traffic
taking the northern route by Kantara, which was
more fertile and convenient than that by the Wady
Tumilat, must have skirted the southern shore of
Lake Menzaleh, or of the swampy and canalized
region which may have occupied that site in
ancient times. The edge of the desert was the
only suitable route within reach of the Pelusiac
branch of the Nile for watering. This line is now

the caravan road, and there can be no doubt but
that men have gone down into Egypt along this
line from the dawn of history. Immediately after
passing the southern end of Lake Menzaleh there
occurs a sandy plain, about a mile across, and
bounded on three sides by water (see pi. xliii.);
Menzaleh lies on the E., the Pelusiac branch or
canal on the N., and a fresh-water lake, through
which the canal runs, on the W. This site is
only open on the south, and on that side it faces
the line of the Syrian road. It was, therefore,
admirably adapted for a frontier guard, and we
find that at least as early as Eamesside times it
was occupied.

Till this year, so far as I know, no attempt has
been made to work in this site, beyond a stay of
two or three days by a native reis of the Bulak
Museum. But my work there during two months
in this spring has brought to light much of the
history of the place. The first evening that I
arrived there, I saw that the brick ruins in the
midst of the plain were of a large building of the
twenty-sixth dynasty; and I heard, to my surprise
(for I had only come with the Kariari camp in my
mind), that it was known as the " Kasr el Bint el
Yehudi," or "the Palace of the Jew's daughter."
This at once called up the connection of Tah-
panhes, or Taphne as the Septuagint version is,
with Daphnai; and with the situation of the place
before one, it is impossible to disconnect the
modern name, Defenneh, from the ancient. Indeed
the identity of these names seems to have been
taken for granted by most writers on the topo-
graphy of the Delta.

43. The earliest remains found here are a
part of the foundation of a building of red bricks
remaining beneath the pavement or platform in.
front of the entrance. From the occurrence of
similar red bricks in the tombs of Eamesside age
at Nebesheh, and from this being shown to be
older than the twenty-sixth dynasty, it is clear that
some buildings existed here in the nineteenth or
twentieth dynasty. Curiously, a tale related by