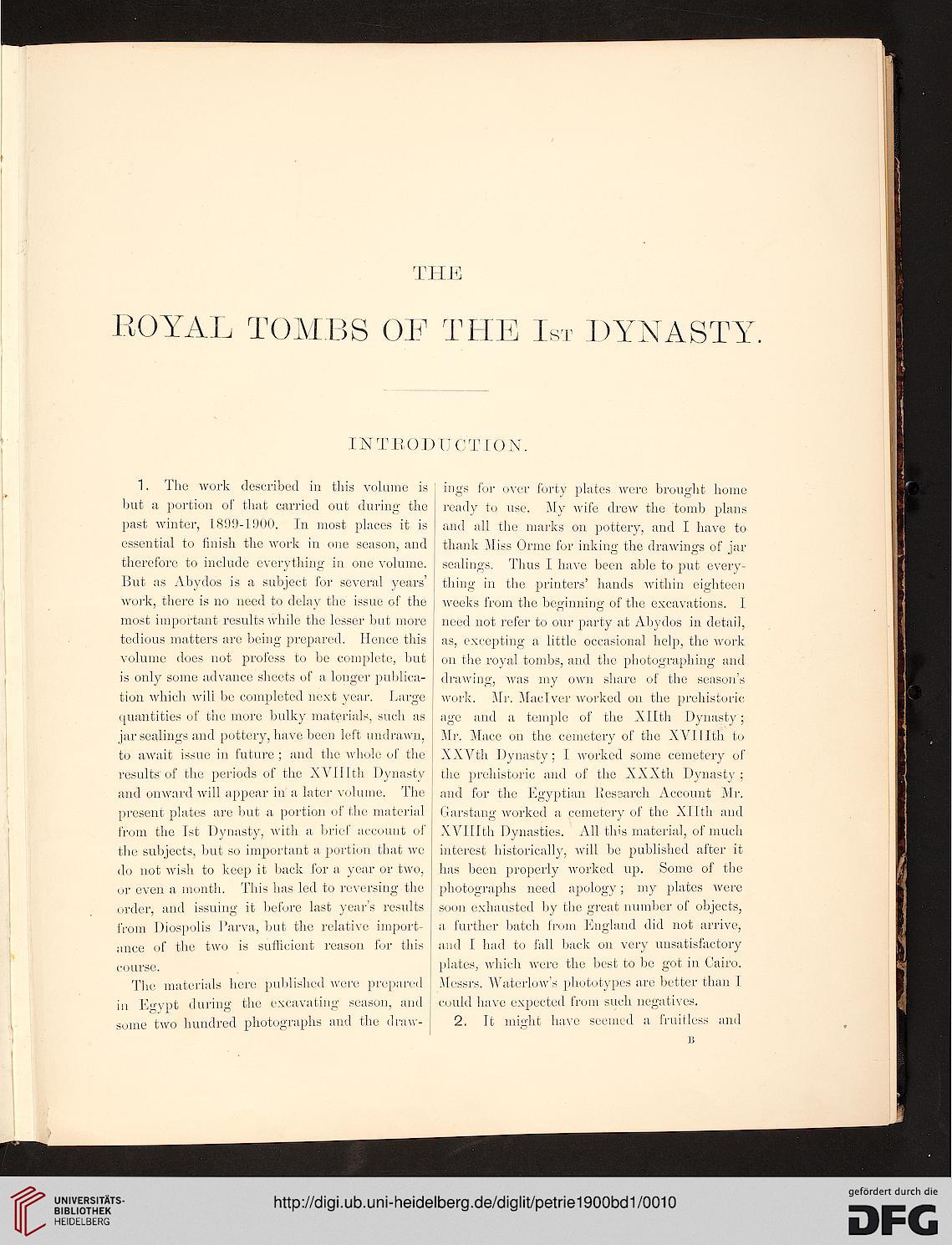 Information about OCR text
THE

KOYAL TOMBS OF THE 1st DYNASTY

1. The work described in this volume is
but a portion of that carried out during the
past winter, 1899-1900. In most places it is
essential to finish the work in one season, and
therefore to include everything in one volume.
But as Abydos is a subject for several years'
work, there is no need to delay the issue of the
most important results while the lesser but more
tedious matters are being prepared. Hence this
volume does not profess to be complete, but
is only some advance sheets of a longer publica-
tion which will be completed next year. large
quantities of the more bulky materials, such as
jar searings and pottery, have been left undrawn,
to await issue in future ; and the whole of the
results of the periods of the XVIIIth Dynasty
and onward will appear in a later volume. The
present plates are but a portion of the material
from the 1st Dynasty, with a brief account of
the subjects, but so important a portion that Ave
do not wish to keep it back for a year or two,
or even a month. This has led to reversing the
order, and issuing it before last year's results
from Diospolis Parva, but the relative import-
ance of the two is sufficient reason for this

The materials here published were prepared
in Egypt during the excavating season, and
some two hundred photographs and the draw-

ings for over forty plates were brought home
ready to use. My wife dreAv the tomb plans
and all the marks on pottery, and I have to
thank Miss Orme for inking the drawings of jar
sealings. Thus I have been able to put every-
thing in the printers' hands within eighteen
weeks from the beginning of the excavations. I
need not refer to our party at Abydos in detail,
as, excepting a little occasional help, the work
on the royal tombs, and the photographing and
drawing, was my own share of the season's
work. Mr. MacTver worked on the prehistoric
age and a temple of the Xllth Dynasty;
Mr. Mace on the cemetery of the XVIIIth to
XXVth Dynasty; I worked some cemetery of
the prehistoric and of the XXXth Dynasty ;
and for the Egyptian ResBarch Account Mr.
Garstang worked a cemetery of the Xllth and
XVIIIth Dynasties. All this material, of much
interest historically, will be published after it
has been properly worked up. Some of the
photographs need apology; my plates were
soon exhausted by the great number of objects,
a further batch from England did not arrive,
and I had to fall back on very unsatisfactory
plates, which were the best to be got in Cairo.
Messrs. Waterlow's phototypes are better than I
could have expected from such negatives.