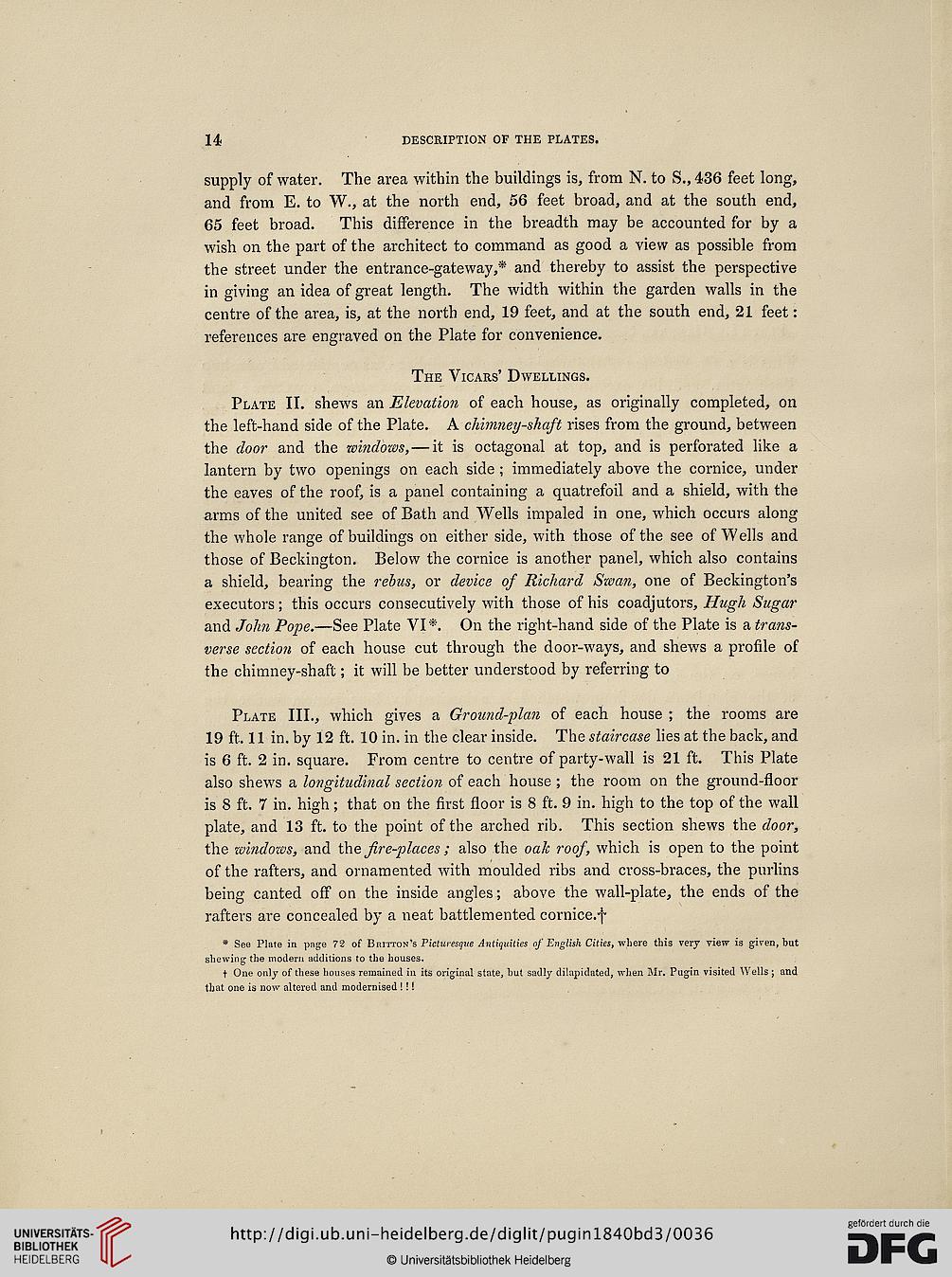 supply of water. The area within the buildings is, from N. to S., 436 feet long,
and from E. to W., at the north end, 56 feet broad, and at the south end,
65 feet broad. This difference in the breadth may be accounted for by a
wish on the part of the architect to command as good a view as possible from
the street under the entrance-gateway,* and thereby to assist the perspective
in giving an idea of great length. The width within the garden walls in the
centre of the area, is, at the north end, 19 feet, and at the south end, 21 feet:
references are engraved on the Plate for convenience.

Plate II. shews an Elevatioji of each house, as originally completed, on
the left-hand side of the Plate. A chinuiey-shaft rises from the ground, between
the dooj' and the whidows,—it is octagonal at top, and is perforated like a
lantern by two openings on each side ; immediately above the cornice, under
the eaves of the roof, is a panel containing a quatrefoil and a shield, with the
arms of the united see of Bath and Wells impaled in one, which occurs along
the whole range of buildings on either side, with those of the see of Wells and
those of Beckington. Below the cornice is another panel, which also contains
a shield, bearing the rebus, or device of Richard Swaji, one of Beckington’s
executors; this occurs consecutively with those of his coadjutors, Hugh Sugar
and Johi Pope.—See Plate VI *. On the right-hand side of the Plate is a trajis-
verse sectioji of each house cut through the door-ways, and shews a profile of
the chimney-shaft; it will be better understood by referring to

Plate III., which gives a Groimd-plaji of each house ; the rooms are
19 ft. 11 in. by 12 ft. 10 in. in the clear inside. The staircase lies at the back, and
is 6 ft. 2 in. square. From centre to centre of party-wall is 21 ft. This Plate
also shews a lojigitudhial sectioji of each house ; the room on the ground-floor
is 8 ft. 7 in. high; that on the first floor is 8 ft. 9 in. high to the top of the wall
plate, and 13 ft. to the point of the arched rib. This section shews the door,
the whidows, and the fire-places; also the oak roof, which is open to the point
of the rafters, and ornamented with moulded ribs and cross-braces, the purlins
being canted off on the inside angles; above the wall-plate, the ends of the
rafters are concealed by a neat battlemented cornice.f

* See Plate in page 72 of Britton’s Picturesque Antiquities of English Cities, wbere this very view is given, but
sbewing tbe modern additions to tbe bouses.

t One only of tliese houses remained in its original state, but sadty dilapidated, wben Mr. Pugin visited Wells; and
tbat one is now altered and modernised !!!