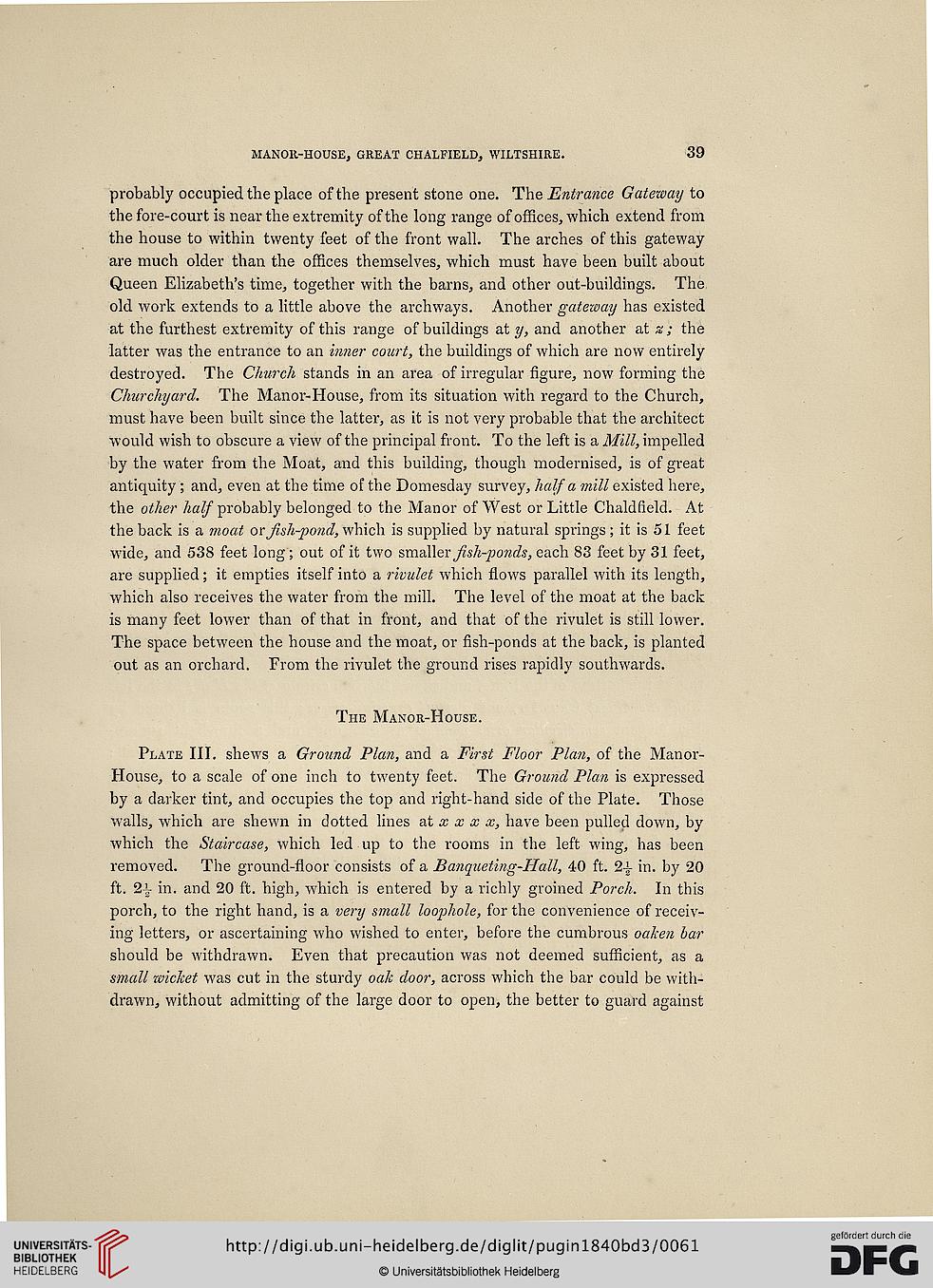 probably occupied the place of the present stone one. The Entrance Gateway to
the fore-court is near the extremity of the long range of offices, which extend from
the house to within twenty feet of the front wall. The arches of this gateway
are much older than the offices themselves, which must have heen huilt ahout
Queen Elizabeth’s time, together with the barns, and other out-buildings. The
old work extends to a little ahove the archways. Another gateway has existed
at the furthest extremity of this range of buildings at y, and another at ss; the
latter was the entrance to an inner court, the huildings of wliich are now entirely
destroyed. The Church stands in an area of irregular figure, now forming the
Churchyard. The Manor-House, from its situation with regard to the Church,
must have been built since the latter, as it is not very probable that the architect
would wish to obscure a view of the principal front. To the left is a Mill, impelled
by the water from the Moat, and this building, though modernised, is of great
antiquity ; and, even at the time of the Domesday survey, halfa mill existed here,
the other half prohably belonged to the Manor of West or Little Chaldfield. At
the back is a moat or Jish-pond, which is supplied hy natural springs ; it is 51 feet
wide, and 538 feet long; out of it two smaller fish-ponds, each 83 feet by 31 feet,
are supplied; it empties itself into a rivulet which flows parallel with its length,
which also receives the water from the mill. The level of the moat at the back
is many feet lower than of that in front, and that of the rivulet is still lower.
The space between the house and the moat, or fish-ponds at the back, is planted
out as an orchard. From the rivulet the ground rises rapidly southwards.

Plate III. shews a Ground Plan, and a First Floor Plan, of the Manor-
House, to a scale of one inch to twenty feet. The Ground Plan is expressed
by a darker tint, and occupies the top and right-hand side of the Plate. Those
walls, which are shewn in dotted lines at X X X X} have been pulled down, by
which the Stcdrcase, which led up to the rooms in the left wing, has been
removed. The ground-floor consists of a Banqueting-Hall, 40 ft. 2-f- in. by 20
ft. 2u in. and 20 ft. high, which is entered by a richly groined Porch. In this
porch, to the right hand, is a very small loophole, for the convenience of receiv-
ing letters, or ascertaining who wished to enter, before the cumbrous oahen bar
should be withdrawn. Even that precaution was not deemed sufficient, as a
small wiclcet was cut in the sturdy oak door, across which the bar could be with-
drawn, without admitting of the large door to open, the better to guard against