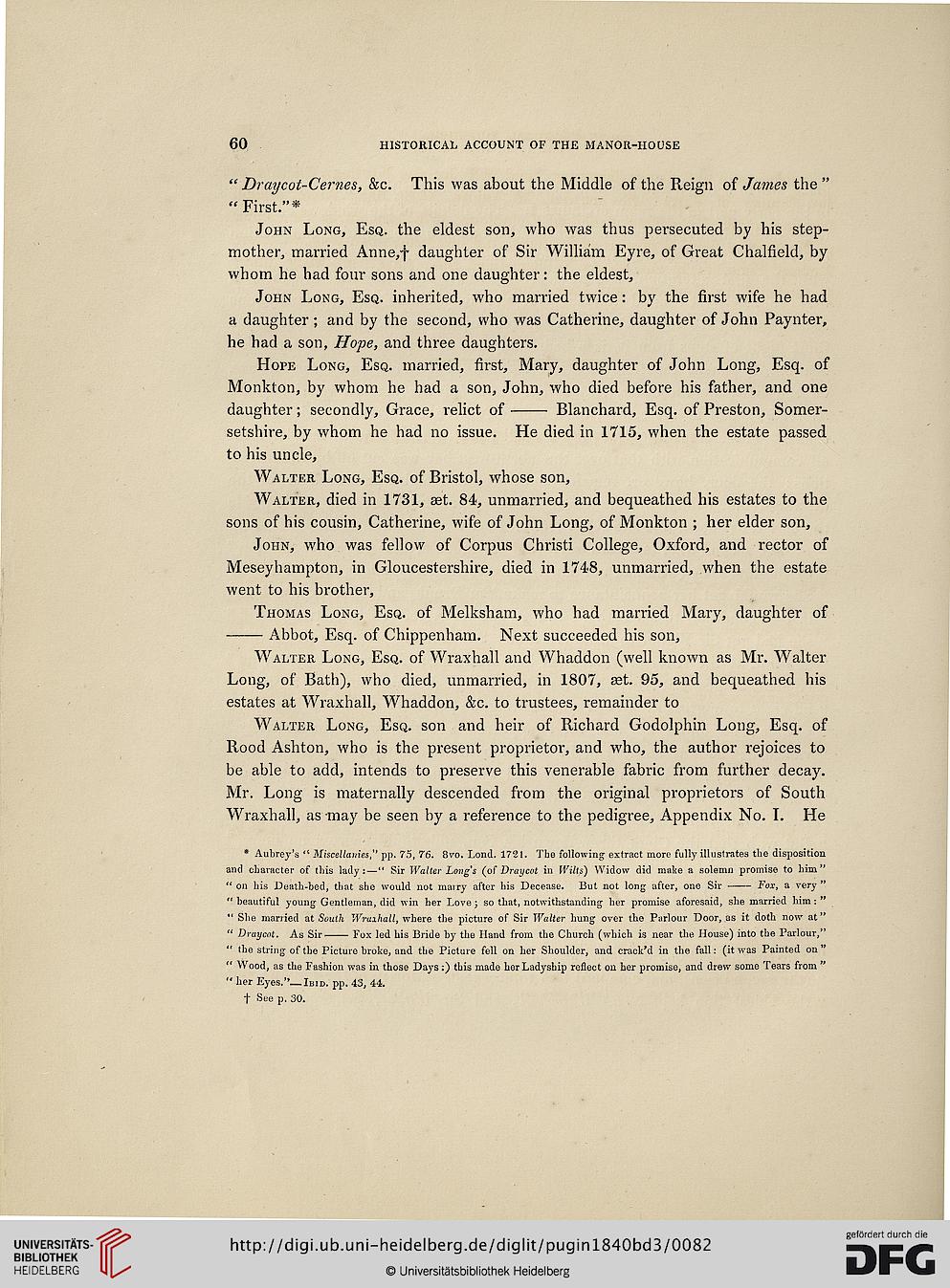 “ Draijcot-Cernes, &c. This was about the Middle of the Reign of James the ”
“ First.”*

John Long, Esq. the eldest son, who was thus persecuted by his step-
mother, married Anne,f daughter of Sir William Eyre, of Great Chalfield, by
whom he had four sons and one daughter: the eldest,

John Long, Esq. inherited, who married twice: by the first wife he had
a daughter; and by the second, who was Catherine, daughter of John Paynter,
he had a son, Hope, and three daughters.

Hope Long, Esq. married, first, Mary, daughter of John Long, Esq. of
Monkton, by whom he had a son, John, who died before his father, and one

setshire, by whom he had no issue. He died in 1715, when the estate passed
to his uncle,

Walter, died in 1731, aet. 84, unmarried, and bequeathed his estates to the
sons of his cousin, Catherine, wife of John Long, of Monkton ; her elder son,

John, who was fellow of Corpus Christi College, Oxford, and rector of
Meseyhampton, in Gloucestershire, died in 1748, unmarried, when the estate
went to his brother,

Thomas Long, Esq. of Melksham, who had married Mary, daughter of
-Abbot, Esq. of Chippenham. Next succeeded his son,

Walter Long, Esq. of Wraxhall and Whaddon (well known as Mr. Walter
Long, of Bath), who died, unmarried, in 1807, set. 95, and bequeathed his
estates at Wraxhall, Whaddon, &c. to trustees, remainder to

Walter Long, Esq. son and heir of Richard Godolphin Long, Esq. of
Rood Ashton, who is the present proprietor, and who, the author rejoices to
be able to add, intends to preserve this venerable fabric from further decay.
Mr. Long is maternally descended from the original proprietors of South
Wraxhall, as may be seen by a reference to the pedigree, Appendix No. I. He

* Aubrey’s “ Miscellanies,” pp. 75, 76. 8vo. Lond. 1721. The following extract more fully illustrates tlie disposition
and chavacter of this lady :—“ Sir Walter Long's (of Draycot in Wilts) Widow did make a solemn promise to him”

“ on his Death-bed, that she vvould not mairy after his Decease. But not long after, one Sir-Fox, a very ”

" beautiful young Gentleman, did win her Love ; so that, notwithstanding her promise aforesaid, she married liim: ”
“ She married at South Wraihall, where the picture of Sir Walter hung over the Parlour Door, as it doth now at”

“ Druycot. As Sir-Fox led his Bride hy the Iland from the Church (which is near the House) into the Parlour,”