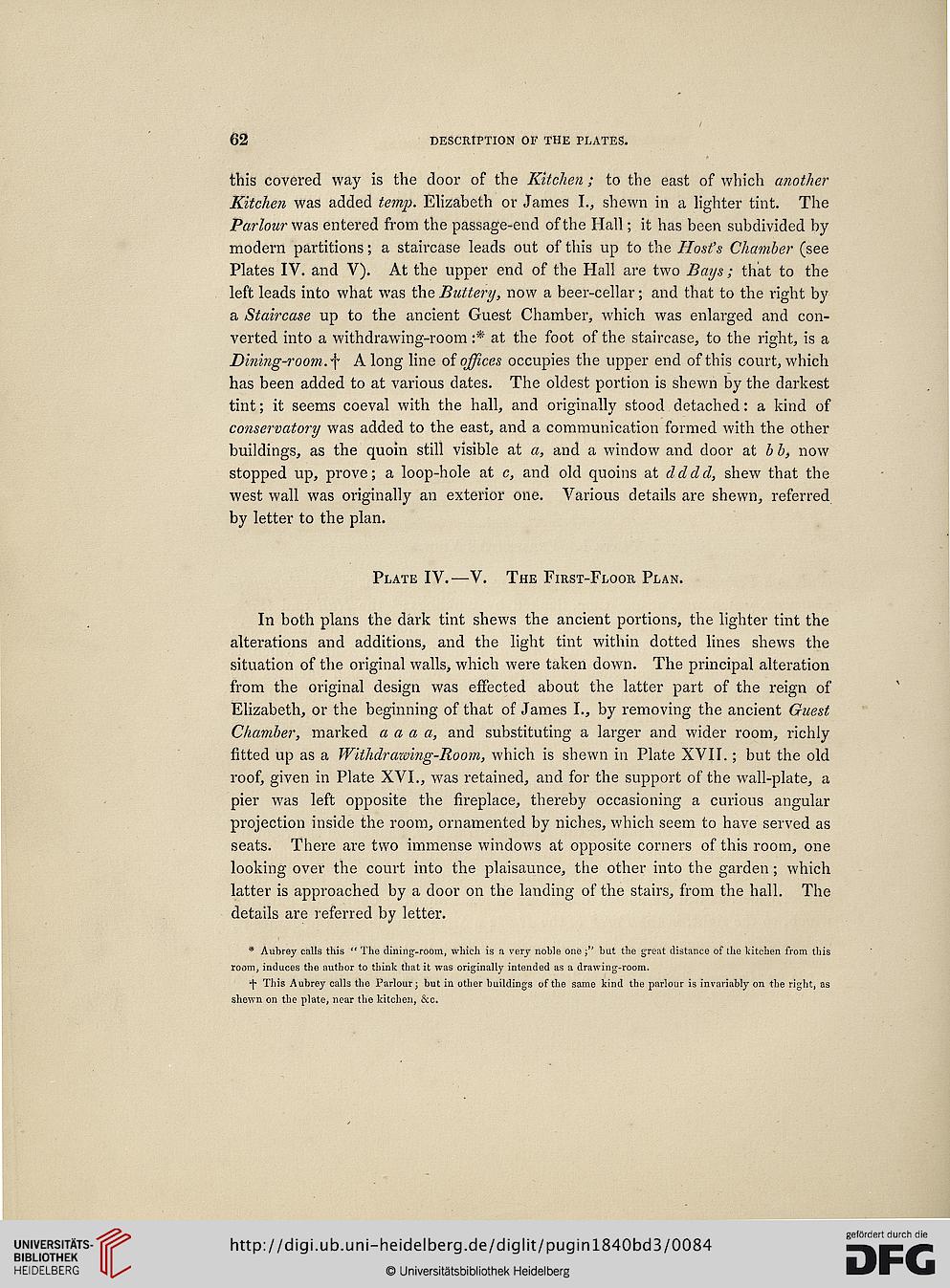 this covered way is the door of the Kitchen; to the east of whicli another
Kitchen was added temp. Elizabeth or James I., shewn in a lighter tint. The
Parlour was entered from the passage-end ofthe Hall; it has been subdivided by
modern partitions; a staircase leads out of this up to the Hosfs Chamher (see
Plates IV. and V). At the upper end of the Hall are two Bays; that to the
left leads into what was the Buttery, now a beer-cellar; and that to the right by
a Staircase up to the ancient Guest Chamber, which was enlarged and con-
verted into a withdrawing-room :* at the foot of the staircase, to the right, is a
Dining-room.f A long line of offices occupies the upper end of this court, which
has been added to at various dates. The oldest portion is shewn by the darkest
tint; it seems coeval with the hall, and originally stood detached: a kind of
conservatory was added to the east, and a communication formed with the other
buildings, as the quoin still visible at a, and a window and door at h h, now
stopped up, prove; a loop-hole at c, and old quoins at dcldd, shew that the
west wall was originally an exterior one. Various details are shewn, referred
by letter to the plan.

In both plans the dark tint shews the ancient portions, the lighter tint the
alterations and additions, and the light tint witliin dotted lines shews the
situation of the original walls, which were taken down. The principal alteration
from the original design was effected about the latter part of the reign of
Elizabetli, or the beginning of that of James I., by removing the ancient Guest
Chamher, marked a a a ci, and substituting a larger and wider room, richly
fitted up as a Witlidrawing-Room, which is shewn in Plate XVII.; but the old
roof, given in Plate XVI., was retained, and for the support of the wall-plate, a
pier was left opposite the fireplace, thereby occasioning a curious angular
projection inside the room, ornamented by niches, which seem to have served as
seats. There are two immense windows at opposite corners of this room, one
looking over the court into the plaisaunce, the other into the garden; which
latter is approached by a door on the landing of the stairs, from the hall. The
details are referred by letter.

* Aubrey calls this “ The clining-room, which is a very nohle onebut the great distance of the kitchen from this
room, induces the author to think that it was originally intended as a drawing-room.

-)■ This Aubrey calls the Parlour; but in other buildings of the same kind the parlour is invariably on the right, as
shewn on the plate, near the kitchen, &c.