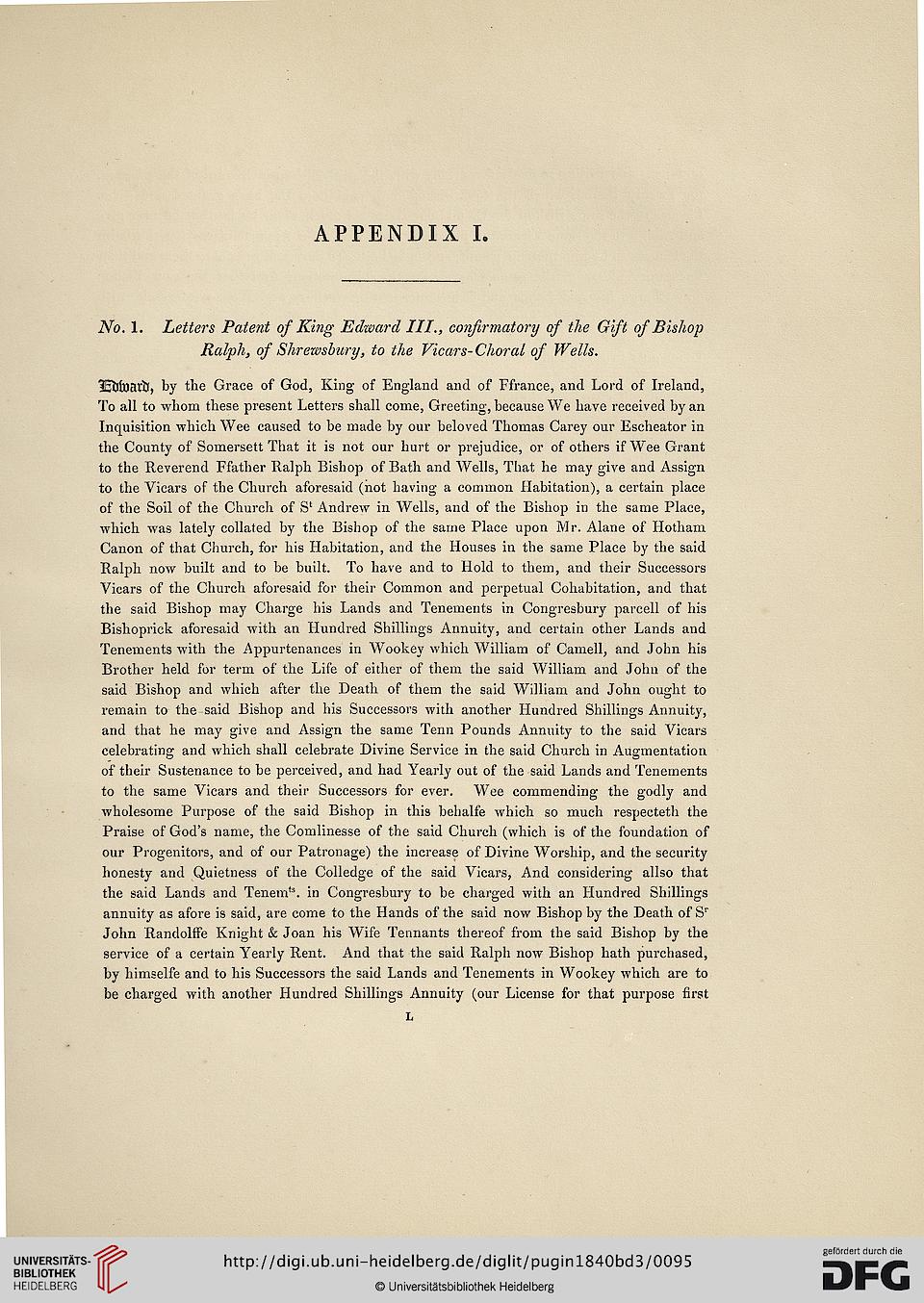 No. 1. Letters Patent of King Edward III., conjirmatory of the Gift of Bishop
Ralph, of Shrewsbury, to the Vicars- Choral of Wells.

lEtlfoartl, by the Grace of God, King of England and of Ffrance, and Lord of Ireland,
To all to whom these present Letters shall come, Greeting, because We have received by an
Inquisition which Wee caused to be made by our beloved Thomas Carey our Escheator in
the County of Somersett That it is not our hurt or prejudice, or of others ifWee Grant
to the Reverend Ffatlier Italph Bishop of Bath and Wells, That he may give and Assign
to the Yicars of the Church aforesaid (not having a common Habitation), a certain place
of the Soil of the Church of S 1 Andrew in Wells, and of the Bisliop in the same Place,
which was lately collated by the Bishop of the same Place upon Mr. Alane of Hotham
Canon of that Church, for his Habitation, and the Houses in the same Place by the said
Ralph now built and to be built. To have and to Hold to them, and their Successors
Vicars of the Church aforesaid for their Common and perpetual Cohabitation, and that
the said Bishop may Charge his Lands and Tenements in Congresbury parcell of his
Bishoprick aforesaid with an Hundred Shillings Annuity, and certain other Lands and
Tenements with the Appurtenances in Wookey which William of Camell, and John his
Brother held for term of the Life of either of them the said William and John of the
said Bishop and which after the Death of tliem the said William and John ought to
remain to the said Bishop and his Successors with another Hundred Shillings Annuity,
and that he may give and Assign the same Tenn Pounds Annuity to the said Vicars
celebrating and which shall celebrate Divine Service in the said Church in Augmentation
of their Sustenance to be perceived, and had Yearly out of the said Lands and Tenernents
to the same Vicars and their Successors for ever. Wee commending the godly and
wholesome Purpose of the said Bishop in this bebalfe which so much respecteth the
Praise of God’s name, the Comlinesse of the said Church (which is of the foundation of
our Progenitors, and of our Patronage) the increase of Divine Worship, and the security
honesty and Quietness of the Colledge of the said Vicars, And considering allso that
the said Lands and Tenem ts. in Congresbury to be charged with an Hundred Shillings
annuity as afore is said, are come to the Hands of the said now Bishop by the Death of S r
John RandolfFe Knight & Joan his Wife Tennants thereof from the said Bishop by the
service of a certain Yearly Rent. And that the said Ralph now Bishop hath purchased,
by himselfe and to his Successors the said Lands and Tenements in Wookey which are to
be charged with another Hundred Shillings Annuity (our License for that purpose first