Ruskin, John
Examples of the architecture of Venice, selected and drawn to measurement from the edifices — London, 1851 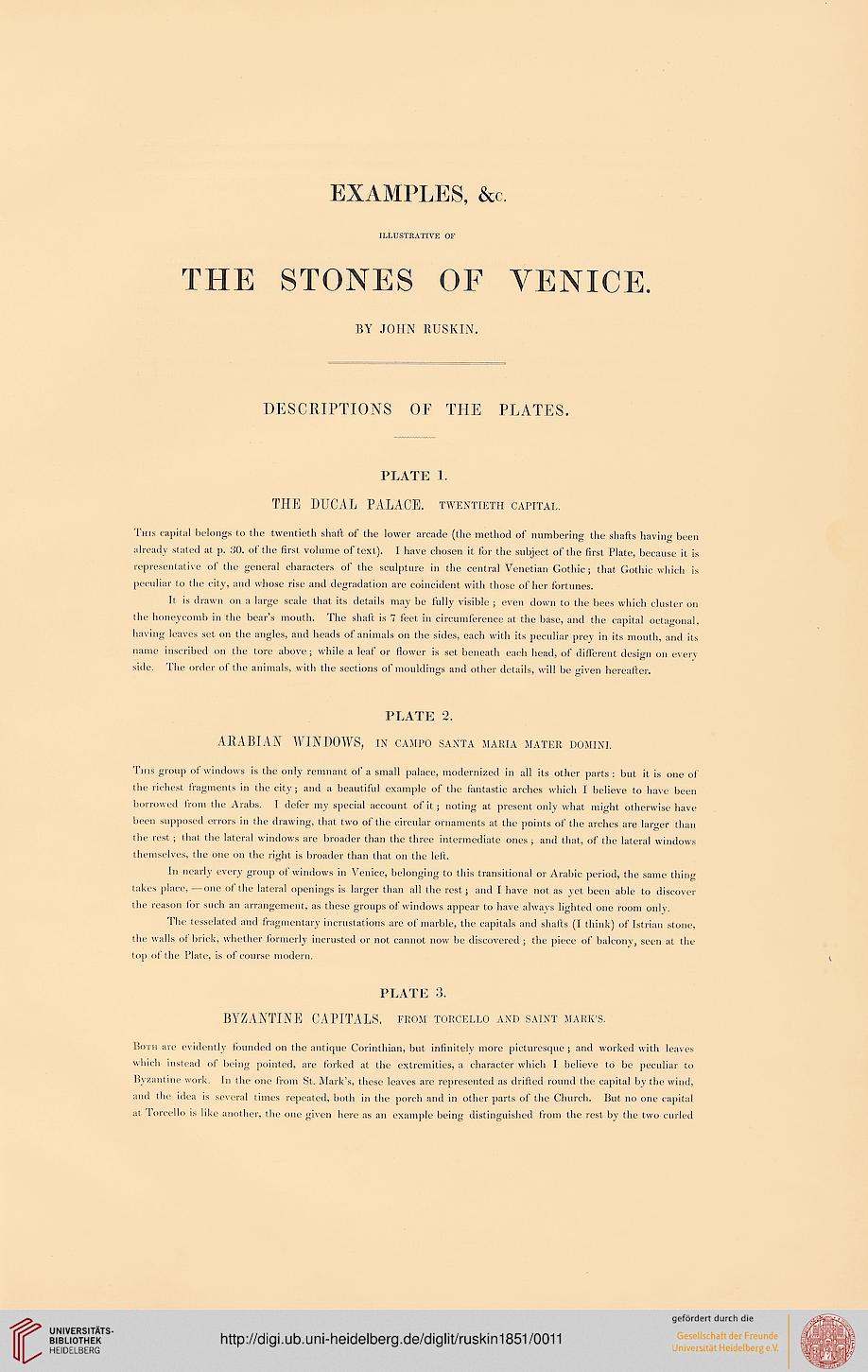 THE STONES OF VENICE.

DESCRIPTIONS OF THE PLATES.

This capital belongs to the twentieth shaft of the lower arcade (the method of numbering the shafts having been
already stated at p. 30. of the first volume of text). I have chosen it for the subject of the first Plate, because it is
representative of the general characters of the sculpture in the central Venetian Gothic; that Gothic which is
peculiar to the city, and whose rise and degradation are coincident with those of her fortunes.

It is drawn on a large scale that its details may be fully visible ; even down to the bees which cluster on
the honeycomb in the bear's mouth. The shaft is 1 feet in circumference at the base, and the capital octagonal,
having leaves set on the angles, and heads of animals on the sides, each with its peculiar prey in its mouth, and its
name inscribed on the tore above; while a leaf or flower is set beneath each head, of different design on every
side. The order of the animals, with the sections of mouldings and other details, will be given hereafter.

This group of windows is the only remnant of a small palace, modernized in all its other parts : but it is one of
the richest fragments in the city; and a beautiful example of the fantastic arches which I believe to have been
borrowed from the Arabs. I defer my special account of it; noting at present only what might otherwise have
been supposed errors in the drawing, that two of the circular ornaments at the points of the arches are larger than
the rest; that the lateral windows are broader than the three intermediate ones ; and that, of the lateral windows
themselves, the one on the right is broader than that on the left.

In nearly every group of windows in Venice, belonging to this transitional or Arabic period, the same thing
takes place, —one of the lateral openings is larger than all the rest; and I have not as yet been able to discover
the reason for such an arrangement, as these groups of windows appear to have always lighted one room only.

The tesselated and fragmentary incrustations are of marble, the capitals and shafts (I think) of Istrian stone,
the walls of brick, whether formerly incrusted or not cannot now be discovered ; the piece of balcony, seen at the
top of the Plate, is of course modern.

Both are evidently founded on the antique Corinthian, but infinitely more picturesque ; and worked with leaves
which instead of being pointed, are forked at the extremities, a character which I believe to be peculiar to
Byzantine work. In the one from St. Mark's, these leaves are represented as drifted round the capital by the wind,
and the idea is several times repeated, both in the porch and in other parts of the Church. But no one capital
at Torcello is like another, the one given here as an example being distinguished from the rest by the two curled