Published in 1874 by F.A. Brockhaus in Leipzig these publications report on the first three years of excavations at Hisarlik/Troy (1871-1873). Their value lies in the fact that we meet the author at the beginning of his scientific work at a time when he was not supported and influenced by personalities like Rudolf Virchow or Wilhelm Dörpfeld.
The excavation report, published on January, 31, 1874 under the title „Trojanische Alterthümer, Bericht über die Ausgrabungen in Troja von Dr. Heinrich Schliemann“ (Troy and its remains) and printed in 1000 copies only was financed by Schliemann himself and published simualtaneously in French. At the same time the accompanying plates: " Atlas trojanischer Alterthümer ". Photographische Abbildungen zu dem Berichte über die Ausgrabungen in Troja“ were published and printed in 400-500 copies only. Both publications were sold separately, the "Atlas" ran out of print already one and a half month later.
The „Atlas“ contains 217 large-format plates and 57 printed pages with additional descpriptions and annotations. Approximately 4.000 out of approximately 100.000 Troy findings are published in the "Atlas".The „Bericht über die Ausgrabungen in Troja“ is an authentic document. It contains 23 periodical notes, which Schliemann himself called "Aufsätze“ (articles). These are progress reports written on a weekly or two-weekly basis or sometimes at longer intervals. They rely most certainly on his daily excavation diaries which today are kept in the Gennadius Library (Athens).
A comprehensive introduction, written at the end of 1873, summarizes the results of three years of excavations at Troy. The first excavation cycle was crowned with success by finding „Priam's Treasure“. Schliemann believed this goal to be reached, wanted to stop the excavations at Troy and to publish the results as soon as possible. This hurry is obvious from the publications. The text contains inconsistency and repetitions. The photographs in the "Atlas" vary in quality, and many of them are cut or pasted in without care.
The majority of the illustrations in the "Atlas" is reproduced as "photographic drawings". This means: drawings documented as photographs and reproduced as prints. Each "Atlas" volume is a unique example. The photographic plates did not survive. Most photograps and more than 100.000 copies were made by the Athenian photographer Panagos Th. Zaphyropoulos. Records indicate that Schliemann himself removed 25.000 prints because of their bad quality. However the quality of the remaining illustrations is insufficient. To illustrate the English translation of the „Bericht über die Ausgrabungen in Troja“ the photographic patterns of the "Atlas" were used to produce engravings. 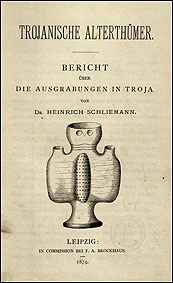