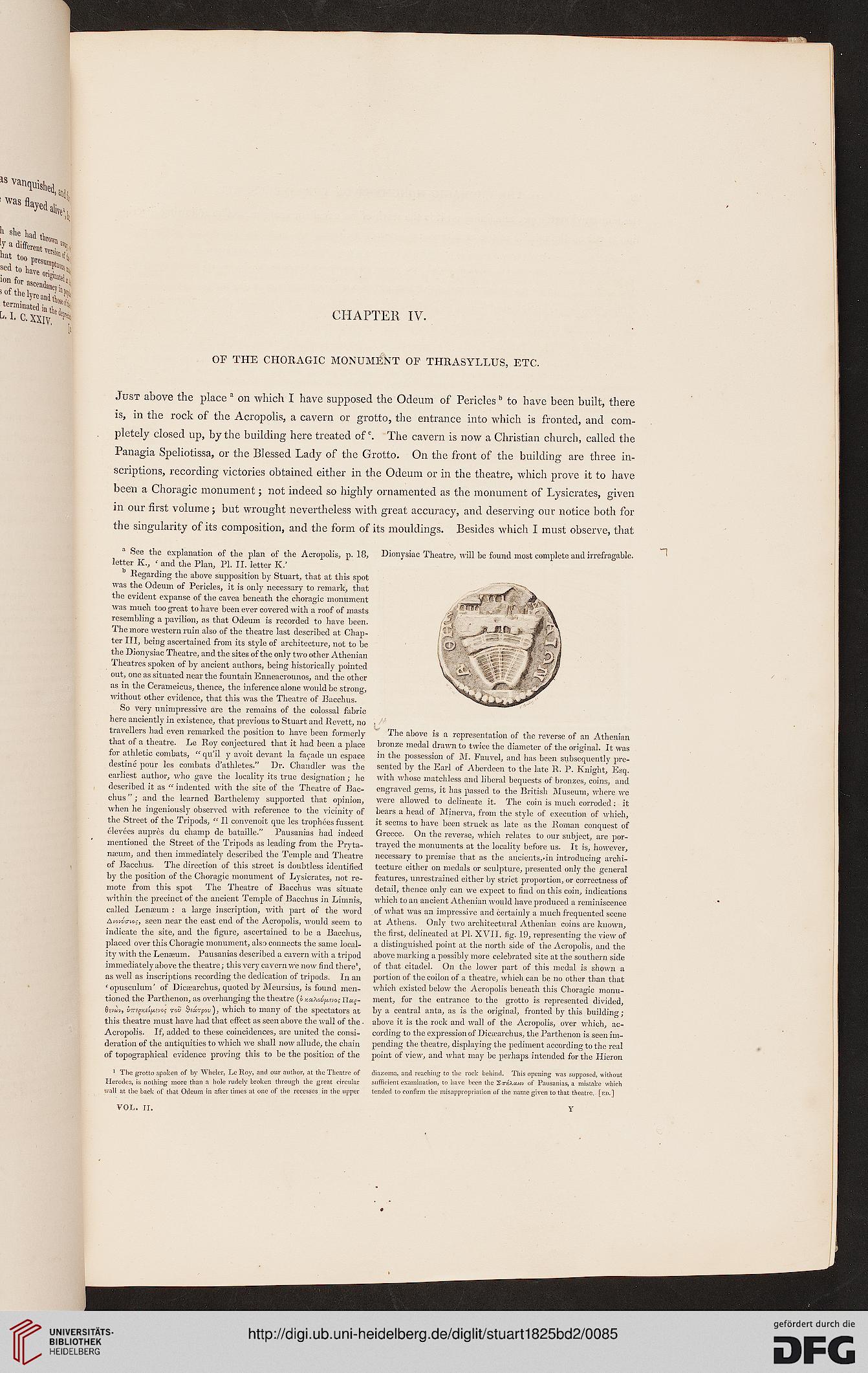 OF THE CHORAGIC MONUMENT OF THRASYLLUS, ETC.

Just above the place a on which I have supposed the Odeum of Pericles " to have been built, there
is, in the rock of the Acropolis, a cavern or grotto, the entrance into which is fronted, and com-
pletely closed up, by the building here treated ofc. The cavern is now a Christian church, called the
Panagia Speliotissa, or the Blessed Lady of the Grotto. On the front of the building are three in-
scriptions, recording victories obtained either in the Odeum or in the theatre, which prove it to have
been a Choragic monument; not indeed so highly ornamented as the monument of Lysicrates, given
in our first volume ; but wrought nevertheless with great accuracy, and deserving our notice both for
the singularity of its composition, and the form of its mouldings. Besides which I must observe, that

Regarding the above supposition by Stuart, that at this spot
was the Odeum of Pericles, it is only necessary to remark, that
the evident expanse of the cavea beneath the choragic monument
was much too great to have been ever covered with a roof of masts
resembling a pavilion, as that Odeum is recorded to have been.
The more western ruin also of the theatre last described at Chap-
ter III, being ascertained from its style of architecture, not to be
the Dionysiac Theatre, and the sites of the only two other Athenian
Theatres spoken of by ancient authors, being historically pointed
out, one as situated near the fountain Enneacrounos, and the other
as in the Cerameicus, thence, the inference alone would be strong,
without other evidence, that this was the Theatre of Bacchus.

So very unimpressive are the remains of the colossal fabric
here anciently in existence, that previous to Stuart and Revett, no
travellers had even remarked the position to have been formerly
that of a theatre. Le Roy conjectured that it had been a place
for athletic combats, " qu'il y avoit devant la facade un espace
destine pour les combats d'athletes." Dr. Chandler was the
earliest author, who gave the locality its true designation; he
described it as " indented with the site of the Theatre of Bac-
chus "; and the learned Barthelemy supported that opinion,
when he ingeniously observed with reference to the vieinitv of
the Street of the Tripods, " II convenoit que les trophees fussent
elevees aupres du champ de bataille." Pausanias had indeed
mentioned the Street of the Tripods as leading from the Pryta-
ntcum, and then immediately described the Temple and Theatre
of Bacchus. The direction of this street is doubtless identified
by the position of the Choragic monument of Bysicrates, not re-
mote from this spot The Theatre of Bacchus was situate
within the precinct of the ancient Temple of Bacchus in Limnis,
called Lenamm : a large inscription, with part of the word
Aioiwiof, seen near the east end of the Acropolis, would seem to
indicate the site, and the figure, ascertained to be a Bacchus,
placed over this Choragic monument, also connects the same local-
ity with the Benajum. Pausanias described a cavern with a tripod
immediately above the theatre; this very cavern we now find there1,
as well as inscriptions recording the dedication of tripods. In an
'opusculum' of Diccearchus, quoted by Meursius, is found men-
tioned the Parthenon, as overhanging the theatre (5 natoi/wos n«£-
6cvm, iirmuiiuvos rov Siccrpov), which to many of the spectators at
this theatre must have had that effect as seen above the wall of the.
Acropolis. If, added to these coincidences, are united the consi-
deration of the antiquities to which we shall now allude, the chain
of topographical evidence proving this to be the position of the

1 The grotto spoken of by Wheler, Le Roy, and our author, at the Theatre of
Herodes, is nothing more than a hole rudely broken through the great circular
wall at the back of that Odeum in after times at one of the recesses in the upper

Dionysiac Theatre, will be found most complete and irrefragable.

The above is a representation of the reverse of an Athenian
bronze medal drawn to twice the diameter of the original. It was
in the possession of M. Pauvel, and has been subsequently pre-
sented by the Earl of Aberdeen to the late R. P. Knight, Esq.
with whose matchless and liberal bequests of bronzes, coins, and
engraved gems, it has passed to the British Museum, where we
were allowed to delineate it. The coin is much corroded: it
bears a head of Minerva, from the style of execution of which,
it seems to have been struck as late as the Roman conquest of
Greece. On the reverse, which relates to our subject, are por-
trayed the monuments at the locality before us. It is, however,
necessary to premise that as the ancients,-in introducing archi-
tecture either on medals or sculpture, presented only the gezieral
features, unrestrained either by strict proportion, or correctness of
detail, thence only can we expect to find on this coin, indications
which to an ancient Athenian would have produced a reminiscence
of what was an impressive and certainly a much frequented scene
at Athens. Only two architectural Athenian coins are known,
the first, delineated at PI. XVII. fig. 19, representing the view of
a distinguished point at the north side of the Acropolis, and the
above marking a possibly more celebrated site at the southern side
of that citadel. On the lower part of this medal is shown a
portion of the coilon of a theatre, which can be no other than that
which existed below the Acropolis beneath this Choragic monu-
ment, for the entrance to the grotto is represented divided,
by a central anta, as is the original, fronted by this building ;
above it is the rock and wall of the Acropolis, over which, ac-
cording to the expression of Dica'archus, the Parthenon is seen im-
pending the theatre, displaying the pediment according to the real
point of view, and what may be perhaps intended for the Hieron

diazoma, and reaching to the rock behind. This opening was supposed, without
sufficient examination, to have been the 'S.jrnt.aiov of Pausanias, a mistake which
tended to confirm the misappropriation of the name given to that theatre, [ed.]