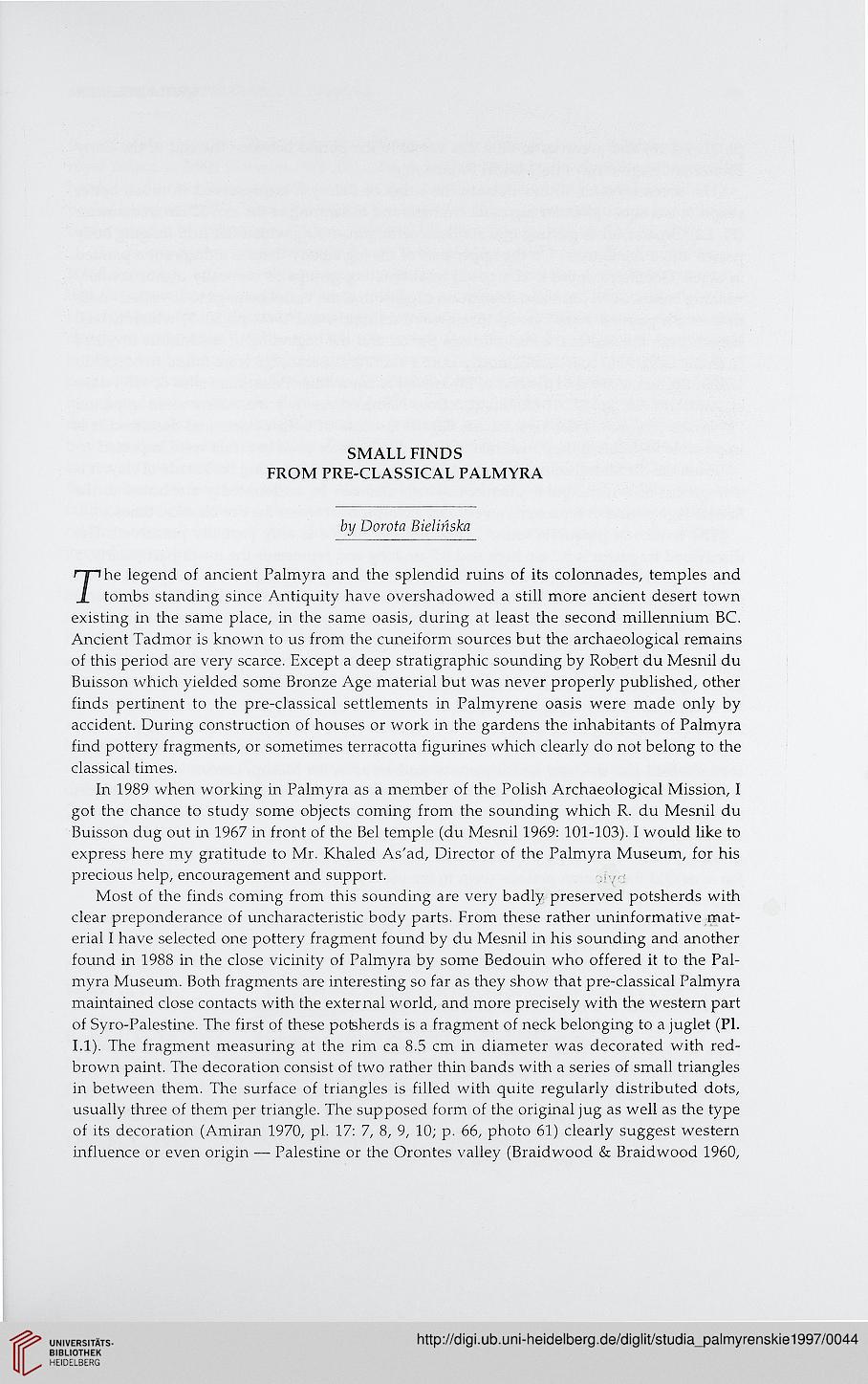 he legend of ancient Palmyra and the splendid ruins of its colonnades, temples and

tombs standing since Antiquity have overshadowed a still more ancient desert town
existing in the same place, in the same oasis, during at least the second millennium BC.
Ancient Tadmor is known to us from the cuneiform sources but the archaeological remains
of this period are very scarce. Except a deep stratigraphic sounding by Robert du Mesnil du
Buisson which yielded some Bronze Age material but was never properly published, other
finds pertinent to the pre-classical settlements in Palmyrene oasis were made only by
accident. During construction of houses or work in the gardens the inhabitants of Palmyra
find pottery fragments, or sometimes terracotta figurines which clearly do not belong to the
classical times.

In 1989 when working in Palmyra as a member of the Polish Archaeological Mission, I
got the chance to study some objects coming from the sounding which R. du Mesnil du
Buisson dug out in 1967 in front of the Bel temple (du Mesnil 1969: 101-103). I would like to
express here my gratitude to Mr. Khaled As'ad, Director of the Palmyra Museum, for his
precious help, encouragement and support.

Most of the finds coming from this sounding are very badly preserved potsherds with
clear preponderance of uncharacteristic body parts. From these rather uninformative mat-
erial I have selected one pottery fragment found by du Mesnil in his sounding and another
found in 1988 in the close vicinity of Palmyra by some Bedouin who offered it to the Pal-
myra Museum. Both fragments are interesting so far as they show that pre-classical Palmyra
maintained close contacts with the external world, and more precisely with the western part
of Syro-Palestine. The first of these potsherds is a fragment of neck belonging to a juglet (PL
1.1). The fragment measuring at the rim ca 8.5 cm in diameter was decorated with red-
brown paint. The decoration consist of two rather thin bands with a series of small triangles
in between them. The surface of triangles is filled with quite regularly distributed dots,
usually three of them per triangle. The supposed form of the original jug as well as the type
of its decoration (Amiran 1970, pi. 17: 7, 8, 9, 10; p. 66, photo 61) clearly suggest western
influence or even origin — Palestine or the Orontes valley (Braidwood & Braidwood 1960,