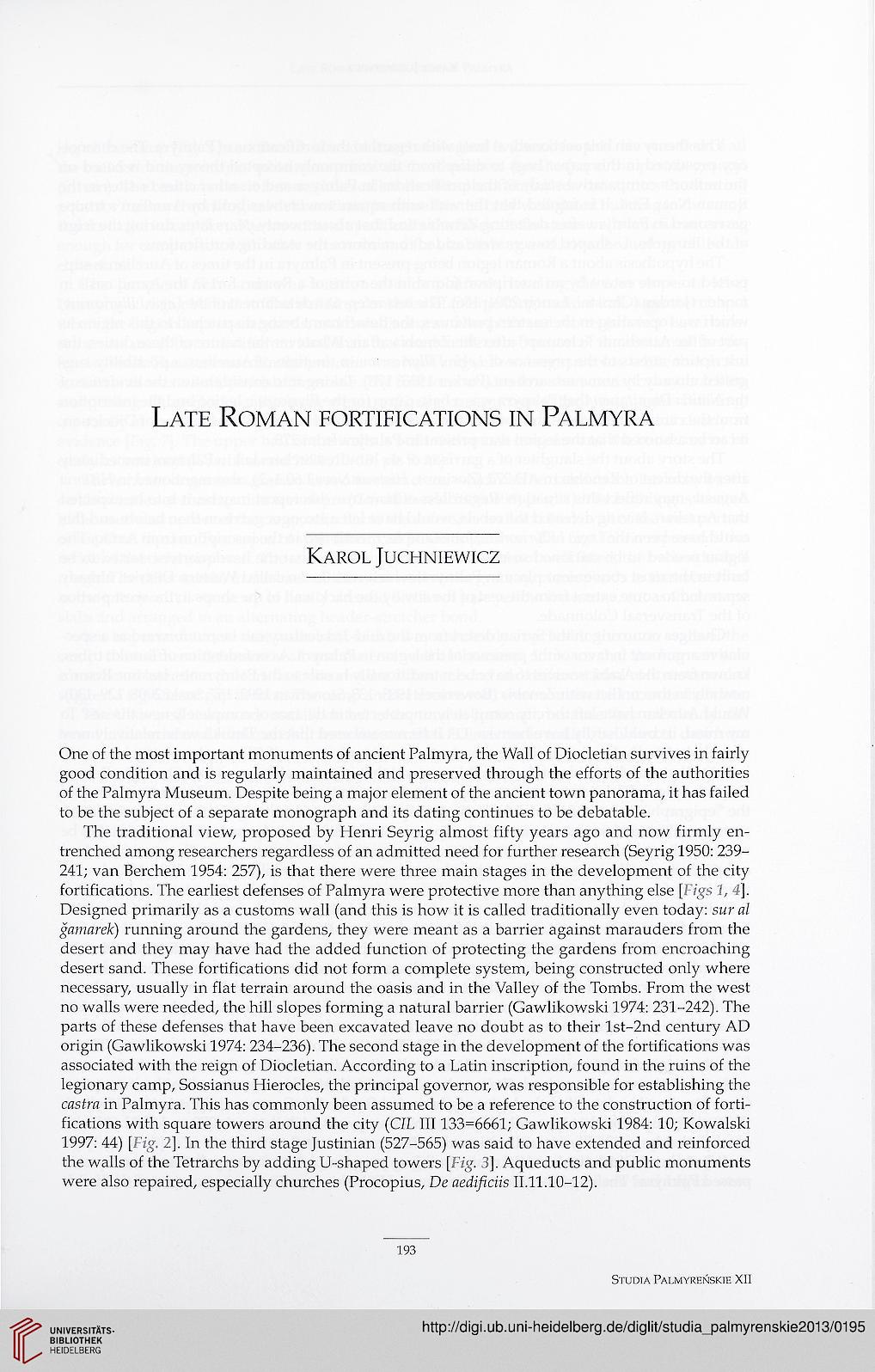 One of the most important monuments of ancient Palmyra, the Wall of Diocletian survives in fairly
good condition and is regularly maintained and preseryed through the efforts of the authorities
of the Palmyra Museum. Despite being a major element of the ancient town panorama, it has failed
to be the subject of a separate monograph and its dating continues to be debatable.

The traditional view, proposed by Henri Seyrig almost fifty years ago and now firmly en-
trenched among researchers regardless of an admitted need for further research (Seyrig 1950: 239-
241; van Berchem 1954: 257), is that there were three main stages in the development of the city
fortifications. The earliest defenses of Palmyra were protective morę than anything else [Figs 1, 4],
Designed primarily as a customs wali (and this is how it is called traditionally even today: sur al
gamarek) running around the gardens, they were meant as a barrier against marauders from the
desert and they may have had the added function of protecting the gardens from encroaching
desert sand. These fortifications did not form a complete system, being constructed only where
necessary, usually in fiat terrain around the oasis and in the Valley of the Tombs. From the west
no walls were needed, the hill slopes forming a natural barrier (Gawlikowski 1974: 231-242). The
parts of these defenses that have been excavated leave no doubt as to their lst-2nd century AD
origin (Gawlikowski 1974: 234-236). The second stage in the development of the fortifications was
associated with the reign of Diocletian. According to a Latin inscription, found in the ruins of the
legionary camp, Sossianus Hierocles, the principal governor, was responsible for establishing the
castra in Palmyra. This has commonly been assumed to be a reference to the construction of forti-
fications with square towers around the city (CIL III 133=6661; Gawlikowski 1984: 10; Kowalski
1997: 44) [Fig, 2\. In the third stage Justinian (527-565) was said to have extended and reinforced
the walls of the Tetrarchs by adding U-shaped towers [Fig, 3]. Aqueducts and public monuments
were also repaired, especially churches (Procopius, De aedificiis 11.11.10-12).