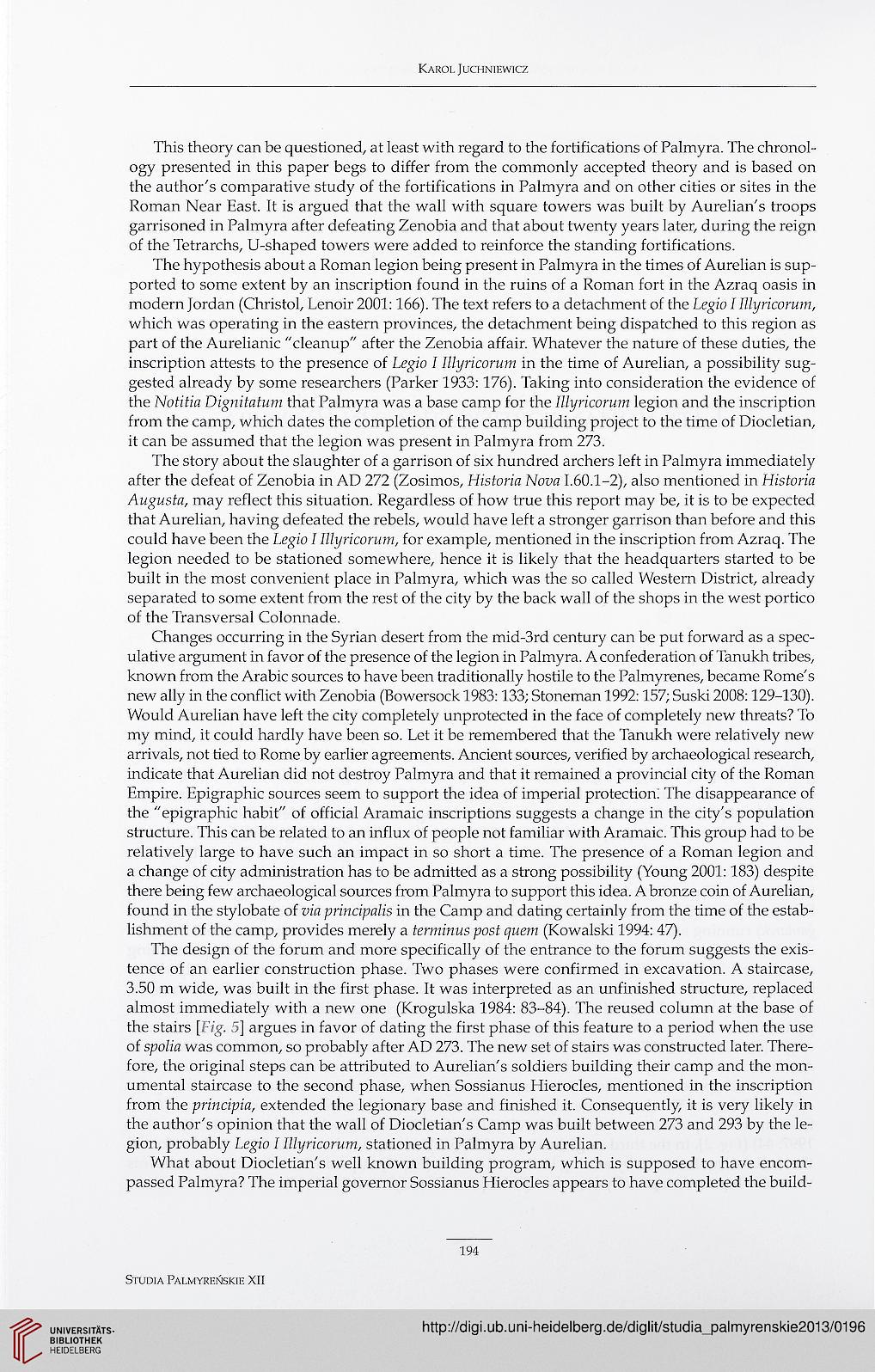 This theory can be questioned, at łeast with regard to the fortifications of Palmyra. The chronol-
ogy presented in this paper begs to differ from the commonly accepted theory and is based on
the author's comparative study of the fortifications in Palmyra and on other cities or sites in the
Roman Near East. It is argued that the wali with sąuare towers was built by Aurelian's troops
garrisoned in Palmyra after defeating Zenobia and that about twenty years later, during the reign
of the Tetrarchs, U-shaped towers were added to reinforce the standing fortifications.

The hypothesis about a Roman legion being present in Palmyra in the times of Aurelian is sup-
ported to some extent by an inscription found in the ruins of a Roman fort in the Azraq oasis in
modern Jordan (Christol, Lenoir 2001:166). The text refers to a detachment of the Legio I Illyńcorum,
which was operating in the eastern provinces, the detachment being dispatched to this region as
part of the Aurelianic "cleanup" after the Zenobia affair. Whatever the naturę of these duties, the
inscription attests to the presence of Legio I Illyńcorum in the time of Aurelian, a possibility sug-
gested already by some researchers (Parker 1933:176). Taking into consideration the evidence of
the Notitia Dignitatum that Palmyra was a base camp for the Illyńcorum legion and the inscription
from the camp, which dates the completion of the camp building project to the time of Diocletian,
it can be assumed that the legion was present in Palmyra from 273.

The story about the slaughter of a garrison of six hundred archers left in Palmyra immediately
after the defeat of Zenobia in AD 272 (Zosimos, Historia Nova 1.60.1-2), also mentioned in Historia
Augusta, may reflect this situation. Regardless of how true this report may be, it is to be expected
that Aurelian, having defeated the rebels, would have left a stronger garrison than before and this
could have been the Legio I Illyńcorum, for example, mentioned in the inscription from Azraq. The
legion needed to be stationed somewhere, hence it is likely that the headquarters started to be
built in the most convenient place in Palmyra, which was the so called Western District, already
separated to some extent from the rest of the city by the back wali of the shops in the west portico
of the Transversal Colonnade.

Changes occurring in the Syrian desert from the mid~3rd century can be put forward as a spec-
ulative argument in favor of the presence of the legion in Palmyra. A confederation of Tanukh tribes,
known from the Arabie sources to have been traditionally hostile to the Palmyrenes, became Romek
new ally in the conflict with Zenobia (Bowersock 1983:133; Stoneman 1992:157; Suski 2008:129-130).
Would Aurelian have left the city completely unprotected in the face of completely new threats? To
my mind, it could hardly have been so. Let it be remembered that the Tanukh were relatively new
arrivals, not tied to Romę by earlier agreements. Ancient sources, verified by archaeological research,
indicate that Aurelian did not destroy Palmyra and that it remained a provincial city of the Roman
Empire. Epigraphic sources seem to support the idea of imperial protection. The disappearance of
the "epigraphic habit" of official Aramaic inscriptions suggests a change in the city's population
structure. This can be related to an influx of people not familiar with Aramaic. This group had to be
relatively large to have such an impact in so short a time. The presence of a Roman legion and
a change of city administration has to be admitted as a strong possibility (Young 2001:183) despite
there being few archaeological sources from Palmyra to support this idea. Abronze coin of Aurelian,
found in the stylobate of via principalis in the Camp and dating certainly from the time of the estab-
lishment of the camp, provides merely a terminus post cjuem (Kowalski 1994: 47).

The design of the forum and morę specifically of the entrance to the forum suggests the exis~
tence of an earlier construction phase. Two phases were confirmed in excavation. A staircase,
3.50 m wide, was built in the first phase. It was interpreted as an unfinished structure, replaced
almost immediately with a new one (Krogulska 1984: 83-84). The reused column at the base of
the stairs [Fig, 5] argues in favor of dating the first phase of this feature to a period when the use
of spolia was common, so probably after AD 273. The new set of stairs was constructed later. There-
fore, the original steps can be attributed to Aurelian's soldiers building their camp and the mon-
umental staircase to the second phase, when Sossianus Hierocles, mentioned in the inscription
from the principia, extended the legionary base and finished it. Consequently, it is very likely in
the author's opinion that the wali of Diocletian's Camp was built between 273 and 293 by the le-
gion, probably Legio I Illyńcorum, stationed in Palmyra by Aurelian.

What about Diocletian's well known building program, which is supposed to have encom-
passed Palmyra? The imperial governor Sossianus Hierocles appears to have completed the build-