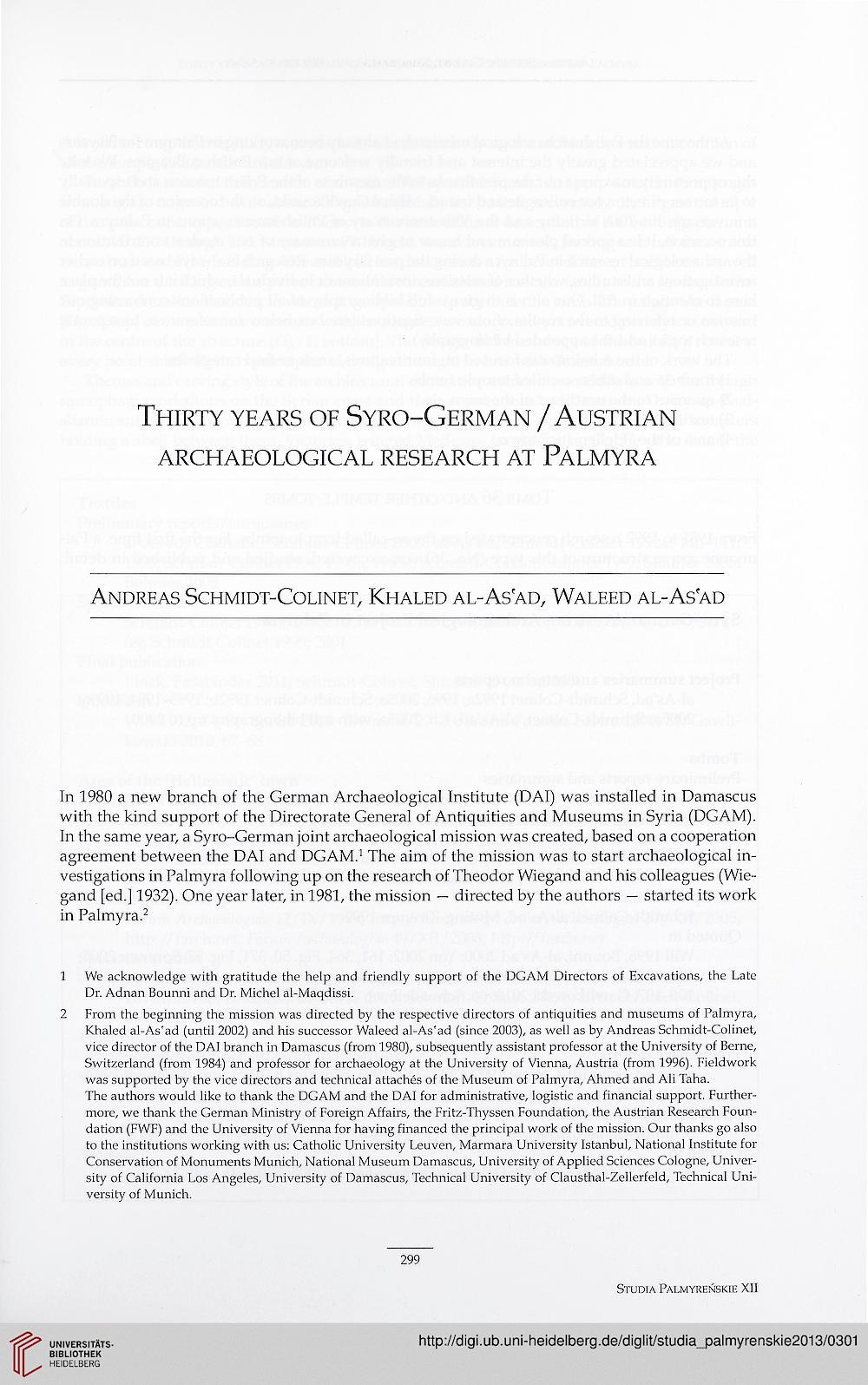 In 1980 a new branch of the German Archaeological Institute (DAI) was installed in Damascus
with the kind support of the Directorate General of Antiquities and Museums in Syria (DGAM).
In the same year, a Syro-German joint archaeological mission was created, based on a cooperation
agreement between the DAI and DGAM.1 The aim of the mission was to start archaeological in-
vestigations in Palmyra following up on the research of Theodor Wiegand and his colleagues (Wie-
gand [ed.] 1932). One year later, in 1981, the mission — directed by the authors — started its work
in Palmyra.2

1 We acknowledge with gratitude the help and friendly support of the DGAM Directors of Excavations, the Late
Dr. Adnan Bounni and Dr. Michel al-Maqdissi.

2 From the beginning the mission was directed by the respective directors of antiąuities and museums of Palmyra,
Khaled al-As'ad (until 2002) and his successor Waleed al-As'ad (sińce 2003), as well as by Andreas Schmidt-Colinet,
vice director of the DAI branch in Damascus (from 1980), subseąuently assistant professor at the University of Berne,
Switzerland (from 1984) and professor for archaeology at the University of Vienna, Austria (from 1996). Fieldwork
was supported by the vice directors and technical attaches of the Museum of Palmyra, Ahmed and Ali Taha.

The authors would like to thank the DGAM and the DAI for administrative, logistic and financial support. Further-
more, we thank the German Ministry of Foreign Affairs, the Fritz-Thyssen Foundation, the Austrian Research Foun-
dation (FWF) and the University of Vienna for having financed the principal work of the mission. Our thanks go also
to the institutions working with us: Catholic University Leuven, Marmara University Istanbul, National Institute for
Conservation of Monuments Munich, National Museum Damascus, University of Applied Sciences Cologne, Univer-
sity of California Los Angeles, University of Damascus, Technical University of Clausthal-Zellerfeld, Technical Uni-
versity of Munich.