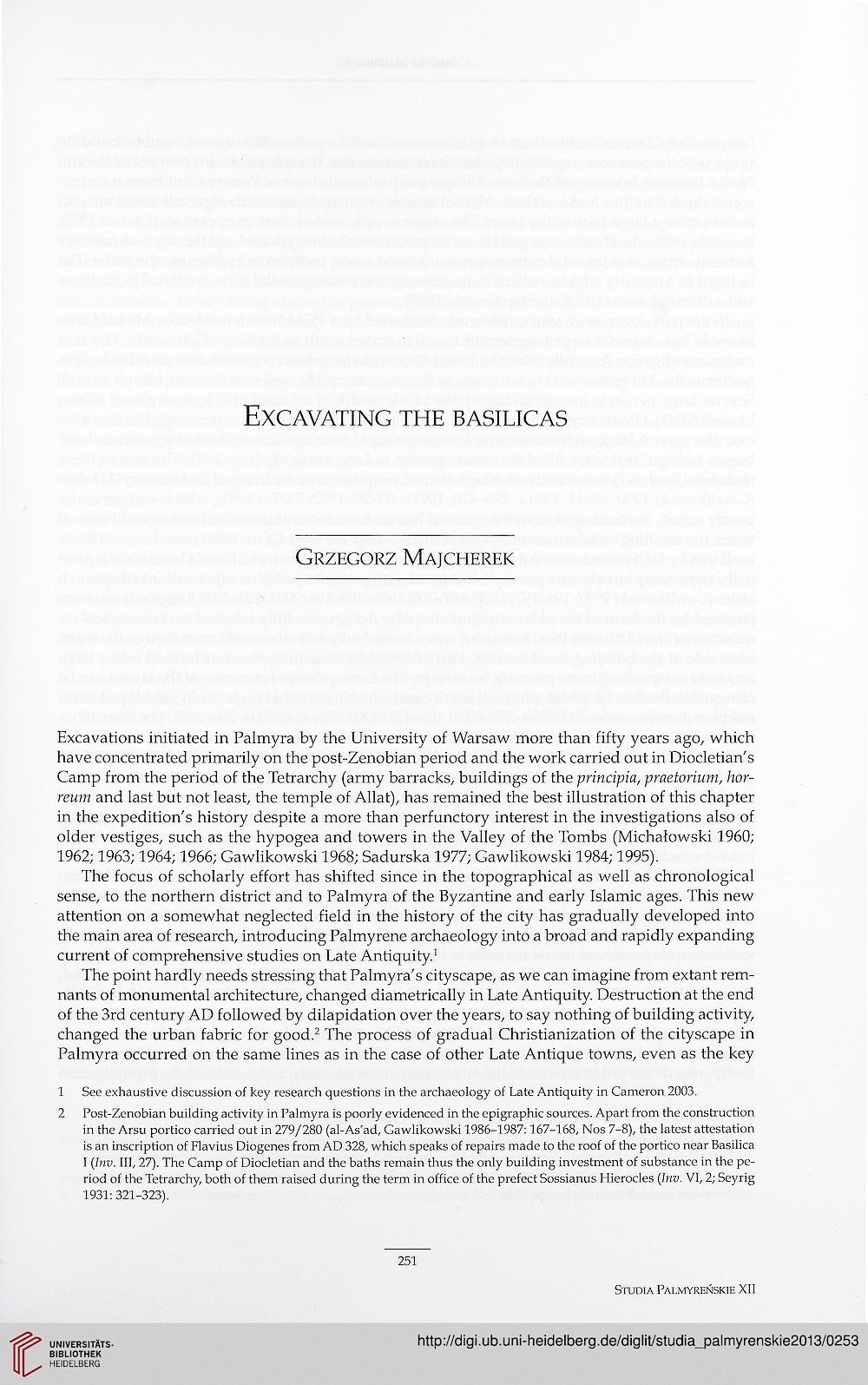 Excavations initiated in Palmyra by the University of Warsaw morę than fifty years ago, which
have concentrated primarily on the post-Zenobian period and the work carried out in Diocletian's
Camp from the period of the Tetrarchy (army barracks, buildings of the principia, praetońum, hor-
reum and last but not least, the tempie of Allat), has remained the best illustration of this chapter
in the expedition's history despite a morę than perfunctory interest in the investigations also of
older yestiges, such as the hypogea and towers in the Valley of the Tombs (Michałowski 1960;
1962; 1963; 1964; 1966; Gawlikowski 1968; Sadurska 1977; Gawlikowski 1984; 1995).

The focus of scholarly effort has shifted sińce in the topographical as well as chronological
sense, to the northern district and to Palmyra of the Byzantine and early Islamie ages. This new
attention on a somewhat neglected field in the history of the city has gradually developed into
the main area of research, introducing Palmyrene archaeology into a broad and rapidly expanding
current of comprehensive studies on Late Antiąuity.1

The point hardly needs stressing that Palmyra's cityscape, as we can imagine from extant rem-
nants of monumental architecture, changed diametrically in Late Antiąuity. Destruction at the end
of the 3rd century AD followed by dilapidation over the years, to say nothing of building activity,
changed the urban fabric for good.2 The process of gradual Christianization of the cityscape in
Palmyra occurred on the same lines as in the case of other Late Antiąue towns, even as the key

1 See exhaustive discussion of key research ąuestions in the archaeology of Late Antiąuity in Cameron 2003.

2 Post-Zenobian building activity in Palmyra is poorly evidenced in the epigraphic sources. Apart from the construction
in the Arsu portico carried out in 279/280 (al-As'ad, Gawlikowski 1986-1987:167-168, Nos 7-8), the latest attestation
is an inscription of Flavius Diogenes from AD 328, which speaks of repairs madę to the roof of the portico near Basilica
I (Inv. III, 27). The Camp of Diocletian and the baths remain thus the only building investment of substance in the pe-
riod of the Tetrarchy, both of them raised during the term in office of the prefect Sossianus Hierocles [Inv. VI, 2; Seyrig
1931:321-323).