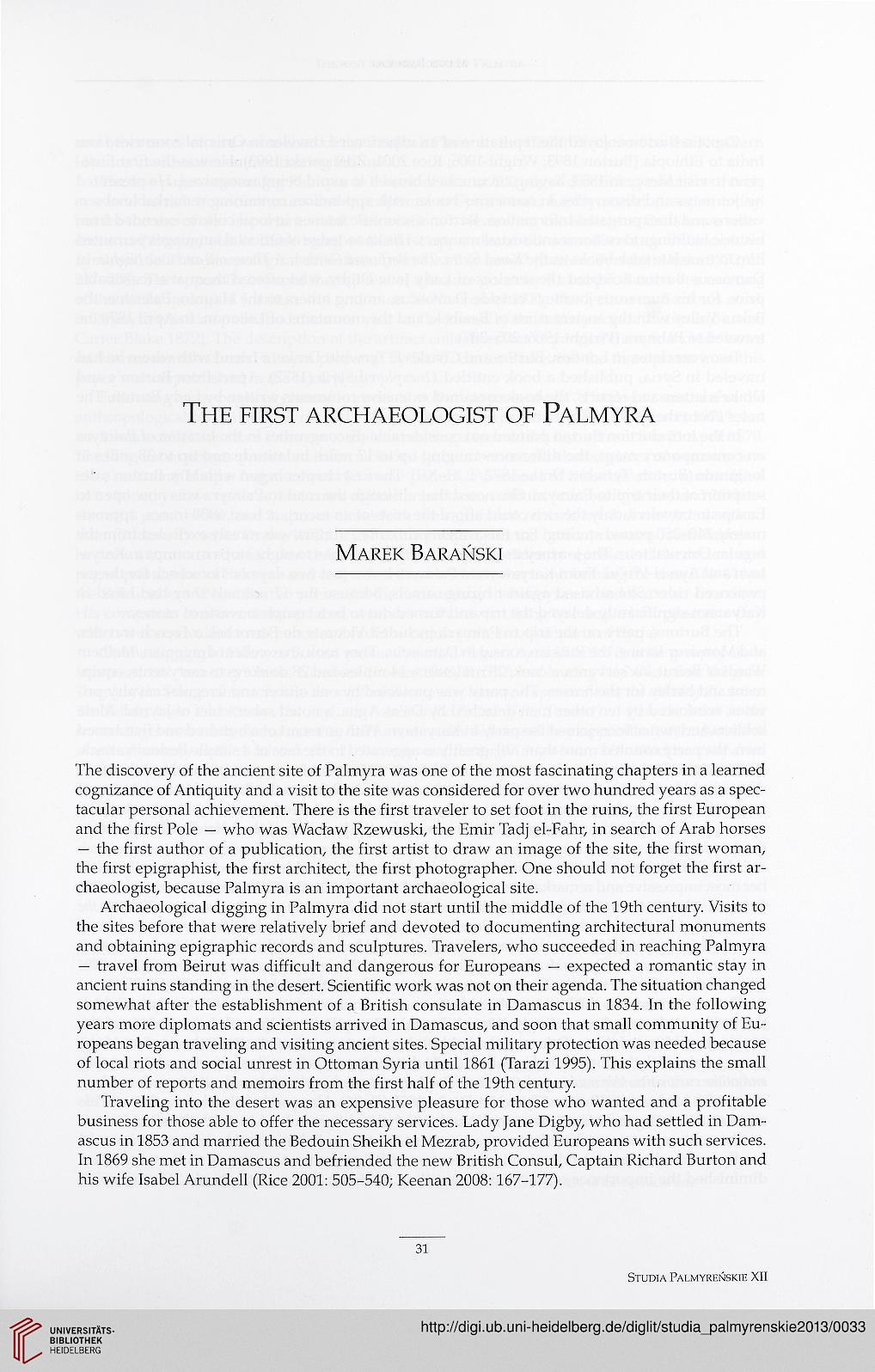 Information about OCR text
THE FIRST ARCHAEOLOGIST OF PALMYRA

The discovery of the ancient site of Palmyra was one of the most fascinating chapters in a learned
cognizance of Antiąuity and a visit to the site was considered for over two hundred years as a spec-
tacular personal achievement. There is the first traveler to set foot in the ruins, the first European
and the first Pole — who was Wacław Rzewuski, the Emir Tadj el-Fahr, in search of Arab horses

— the first author of a publication, the first artist to draw an image of the site, the first woman,
the first epigraphist, the first architect, the first photographer. One should not forget the first ar-
chaeologist, because Palmyra is an important archaeological site.

Archaeological digging in Palmyra did not start until the middle of the 19th century. Visits to
the sites before that were relatively brief and devoted to documenting architectural monuments
and obtaining epigraphic records and sculptures. Travelers, who succeeded in reaching Palmyra

— travel from Beirut was difficult and dangerous for Europeans — expected a romantic stay in
ancient ruins standing in the desert. Scientific work was not on their agenda. The situation changed
somewhat after the establishment of a British consulate in Damascus in 1834. In the following
years morę diplomats and scientists arrived in Damascus, and soon that smali community of Eu-
ropeans began traveling and visiting ancient sites. Special military protection was needed because
of local riots and social unrest in Ottoman Syria until 1861 (Tarazi 1995). This explains the smali
number of reports and memoirs from the first half of the 19th century.

Traveling into the desert was an expensive pleasure for those who wanted and a profitable
business for those able to offer the necessary services. Lady Jane Digby, who had settled in Dam-
ascus in 1853 and married the Bedouin Sheikh el Mezrab, provided Europeans with such services.
In 1869 she met in Damascus and befriended the new British Consul, Captain Richard Burton and
his wife Isabel Arundell (Rice 2001: 505-540; Keenan 2008:167-177).