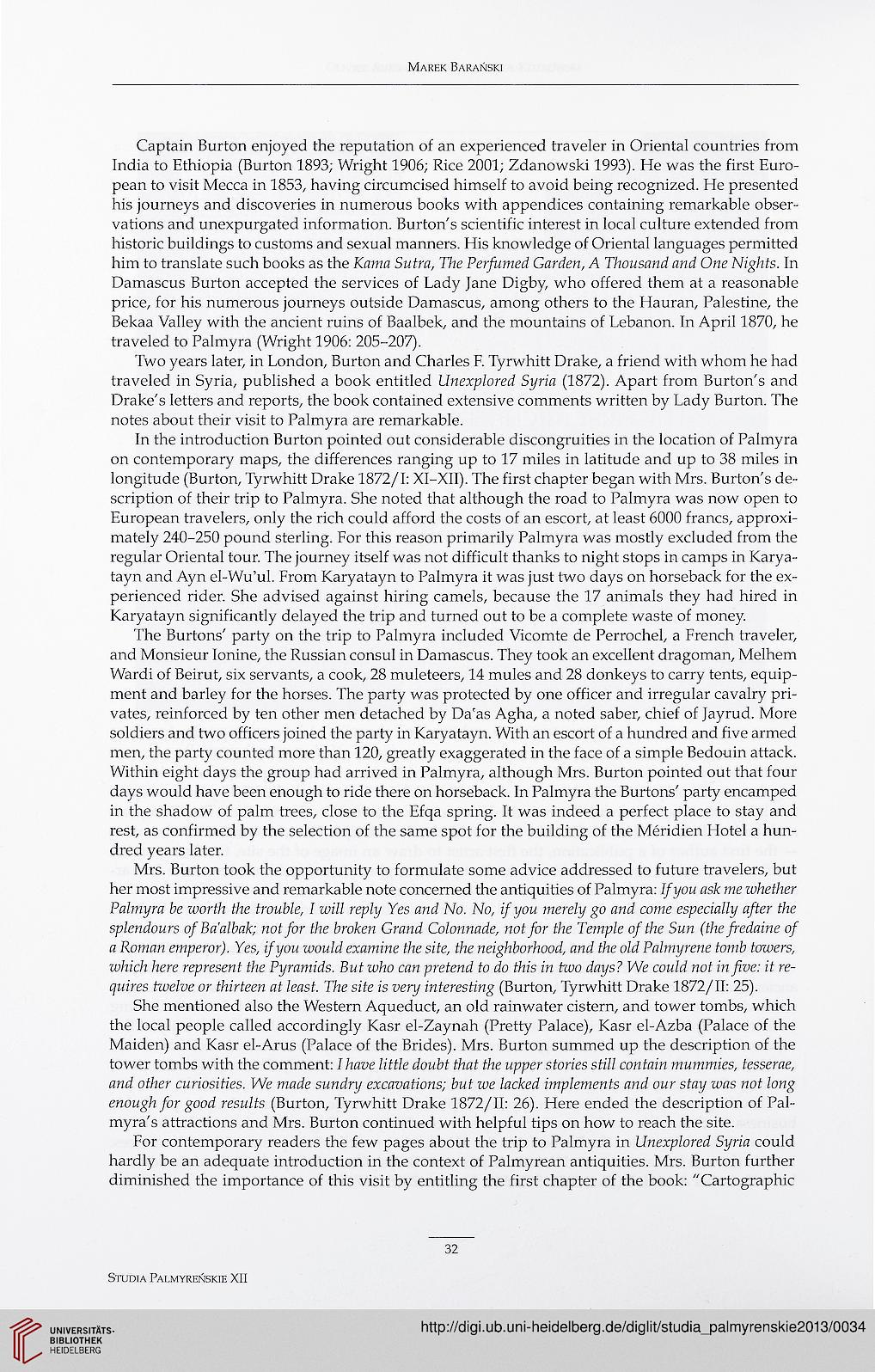 Captain Burton enjoyed the reputation of an experienced traveler in Oriental countries from
India to Ethiopia (Burton 1893; Wright 1906; Rice 2001; Zdanowski 1993). He was the first Euro-
pean to visit Mecca in 1853, having circumcised himself to avoid being recognized. He presented
his journeys and discoveries in numerous books with appendices containing remarkable obser-
vations and unexpurgated information. Burton's scientific interest in local culture extended from
historie buildings to customs and sexual manners. His knowledge of Oriental languages permitted
him to translate such books as the Kama Sutra, The Perfumed Garden, A Thousand and One Nights. In
Damascus Burton accepted the services of Lady Jane Digby, who offered them at a reasonable
price, for his numerous journeys outside Damascus, among others to the Hauran, Palestine, the
Bekaa Valley with the ancient ruins of Baalbek, and the mountains of Lebanon. In April 1870, he
traveled to Palmyra (Wright 1906: 205-207).

Two years later, in London, Burton and Charles F. Tyrwhitt Drakę, a friend with whom he had
traveled in Syria, published a book entitled Unexplored Syria (1872). Apart from Burton's and
Drakę's letters and reports, the book contained extensive comments written by Lady Burton. The
notes about their visit to Palmyra are remarkable.

In the introduction Burton pointed out considerable discongruities in the location of Palmyra
on contemporary maps, the differences ranging up to 17 miles in latitude and up to 38 miles in
longitude (Burton, Tyrwhitt Drakę 1872/1: XI-XII). The first chapter began with Mrs. Burton's de-
scription of their trip to Palmyra. She noted that although the road to Palmyra was now open to
European travelers, only the rich could afford the costs of an escort, at least 6000 franes, approxi-
mately 240-250 pound sterling. For this reason primarily Palmyra was mostly excluded from the
regular Oriental tour. The journey itself was not difficult thanks to night stops in camps in Karya-
tayn and Ayn el-Wu’ul. From Karyatayn to Palmyra it was just two days on horseback for the ex~
perienced rider. She advised against hiring camels, because the 17 animals they had hired in
Karyatayn significantly delayed the trip and turned out to be a complete waste of money.

The Burtons' party on the trip to Palmyra included Vicomte de Perrochel, a French traveler,
and Monsieur Ionine, the Russian consul in Damascus. They took an excellent dragoman, Melhem
Wardi of Beirut, six servants, a cook, 28 muleteers, 14 mules and 28 donkeys to carry tents, eąuip-
ment and barley for the horses. The party was protected by one officer and irregular cavalry pri-
vates, reinforced by ten other men detached by Da'as Agha, a noted saber, chief of Jayrud. Morę
soldiers and two officers joined the party in Karyatayn. With an escort of a hundred and five armed
men, the party counted morę than 120, greatly exaggerated in the face of a simple Bedouin attack.
Within eight days the group had arrived in Palmyra, although Mrs. Burton pointed out that four
days would have been enough to ride there on horseback. In Palmyra the Burtons' party encamped
in the shadow of palm trees, close to the Efqa spring. It was indeed a perfect place to stay and
rest, as confirmed by the selection of the same spot for the building of the Meridien Hotel a hun-
dred years later.

Mrs. Burton took the opportunity to formulate some advice addressed to futurę travelers, but
her most impressive and remarkable notę concemed the antiquities of Palmyra: Ifyou ask me whether
Palmyra be worth the trouble, I will reply Yes and No. No, ifyou merely go and come especially after the
splendours ofBaalbak; not for the broken Grand Colonnade, not for the Tempie of the Sun (the fredaine of
a Roman emperor). Yes, ifyou would examine the site, the neighborhood, and the old Palmyrene tomb towers,
which here represent the Pyramids. But who can pretend to do this in two days? We could not infve: it re-
quires twelve or thirteen at least. Tire site is very interesting (Burton, Tyrwhitt Drakę 1872/11: 25).

She mentioned also the Western Aqueduct, an old rainwater cistern, and tower tombs, which
the local people called accordingly Kasr el-Zaynah (Pretty Pałace), Kasr el-Azba (Pałace of the
Maiden) and Kasr el-Arus (Pałace of the Brides). Mrs. Burton summed up the description of the
tower tombs with the comment: I have little doubt that the upper stońes still contain mummies, tesserae,
and other curiosities. We madę sundry excavations; but we lacked implements and our stay was not long
enough for good residts (Burton, Tyrwhitt Drakę 1872/11: 26). Here ended the description of Pal-
myra's attractions and Mrs. Burton continued with helpful tips on how to reach the site.

For contemporary readers the few pages about the trip to Palmyra in Unexplored Syna could
hardly be an adequate introduction in the context of Palmyrean antiquities. Mrs. Burton further
diminished the importance of this visit by entitling the first chapter of the book: "Cartographic