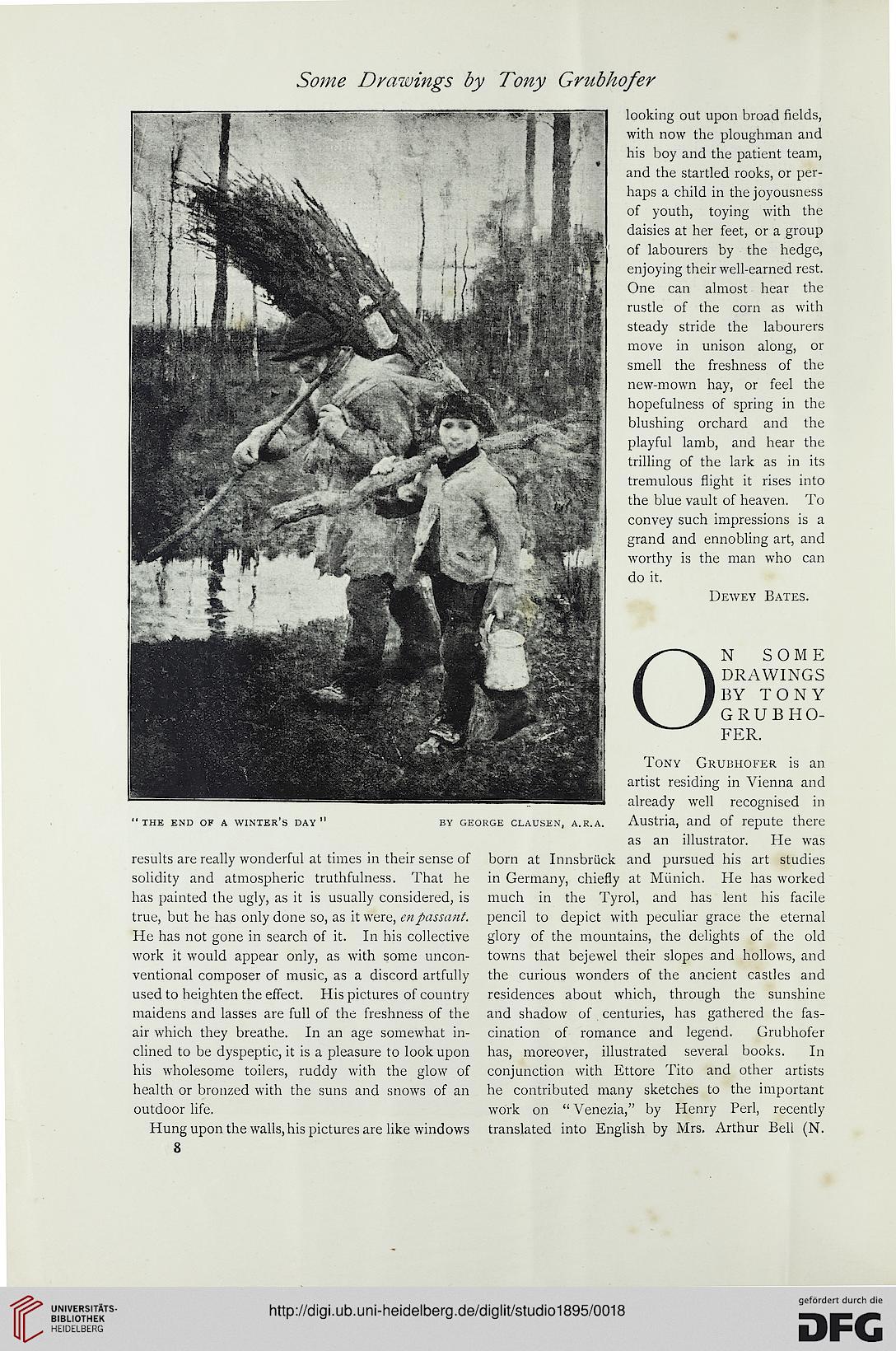 Information about OCR text
Some Drawings by Tony Grubhofer

looking out upon broad fields,
with now the ploughman and
his boy and the patient team,
and the startled rooks, or per-
haps a child in the joyousness
of youth, toying with the
daisies at her feet, or a group
of labourers by the hedge,
enjoying their well-earned rest.
One can almost hear the
rustle of the corn as with
steady stride the labourers
move in unison along, or
smell the freshness of the
new-mown hay, or feel the
hopefulness of spring in the
blushing orchard and the
playful lamb, and hear the
trilling of the lark as in its
tremulous flight it rises into
the blue vault of heaven. To
convey such impressions is a
grand and ennobling art, and
worthy is the man who can
do it.

Tony Grubhofer is an
artist residing in Vienna and
already well recognised in
"the end of a winter's day " by george clausen, a.r.a. Austria, and of repute there

as an illustrator. He was

results are really wonderful at times in their sense of born at Innsbruck and pursued his art studies
solidity and atmospheric truthfulness. That he in Germany, chiefly at Miinich. He has worked
has painted the ugly, as it is usually considered, is much in the Tyrol, and has lent his facile
true, but he has only done so, as it were, en passant, pencil to depict with peculiar grace the eternal
He has not gone in search of it. In his collective glory of the mountains, the delights of the old
work it would appear only, as with some uncon- towns that bejewel their slopes and hollows, and
ventional composer of music, as a discord artfully the curious wonders of the ancient castles and
used to heighten the effect. His pictures of country residences about which, through the sunshine
maidens and lasses are full of the freshness of the and shadow of centuries, has gathered the fas-
air which they breathe. In an age somewhat in- cination of romance and legend. Grubhofer
clined to be dyspeptic, it is a pleasure to look upon has, moreover, illustrated several books. In
his wholesome toilers, ruddy with the glow of conjunction with Ettore Tito and other artists
health or bronzed with the suns and snows of an he contributed many sketches to the important
outdoor life. work on " Venezia," by Henry Perl, recently

Hung upon the walls, his pictures are like windows translated into English by Mrs. Arthur Bell (N.
8