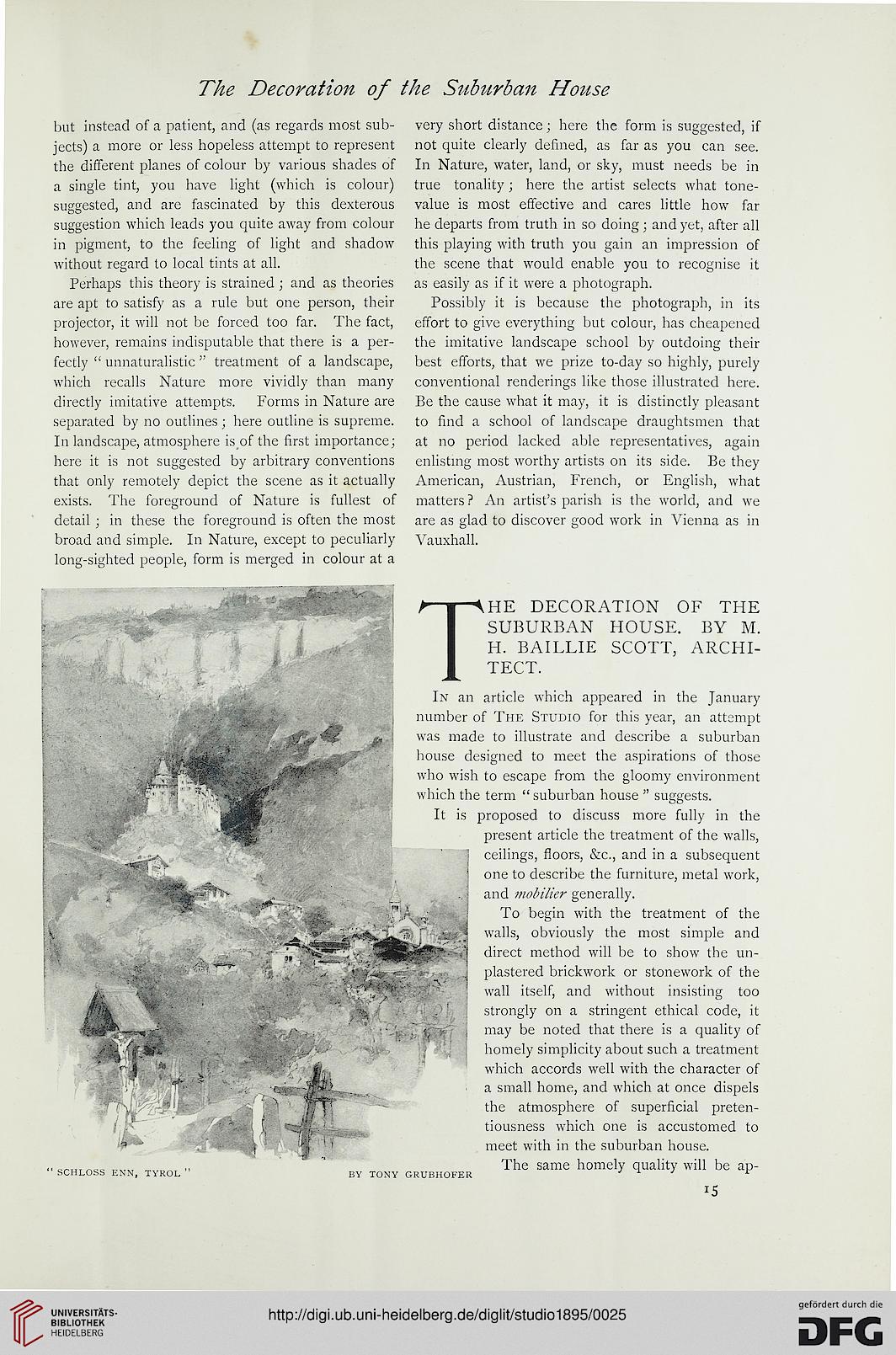 Information about OCR text
The Decoration of the Suburban House

but instead of a patient, and (as regards most sub- very short distance; here the form is suggested, if
jects) a more or less hopeless attempt to represent not quite clearly defined, as far as you can see.
the different planes of colour by various shades of In Nature, water, land, or sky, must needs be in
a single tint, you have light (which is colour) true tonality; here the artist selects what tone-
suggested, and are fascinated by this dexterous value is most effective and cares little how far
suggestion which leads you quite away from colour he departs from truth in so doing ; and yet, after all
in pigment, to the feeling of light and shadow this playing with truth you gain an impression of
without regard to local tints at all. the scene that would enable you to recognise it

Perhaps this theory is strained ; and as theories as easily as if it were a photograph,
are apt to satisfy as a rule but one person, their Possibly it is because the photograph, in its
projector, it will not be forced too far. The fact, effort to give everything but colour, has cheapened
however, remains indisputable that there is a per- the imitative landscape school by outdoing their
fectly " unnaturalistic " treatment of a landscape, best efforts, that we prize to-day so highly, purely
which recalls Nature more vividly than many conventional renderings like those illustrated here,
directly imitative attempts. Forms in Nature are Be the cause what it may, it is distinctly pleasant
separated by no outlines; here outline is supreme. to find a school of landscape draughtsmen that
In landscape, atmosphere is of the first importance; at no period lacked able representatives, again
here it is not suggested by arbitrary conventions enlisting most worthy artists on its side. Be they
that only remotely depict the scene as it actually American, Austrian, French, or English, what
exists. The foreground of Nature is fullest of matters ? An artist's parish is the world, and we
detail ; in these the foreground is often the most are as glad to discover good work in Vienna as in
broad and simple. In Nature, except to peculiarly Vauxhall.
long-sighted people, form is merged in colour at a

HE DECORATION OF THE
SUBURBAN HOUSE. BY M.
H. BAILLIE SCOTT, ARCHI-
TECT.

In an article which appeared in the January
number of The Studio for this year, an attempt
was made to illustrate and describe a suburban
house designed to meet the aspirations of those
who wish to escape from the gloomy environment
which the term " suburban house " suggests.

It is proposed to discuss more fully in the
present article the treatment of the walls,
| ceilings, floors, &c, and in a subsequent
I one to describe the furniture, metal work,
.. j and mobilier generally.

To begin with the treatment of the
walls, obviously the most simple and
direct method will be to show the un-
plastered brickwork or stonework of the
wall itself, and without insisting too
strongly on a stringent ethical code, it
may be noted that there is a quality of
homely simplicity about such a treatment
which accords well with the character of
'■*'' i a small home, and which at once dispels

' ' tiousness which one is accustomed to

c,mncc „„„ The same homely quality will be ap-