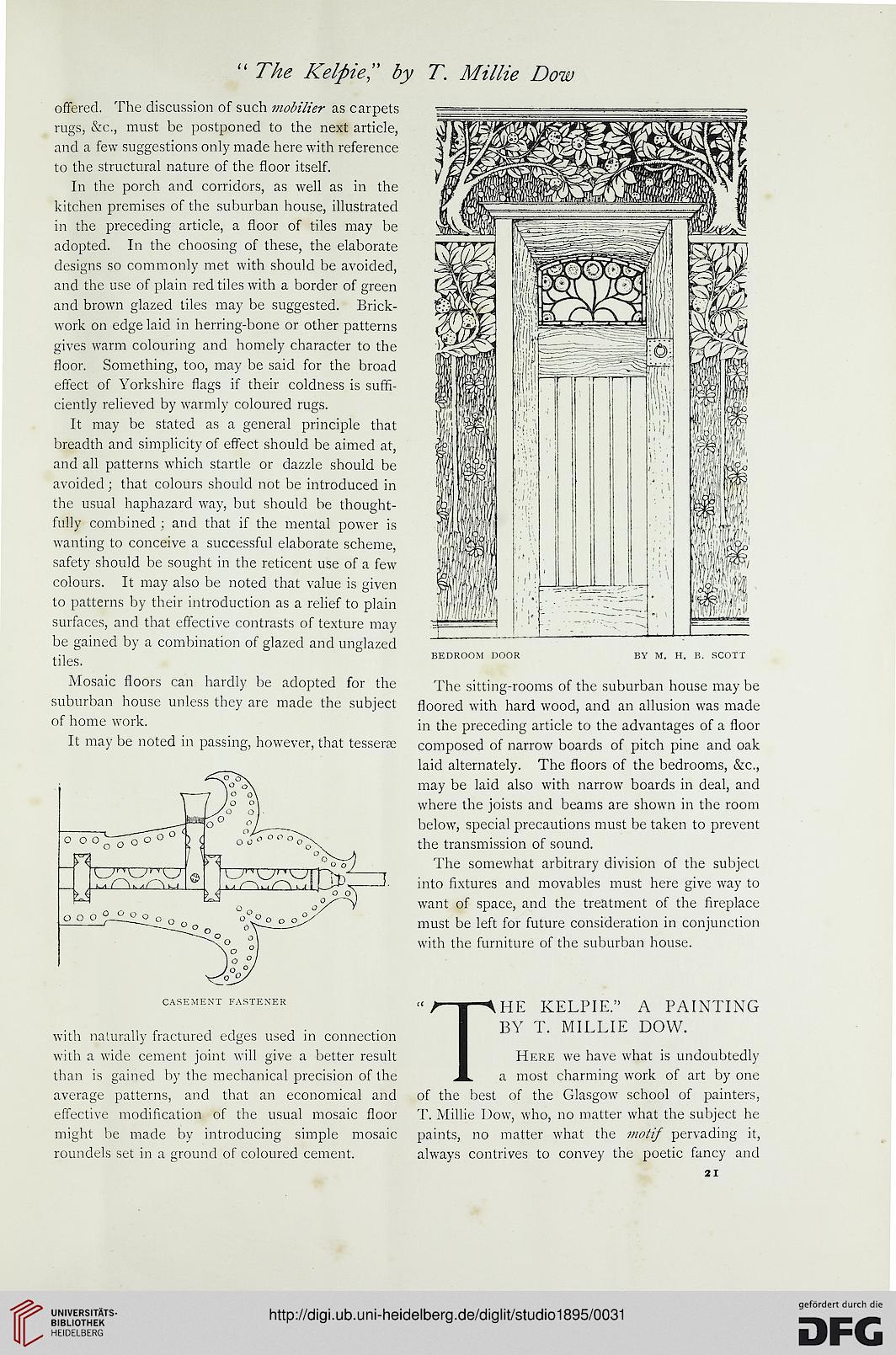 Information about OCR text
" The Kelpie^ by T. Millie Dow

offered. The discussion of such mobilier as carpets
rugs, &c.j must be postponed to the next article,
and a few suggestions only made here with reference
to the structural nature of the floor itself.

In the porch and corridors, as well as in the
kitchen premises of the suburban house, illustrated
in the preceding article, a floor of tiles may be
adopted. In the choosing of these, the elaborate
designs so commonly met with should be avoided,
and the use of plain red tiles with a border of green
and brown glazed tiles may be suggested. Brick-
work on edge laid in herring-bone or other patterns
gives warm colouring and homely character to the
floor. Something, too, may be said for the broad
effect of Yorkshire flags if their coldness is suffi-
ciently relieved by warmly coloured rugs.

It may be stated as a general principle that
breadth and simplicity of effect should be aimed at,
and all patterns which startle or dazzle should be
avoided; that colours should not be introduced in
the usual haphazard way, but should be thought-
fully combined ; and that if the mental power is
wanting to conceive a successful elaborate scheme,
safety should be sought in the reticent use of a few
colours. It may also be noted that value is given
to patterns by their introduction as a relief to plain
surfaces, and that effective contrasts of texture may
be gained by a combination of glazed and unglazed
tiles.

Mosaic floors can hardly be adopted for the
suburban house unless they are made the subject
of home work.

It may be noted in passing, however, that tesserae

with naturally fractured edges used in connection
with a wide cement joint will give a better result
than is gained by the mechanical precision of the
average patterns, and that an economical and
effective modification of the usual mosaic floor
might be made by introducing simple mosaic
roundels set in a ground of coloured cement.

The sitting-rooms of the suburban house may be
floored with hard wood, and an allusion was made
in the preceding article to the advantages of a floor
composed of narrow boards of pitch pine and oak
laid alternately. The floors of the bedrooms, &c,
may be laid also with narrow boards in deal, and
where the joists and beams are shown in the room
below, special precautions must be taken to prevent
the transmission of sound.

The somewhat arbitrary division of the subject
into fixtures and movables must here give way to
want of space, and the treatment of the fireplace
must be left for future consideration in conjunction
with the furniture of the suburban house.

HE KELPIE." A PAINTING
BY T. MILLIE DOW.