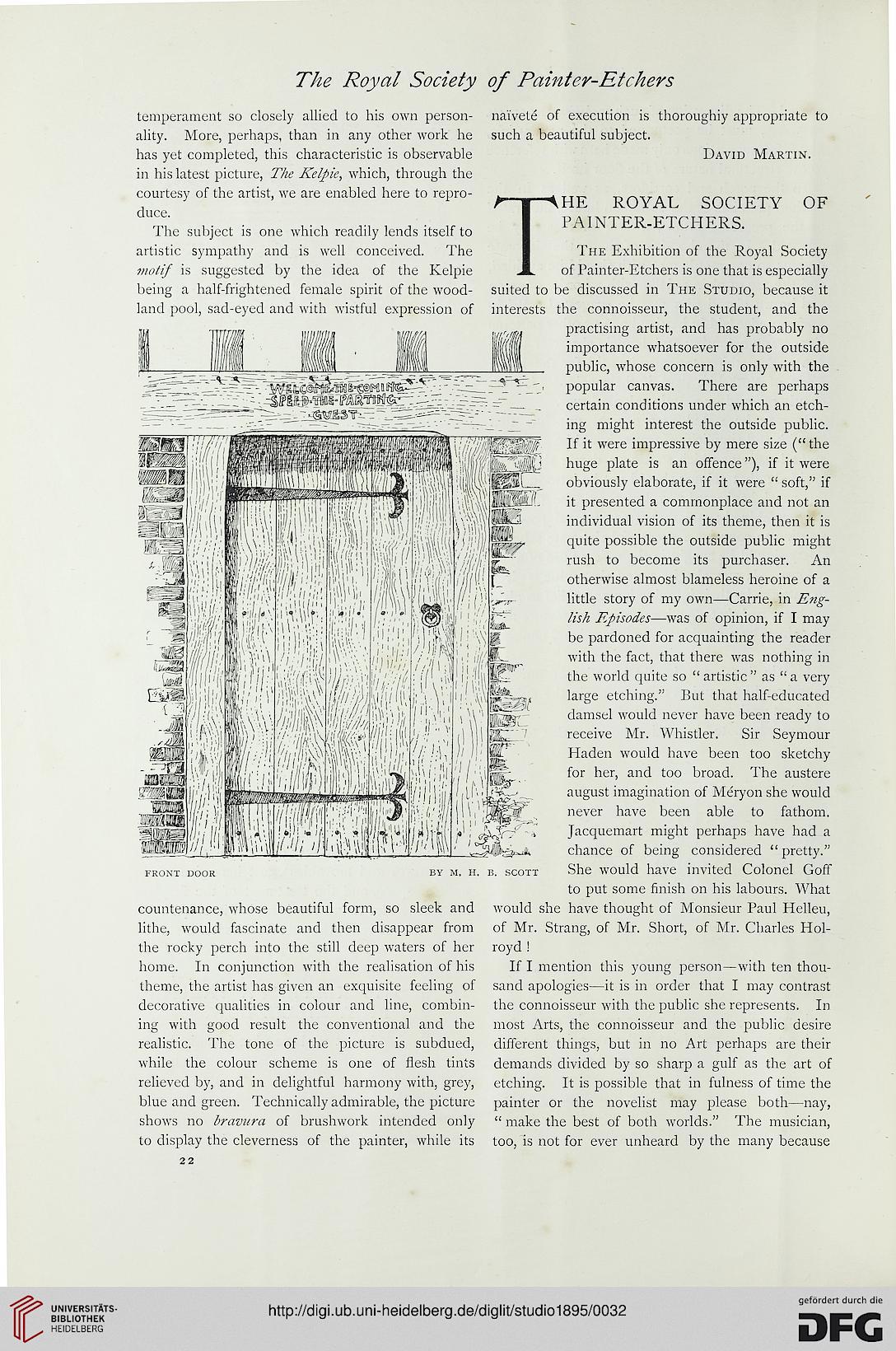 Information about OCR text
The Royal Society of Painter-Etc hers

HE ROYAL SOCIETY OF
PAINTER-ETCHERS.

temperament so closely allied to his own person- naivete of execution is thoroughly appropriate to
ality. More, perhaps, than in any other work he such a beautiful subject.

has yet completed, this characteristic is observable David Martin.

in his latest picture, The Kelpie, which, through the
courtesy of the artist, we are enabled here to repro-
duce.

The subject is one which readily lends itself to
artistic sympathy and is well conceived. The The Exhibition of the Royal Society

being a half-frightened female spirit of the wood- suited to be discussed in The Studio, because it
land pool, sad-eyed and with wistful expression of interests the connoisseur, the student, and the

practising artist, and has probably no
importance whatsoever for the outside
public, whose concern is only with the
popular canvas. There are perhaps
— - • — - l-^fiW^^^M^Z-J^L-.-^^ ^_ _ certain conditions under which an etch-
ing might interest the outside public.
If it were impressive by mere size ("the
huge plate is an offence"), if it were
obviously elaborate, if it were " soft," if
it presented a commonplace and not an
individual vision of its theme, then it is
quite possible the outside public might
rush to become its purchaser. An
otherwise almost blameless heroine of a
little story of my own—Carrie, in Eng-
lish Episodes—was of opinion, if I may
be pardoned for acquainting the reader
with the fact, that there was nothing in

the world quite so " artistic" as " a very
large etching." But that half-educated
damsel would never have been ready to
receive Mr. Whistler. Sir Seymour
Haden would have been too sketchy
for her, and too broad. The austere
august imagination of Meryon she would
never have been able to fathom.
Jacquemart might perhaps have had a
chance of being considered "pretty."
front door by m. h. b. scott She would have invited Colonel Goff

to put some finish on his labours. What
countenance, whose beautiful form, so sleek and would she have thought of Monsieur Paul Helleu,
lithe, would fascinate and then disappear from of Mr. Strang, of Mr. Short, of Mr. Charles Hol-
the rocky perch into the still deep waters of her royd !

home. In conjunction with the realisation of his If I mention this young person—with ten thou-
theme, the artist has given an exquisite feeling of sand apologies—it is in order that I may contrast
decorative qualities in colour and line, combin- the connoisseur with the public she represents. In
ing with good result the conventional and the most Arts, the connoisseur and the public desire
realistic. The tone of the picture is subdued, different things, but in no Art perhaps are their
while the colour scheme is one of flesh tints demands divided by so sharp a gulf as the art of
relieved by, and in delightful harmony with, grey, etching. It is possible that in fulness of time the
blue and green. Technically admirable, the picture painter or the novelist may please both—nay,
shows no bravura of brushwork intended only " make the best of both worlds." The musician,
to display the cleverness of the painter, while its too, is not for ever unheard by the many because
22