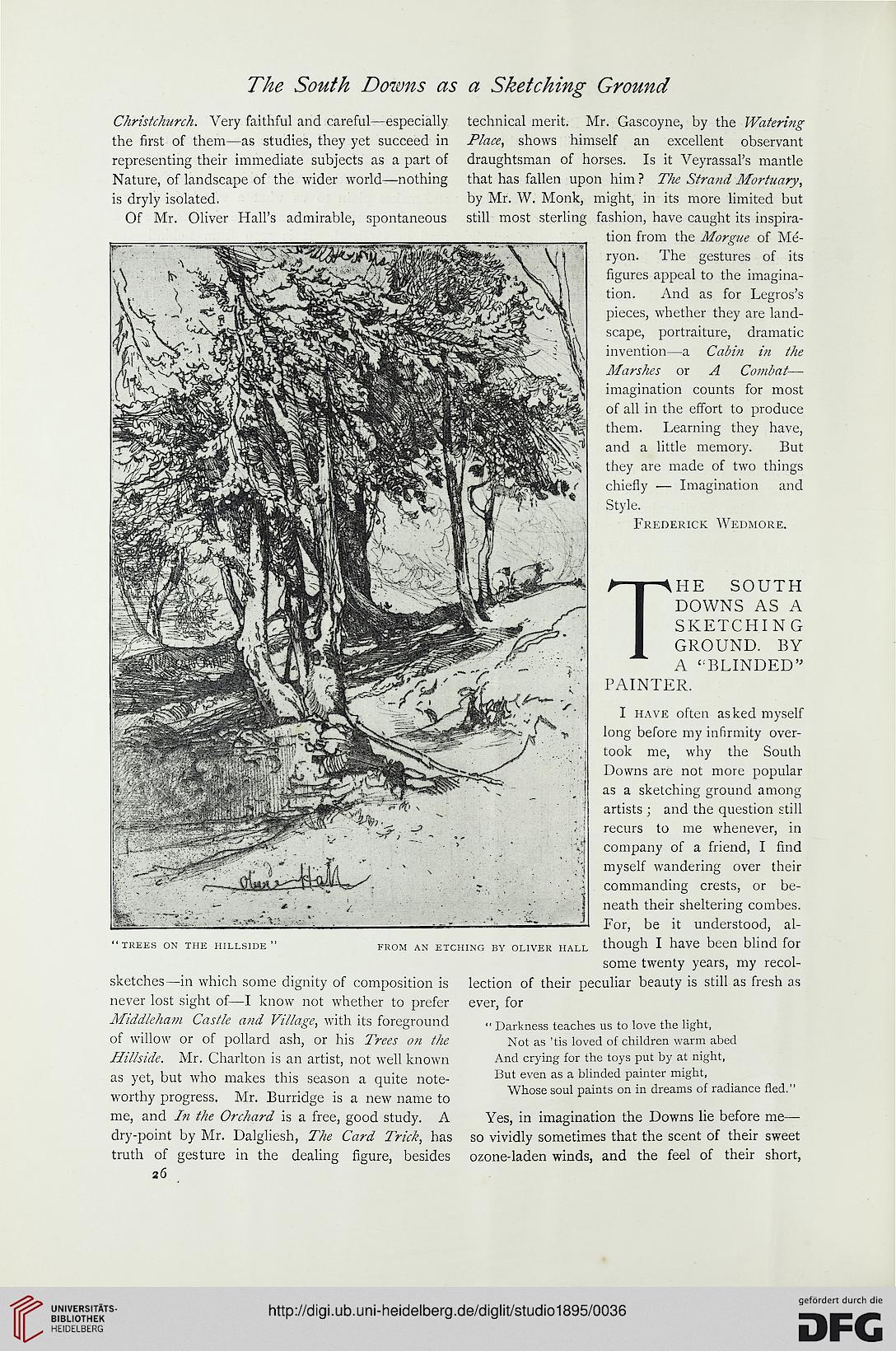 Information about OCR text
The South Downs as a Sketching Ground

Christchnrch. Very faithful and careful—especially technical merit. Mr. Gascoyne, by the Watering
the first of them—as studies, they yet succeed in Place, shows himself an excellent observant
representing their immediate subjects as a part of draughtsman of horses. Is it Veyrassal's mantle
Nature, of landscape of the wider world—nothing that has fallen upon him ? The Strand Mortuary,
is dryly isolated. by Mr. W. Monk, might, in its more limited but

Of Mr. Oliver Hall's admirable, spontaneous still most sterling fashion, have caught its inspira-
tion from the Morgue of Me-
ryon. The gestures of its
figures appeal to the imagina-
tion. And as for Legros's
pieces, whether they are land-
scape, portraiture, dramatic
invention—a Cabin in the
Marshes or A Combat—
imagination counts for most
of all in the effort to produce
them. Learning they have,
and a little memory. But
they are made of two things
chiefly — Imagination and
Style.

THE SOUTH
DOWNS AS A
SKETCHIN G
GROUND. BY
A ''BLINDED"
PAINTER.

I have often asked myself
long before my infirmity over-
took me, why the South
Downs are not more popular
as a sketching ground among
artists ; and the question still
recurs to me whenever, in
company of a friend, I find
myself wandering over their
commanding crests, or be-
neath their sheltering combes.
For, be it understood, al-

some twenty years, my recol-

sketches—in which some dignity of composition is lection of their peculiar beauty is still as fresh as
never lost sight of—I know not whether to prefer ever, for

Middleham Castle and Village, with its foreground ,. Darkness teaches us to love the light,

of willow or of pollard ash, or his Trees on the Not as 'tis loved of children warm abed

Hillside. Mr. Charlton is an artist, not well known And crying for the toys put by at night,

as yet, but who makes this season a quite note- But even as a blinded Painter mi§ht'

, r -r, ., Whose soul paints on in dreams of radiance fled."
worthy progress. Mr. Burndge is a new name to

me, and In the Orchard is a free, good study. A Yes, in imagination the Downs lie before me—

dry-point by Mr. Dalgliesh, The Card Trick, has so vividly sometimes that the scent of their sweet

truth of gesture in the dealing figure, besides ozone-laden winds, and the feel of their short,
26