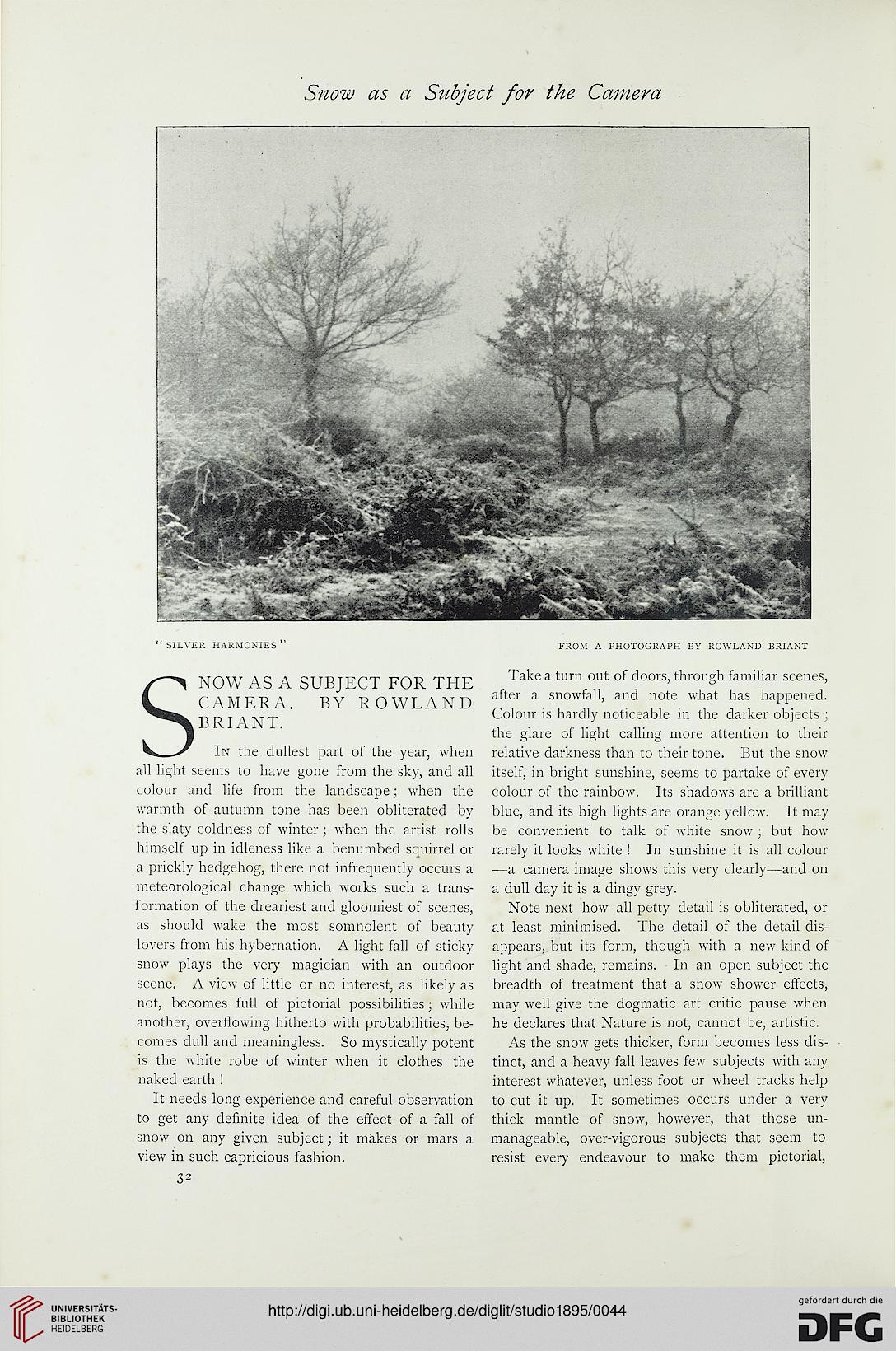 Information about OCR text
Snow as a Stibject for the Camera

SNOW AS A SUBJECT FOR THE
CAMERA. BY ROWLAND
B RIANT.
In the dullest part of the year, when
all light seems to have gone from the sky, and all
colour and life from the landscape; when the
warmth of autumn tone has been obliterated by
the slaty coldness of winter ; when the artist rolls
himself up in idleness like a benumbed squirrel or
a prickly hedgehog, there not infrequently occurs a
meteorological change which works such a trans-
formation of the dreariest and gloomiest of scenes,
as should wake the most somnolent of beauty
lovers from his hybernation. A light fall of sticky
snow plays the very magician with an outdoor
scene. A view of little or no interest, as likely as
not, becomes full of pictorial possibilities) while
another, overflowing hitherto with probabilities, be-
comes dull and meaningless. So mystically potent
is the white robe of winter when it clothes the
naked earth !

It needs long experience and careful observation
to get any definite idea of the effect of a fall of
snow on any given subject; it makes or mars a
view in such capricious fashion.
32

Take a turn out of doors, through familiar scenes,
after a snowfall, and note what has happened.
Colour is hardly noticeable in the darker objects ;
the glare of light calling more attention to their
relative darkness than to their tone. But the snow
itself, in bright sunshine, seems to partake of every
colour of the rainbow. Its shadows are a brilliant
blue, and its high lights are orange yellow. It may
be convenient to talk of white snow ; but how
rarely it looks white ! In sunshine it is all colour
—a camera image shows this very clearly—and on
a dull day it is a dingy grey.

Note next how all petty detail is obliterated, or
at least minimised. The detail of the detail dis-
appears, but its form, though with a new kind of
light and shade, remains. In an open subject the
breadth of treatment that a snow shower effects,
may well give the dogmatic art critic pause when
he declares that Nature is not, cannot be, artistic.

As the snow gets thicker, form becomes less dis-
tinct, and a heavy fall leaves few subjects with any
interest whatever, unless foot or wheel tracks help
to cut it up. It sometimes occurs under a very
thick mantle of snow, however, that those un-
manageable, over-vigorous subjects that seem to
resist every endeavour to make them pictorial,