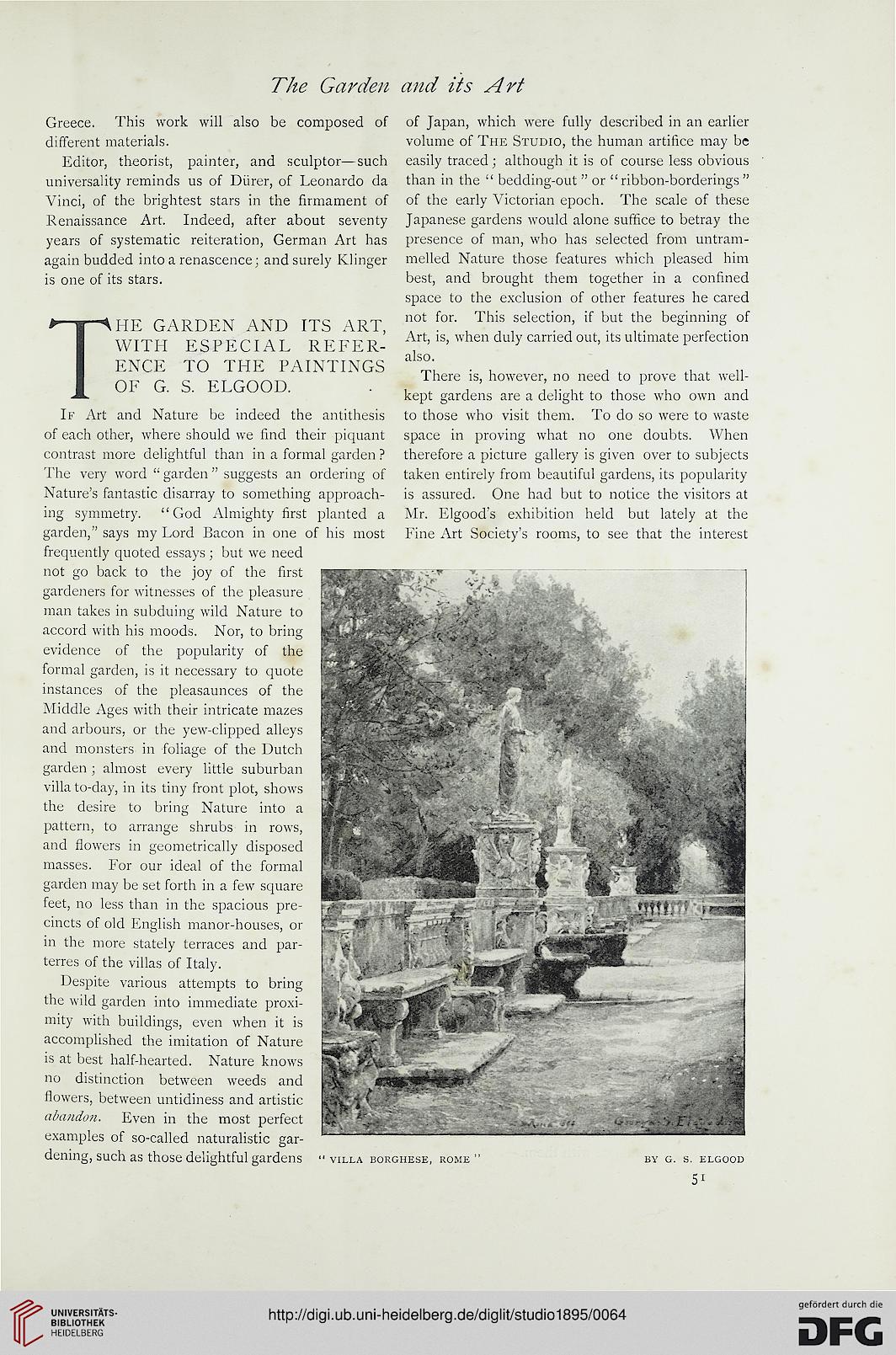 Information about OCR text
The Garden and its Art

Greece. This work will also be composed of of Japan, which were fully described in an earlier

different materials. volume of The Studio, the human artifice may be

Editor, theorist, painter, and sculptor—such easily traced; although it is of course less obvious

Vinci, of the brightest stars in the firmament of of the early Victorian epoch. The scale of these

Renaissance Art. Indeed, after about seventy Japanese gardens would alone suffice to betray the

years of systematic reiteration, German Art has presence of man, who has selected from untram-

again budded into a renascence; and surely Klinger melled Nature those features which pleased him

is one of its stars. best, and brought them together in a confined

space to the exclusion of other features he cared

HE GARDEN AND ITS ART,
WITH ESPECIAL REFER-
ENCE TO THE PAINTINGS
OF G. S. ELGOOD.

not for. This selection, if but the beginning of
Art, is, when duly carried out, its ultimate perfection
also.

There is, however, no need to prove that well-
kept gardens are a delight to those who own and
If Art and Nature be indeed the antithesis to those who visit them. To do so were to waste
of each other, where should we find their piquant space in proving what no one doubts. When
contrast more delightful than in a formal garden ? therefore a picture gallery is given over to subjects
The very word <; garden " suggests an ordering of taken entirely from beautiful gardens, its popularity
Nature's fantastic disarray to something approach- is assured. One had but to notice the visitors at
ing symmetry. "God Almighty first planted a Mr. Elgood's exhibition held but lately at the
garden," says my Lord Bacon in one of his most Fine Art Society's rooms, to see that the interest
frequently quoted essays ; but we need
not go back to the joy of the first
gardeners for witnesses of the pleasure
man takes in subduing wild Nature to
accord with his moods. Nor, to bring
evidence of the popularity of the
formal garden, is it necessary to quote
instances of the pleasaunces of the
Middle Ages with their intricate mazes
and arbours, or the yew-clipped alleys
and monsters in foliage of the Dutch
garden; almost every little suburban
villa to-day, in its tiny front plot, shows
the desire to bring Nature into a
pattern, to arrange shrubs in rows,
and flowers in geometrically disposed
masses. For our ideal of the formal
garden may be set forth in a few square
feet, no less than in the spacious pre-
cincts of old English manor-houses, or
in the more stately terraces and par-
terres of the villas of Italy.

Despite various attempts to bring
the wild garden into immediate proxi-
mity with buildings, even when it is
accomplished the imitation of Nature
is at best half-hearted. Nature knows
no distinction between weeds and
flowers, between untidiness and artistic
abandon. Even in the most perfect
examples of so-called naturalistic gar-
dening, such as those delightful gardens " VILLA BORGHESE, ROME BY G. S. ELGOOD