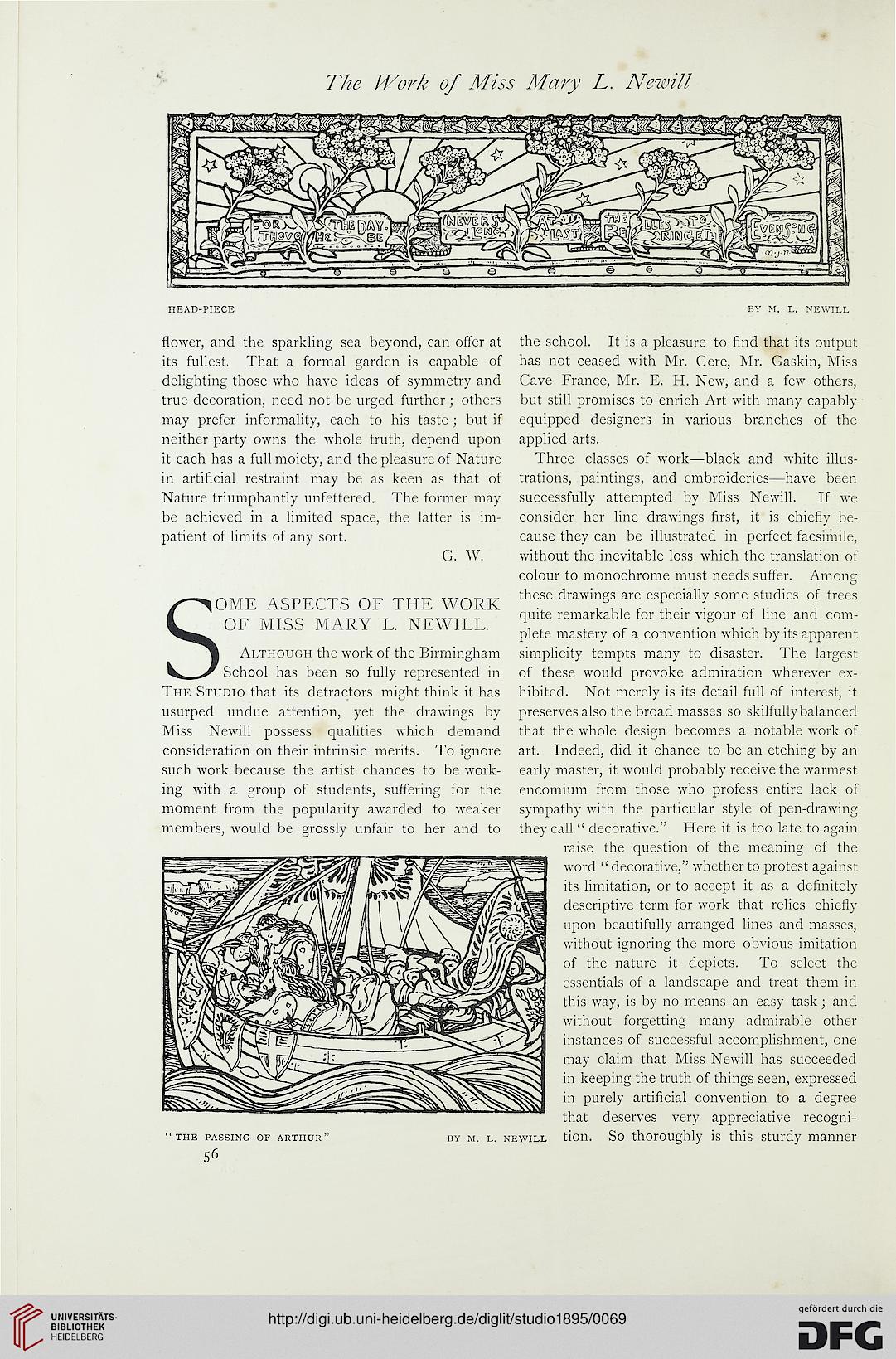 Information about OCR text
The Work of Miss Mary L. Newt I I

flower, and the sparkling sea beyond, can offer at the school. It is a pleasure to find that its output

its fullest. That a formal garden is capable of has not ceased with Mr. Gere, Mr. Gaskin, Miss

delighting those who have ideas of symmetry and Cave France, Mr. E. H. New, and a few others,

true decoration, need not be urged further; others but still promises to enrich Art with many capably

may prefer informality, each to his taste; but if equipped designers in various branches of the

neither party owns the whole truth, depend upon applied arts.

it each has a full moiety, and the pleasure of Nature Three classes of work—black and white illus-

in artificial restraint may be as keen as that of trations, paintings, and embroideries—have been

Nature triumphantly unfettered. The former may successfully attempted by Miss Newill. If we

be achieved in a limited space, the latter is im- consider her line drawings first, it is chiefly be-

patient of limits of any sort. cause they can be illustrated in perfect facsimile,

G. W. without the inevitable loss which the translation of
colour to monochrome must needs suffer. Anions;

plete mastery ot a convention which by its apparent
| Although the work of the Birmingham simplicity tempts many to disaster. The largest
School has been so fully represented in of these would provoke admiration wherever ex-
The Studio that its detractors might think it has hibited. Not merely is its detail full of interest, it
usurped undue attention, yet the drawings by preserves also the broad masses so skilfully balanced
Miss Newill possess qualities which demand that the whole design becomes a notable work of
consideration on their intrinsic merits. To ignore art. Indeed, did it chance to be an etching by an
such work because the artist chances to be work- early master, it would probably receive the warmest
ing with a group of students, suffering for the encomium from those who profess entire lack of
moment from the popularity awarded to weaker sympathy with the particular style of pen-drawing
members, would be grossly unfair to her and to they call " decorative." Here it is too late to again

raise the question of the meaning of the
word " decorative," whether to protest against
its limitation, or to accept it as a definitely
descriptive term for work that relies chiefly
upon beautifully arranged lines and masses,
without ignoring the more obvious imitation
of the nature it depicts. To select the
essentials of a landscape and treat them in
this way, is by no means an easy task; and
without forgetting many admirable other
instances of successful accomplishment, one
may claim that Miss Newill has succeeded
in keeping the truth of things seen, expressed
in purely artificial convention to a degree
that deserves very appreciative recogni-
the passing of Arthur " by m. l. newill tion. So thoroughly is this sturdy manner