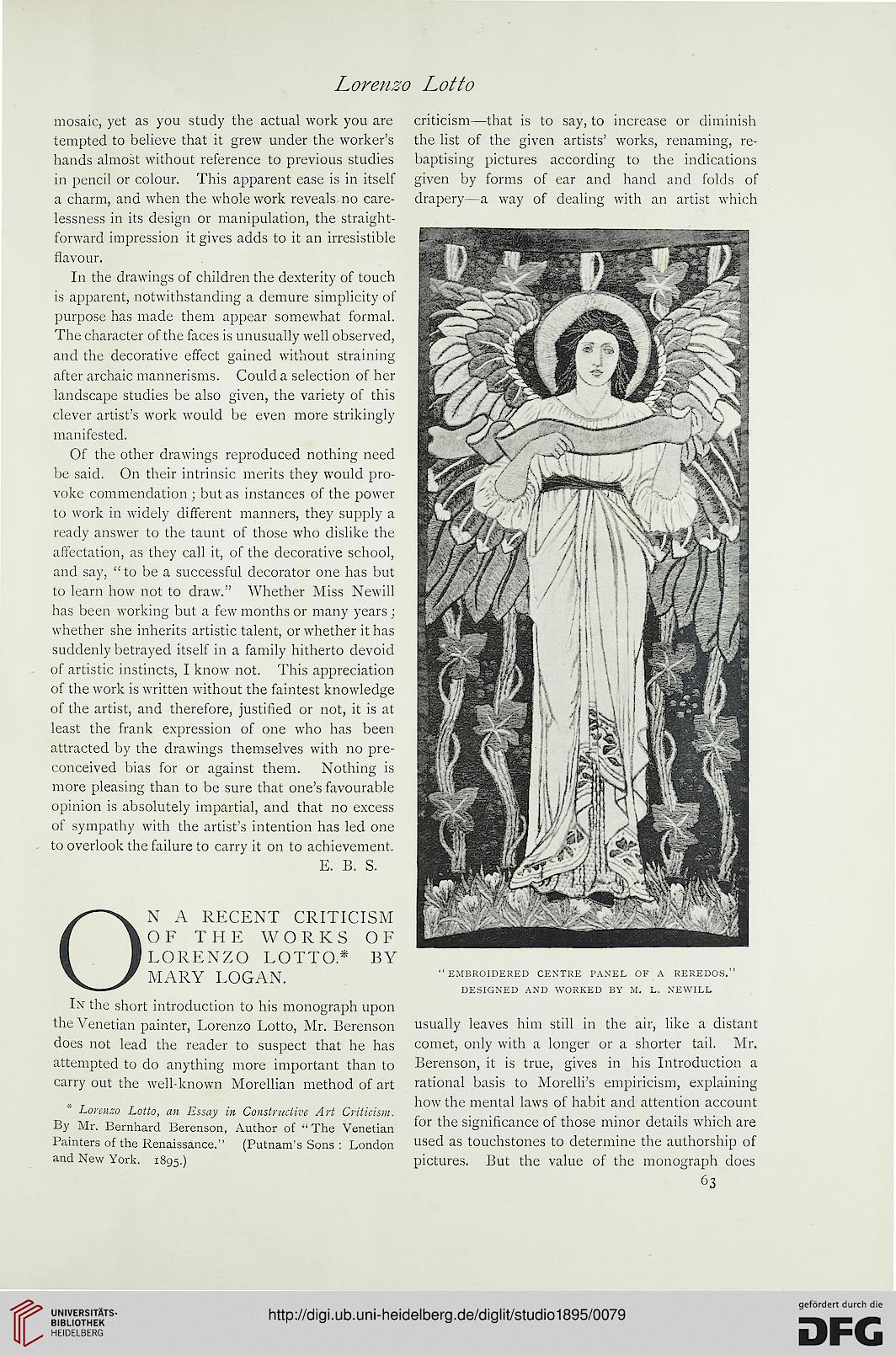 mosaic, yet as you study the actual work you are
tempted to believe that it grew under the worker's
hands almost without reference to previous studies
in pencil or colour. This apparent ease is in itself
a charm, and when the whole work reveals no care-
lessness in its design or manipulation, the straight-
forward impression it gives adds to it an irresistible
flavour.

In the drawings of children the dexterity of touch
is apparent, notwithstanding a demure simplicity of
purpose has made them appear somewhat formal.
The character of the faces is unusually well observed,
and the decorative effect gained without straining
after archaic mannerisms. Could a selection of her
landscape studies be also given, the variety of this
clever artist's work would be even more strikingly
manifested.

Of the other drawings reproduced nothing need
be said. On their intrinsic merits they would pro-
voke commendation ; but as instances of the power
to work in widely different manners, they supply a
ready answer to the taunt of those who dislike the
affectation, as they call it, of the decorative school,
and say, " to be a successful decorator one has but
to learn how not to draw." Whether Miss Newill
has been working but a few months or many years;
whether she inherits artistic talent, or whether it has
suddenly betrayed itself in a family hitherto devoid
of artistic instincts, I know not. This appreciation
of the work is written without the faintest knowledge
of the artist, and therefore, justified or not, it is at
least the frank expression of one who has been
attracted by the drawings themselves with no pre-
conceived bias for or against them. Nothing is
more pleasing than to be sure that one's favourable
opinion is absolutely impartial, and that no excess
of sympathy with the artist's intention has led one
to overlook the failure to carry it on to achievement.

ON A RECENT CRITICISM
OF THE WORKS OF
LORENZO LOTTO* BY
MARY LOGAN.

In the short introduction to his monograph upon
the Venetian painter, Lorenzo Lotto, Mr. Berenson
does not lead the reader to suspect that he has
attempted to do anything more important than to
carry out the well-known Morellian method of art

* Lorenzo Lotto, an Essay in Constructive Art Criticism.
By Mr. Bernhard Berenson, Author of "The Venetian
Painters of the Renaissance." (Putnam's Sons : London
and New York. 1895.)

criticism—that is to say, to increase or diminish
the list of the given artists' works, renaming, re-
baptising pictures according to the indications
given by forms of ear and hand and folds of
drapery—a way of dealing with an artist which

"EMBROIDERED CENTRE PANEL OF A REREDOS."
DESIGNED AND WORKED BY M. L. NEWILL

usually leaves him still in the air, like a distant
comet, only with a longer or a shorter tail. Mr.
Berenson, it is true, gives in his Introduction a
rational basis to Morelli's empiricism, explaining
how the mental laws of habit and attention account
for the significance of those minor details which are
used as touchstones to determine the authorship of
pictures. But the value of the monograph does