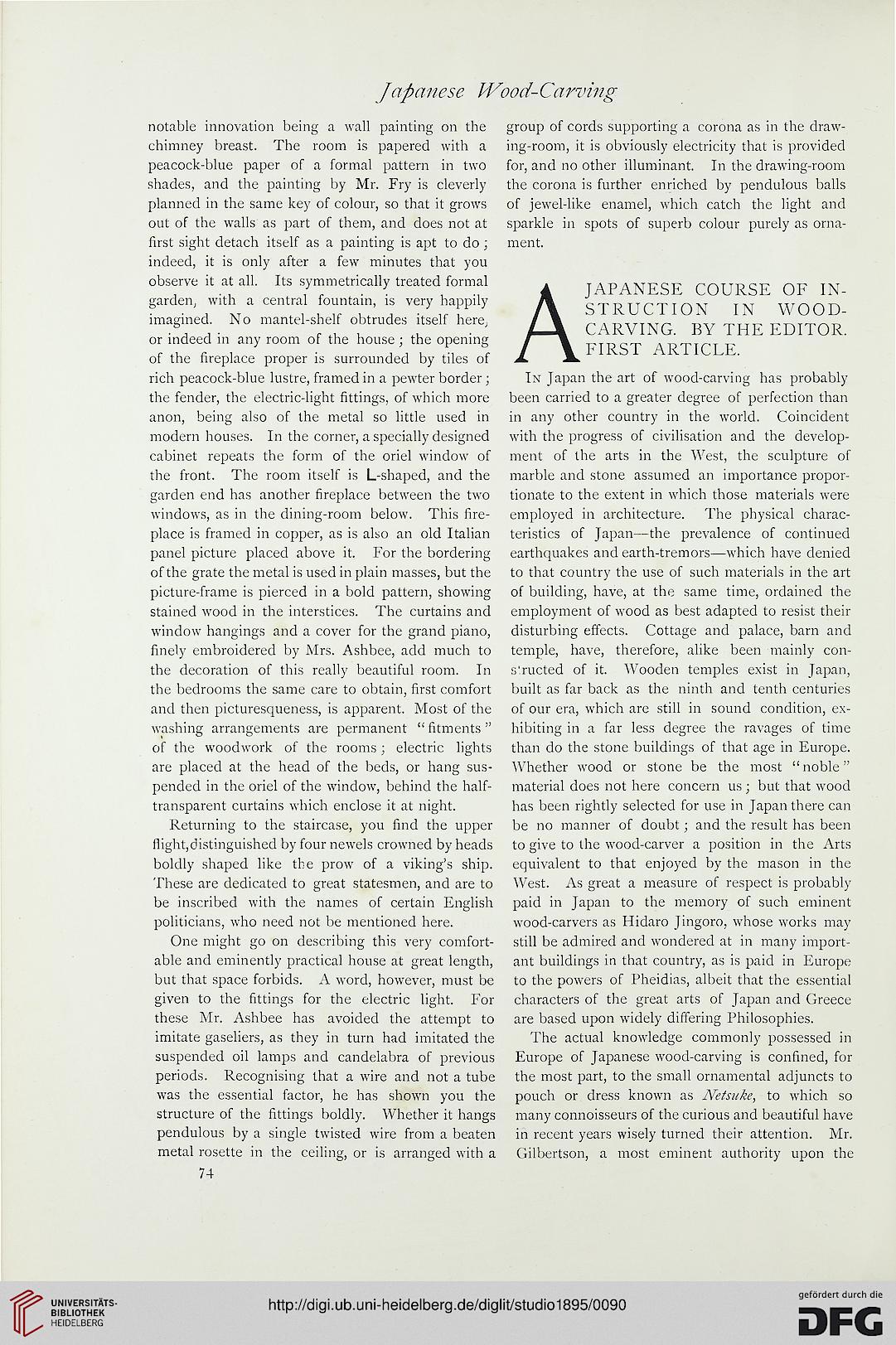 notable innovation being a wall painting on the
chimney breast. The room is papered with a
peacock-blue paper of a formal pattern in two
shades, and the painting by Mr. Fry is cleverly
planned in the same key of colour, so that it grows
out of the walls as part of them, and does not at
first sight detach itself as a painting is apt to do ;
indeed, it is only after a few minutes that you
observe it at all. Its symmetrically treated formal
garden, with a central fountain, is very happily
imagined. No mantel-shelf obtrudes itself here,
or indeed in any room of the house ; the opening
of the fireplace proper is surrounded by tiles of
rich peacock-blue lustre, framed in a pewter border;
the fender, the electric-light fittings, of which more
anon, being also of the metal so little used in
modern houses. In the corner, a specially designed
cabinet repeats the form of the oriel window of
the front. The room itself is L-shaped, and the
garden end has another fireplace between the two
windows, as in the dining-room below. This fire-
place is framed in copper, as is also an old Italian
panel picture placed above it. For the bordering
of the grate the metal is used in plain masses, but the
picture-frame is pierced in a bold pattern, showing
stained wood in the interstices. The curtains and
window hangings and a cover for the grand piano,
finely embroidered by Mrs. Ashbee, add much to
the decoration of this really beautiful room. In
the bedrooms the same care to obtain, first comfort
and then picturesqueness, is apparent. Most of the
washing arrangements are permanent " fitments "
of the woodwork of the rooms ; electric lights
are placed at the head of the beds, or hang sus-
pended in the oriel of the window, behind the half-
transparent curtains which enclose it at night.

Returning to the staircase, you find the upper
flight,distinguished by four newels crowned by heads
boldly shaped like the prow of a viking's ship.
These are dedicated to great statesmen, and are to
be inscribed with the names of certain English
politicians, who need not be mentioned here.

One might go on describing this very comfort-
able and eminently practical house at great length,
but that space forbids. A word, however, must be
given to the fittings for the electric light. For
these Mr. Ashbee has avoided the attempt to
imitate gaseliers, as they in turn had imitated the
suspended oil lamps and candelabra of previous
periods. Recognising that a wire and not a tube
was the essential factor, he has shown you the
structure of the fittings boldly. Whether it hangs
pendulous by a single twisted wire from a beaten
metal rosette in the ceiling, or is arranged with a
74

group of cords supporting a corona as in the draw-
ing-room, it is obviously electricity that is provided
for, and no other illuminant. In the drawing-room
the corona is further enriched by pendulous balls
of jewel-like enamel, which catch the light and
sparkle in spots of superb colour purely as orna-
ment.

JAPANESE COURSE OF IN-
STRUCTION IN WOOD-
CARVING. BY THE EDITOR.
FIRST ARTICLE.

In Japan the art of wood-carving has probably
been carried to a greater degree of perfection than
in any other country in the world. Coincident
with the progress of civilisation and the develop-
ment of the arts in the West, the sculpture of
marble and stone assumed an importance propor-
tionate to the extent in which those materials were
employed in architecture. The physical charac-
teristics of Japan—the prevalence of continued
earthquakes and earth-tremors—which have denied
to that country the use of such materials in the art
of building, have, at the same time, ordained the
employment of wood as best adapted to resist their
disturbing effects. Cottage and palace, barn and
temple, have, therefore, alike been mainly con-
structed of it. Wooden temples exist in Japan,
built as far back as the ninth and tenth centuries
of our era, which are still in sound condition, ex-
hibiting in a far less degree the ravages of time
than do the stone buildings of that age in Europe.
AVhether wood or stone be the most "noble"
material does not here concern us; but that wood
has been rightly selected for use in Japan there can
be no manner of doubt; and the result has been
to give to the wood-carver a position in the Arts
equivalent to that enjoyed by the mason in the
West. As great a measure of respect is probably
paid in Japan to the memory of such eminent
wood-carvers as Hidaro Jingoro, whose works may
still be admired and wondered at in many import-
ant buildings in that country, as is paid in Europe
to the powers of Pheidias, albeit that the essential
characters of the great arts of Japan and Greece
are based upon widely differing Philosophies.

The actual knowledge commonly possessed in
Europe of Japanese wood-carving is confined, for
the most part, to the small ornamental adjuncts to
pouch or dress known as Netsuke, to which so
many connoisseurs of the curious and beautiful have
in recent years wisely turned their attention. Mr.
Gilbertson, a most eminent authority upon the