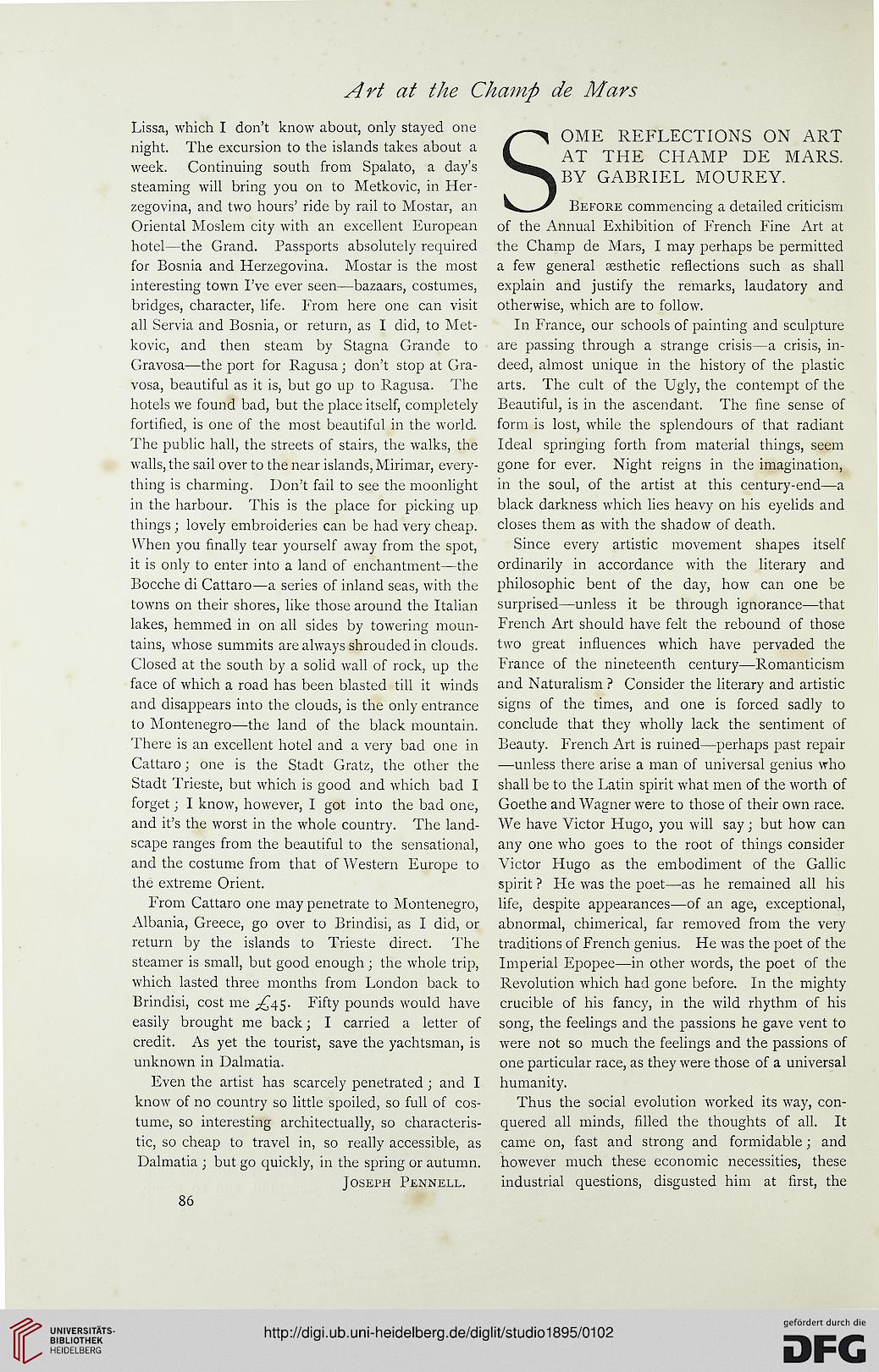 Information about OCR text
Art at the Champ de Mars

Lissa, which I don't know about, only stayed one
night. The excursion to the islands takes about a
week. Continuing south from Spalato, a day's
steaming will bring you on to Metkovic, in Her-
zegovina, and two hours' ride by rail to Mostar, an
Oriental Moslem city with an excellent European
hotel—the Grand. Passports absolutely required
for Bosnia and Herzegovina. Mostar is the most
interesting town I've ever seen—bazaars, costumes,
bridges, character, life. From here one can visit
all Servia and Bosnia, or return, as I did, to Met-
kovic, and then steam by Stagna Grande to
Gravosa—the port for Ragusa; don't stop at Gra-
vosa, beautiful as it is, but go up to Ragusa. The
hotels we found bad, but the place itself, completely
fortified, is one of the most beautiful in the world.
The public hall, the streets of stairs, the walks, the
walls, the sail over to the near islands, Mirimar, every-
thing is charming. Don't fail to see the moonlight
in the harbour. This is the place for picking up
things ; lovely embroideries can be had very cheap.
When you finally tear yourself away from the spot,
it is only to enter into a land of enchantment—the
Bocche di Cattaro—a series of inland seas, with the
towns on their shores, like those around the Italian
lakes, hemmed in on all sides by towering moun-
tains, whose summits are always shrouded in clouds.
Closed at the south by a solid wall of rock, up the
face of which a road has been blasted till it winds
and disappears into the clouds, is the only entrance
to Montenegro—the land of the black mountain.
There is an excellent hotel and a very bad one in
Cattaro; one is the Stadt Gratz, the other the
Stadt Trieste, but which is good and which bad I
forget; I know, however, I got into the bad one,
and it's the worst in the whole country. The land-
scape ranges from the beautiful to the sensational,
and the costume from that of Western Europe to
the extreme Orient.

From Cattaro one may penetrate to Montenegro,
Albania, Greece, go over to Brindisi, as I did, or
return by the islands to Trieste direct. The
steamer is small, but good enough; the whole trip,
which lasted three months from London back to
Brindisi, cost me ,£45. Fifty pounds would have
easily brought me back; I carried a letter of
credit. As yet the tourist, save the yachtsman, is
unknown in Dalmatia.

Even the artist has scarcely penetrated ; and I
know of no country so little spoiled, so full of cos-
tume, so interesting architectually, so characteris-
tic, so cheap to travel in, so really accessible, as
Dalmatia ; but go quickly, in the spring or autumn.

SOME REFLECTIONS ON ART
AT THE CHAMP DE MARS.
BY GABRIEL MOUREY.
Before commencing a detailed criticism
of the Annual Exhibition of French Fine Art at
the Champ de Mars, I may perhaps be permitted
a few general aesthetic reflections such as shall
explain and justify the remarks, laudatory and
otherwise, which are to follow.

In France, our schools of painting and sculpture
are passing through a strange crisis—a crisis, in-
deed, almost unique in the history of the plastic
arts. The cult of the Ugly, the contempt of the
Beautiful, is in the ascendant. The fine sense of
form is lost, while the splendours of that radiant
Ideal springing forth from material things, seem
gone for ever. Night reigns in the imagination,
in the soul, of the artist at this century-end—a
black darkness which lies heavy on his eyelids and
closes them as with the shadow of death.

Since every artistic movement shapes itself
ordinarily in accordance with the literary and
philosophic bent of the day, how can one be
surprised—unless it be through ignorance—that
French Art should have felt the rebound of those
two great influences which have pervaded the
France of the nineteenth century—Romanticism
and Naturalism ? Consider the literary and artistic
signs of the times, and one is forced sadly to
conclude that they wholly lack the sentiment of
Beauty. French Art is ruined—perhaps past repair
—unless there arise a man of universal genius who
shall be to the Latin spirit what men of the worth of
Goethe and Wagner were to those of their own race.
We have Victor Hugo, you will say; but how can
any one who goes to the root of things consider
Victor Hugo as the embodiment of the Gallic
spirit ? He was the poet—as he remained all his
life, despite appearances—of an age, exceptional,
abnormal, chimerical, far removed from the very
traditions of French genius. He was the poet of the
Imperial Epopee—in other words, the poet of the
Revolution which had gone before. In the mighty
crucible of his fancy, in the wild rhythm of his
song, the feelings and the passions he gave vent to
were not so much the feelings and the passions of
one particular race, as they were those of a universal
humanity.

Thus the social evolution worked its way, con-
quered all minds, filled the thoughts of all. It
came on, fast and strong and formidable; and
however much these economic necessities, these
industrial questions, disgusted him at first, the