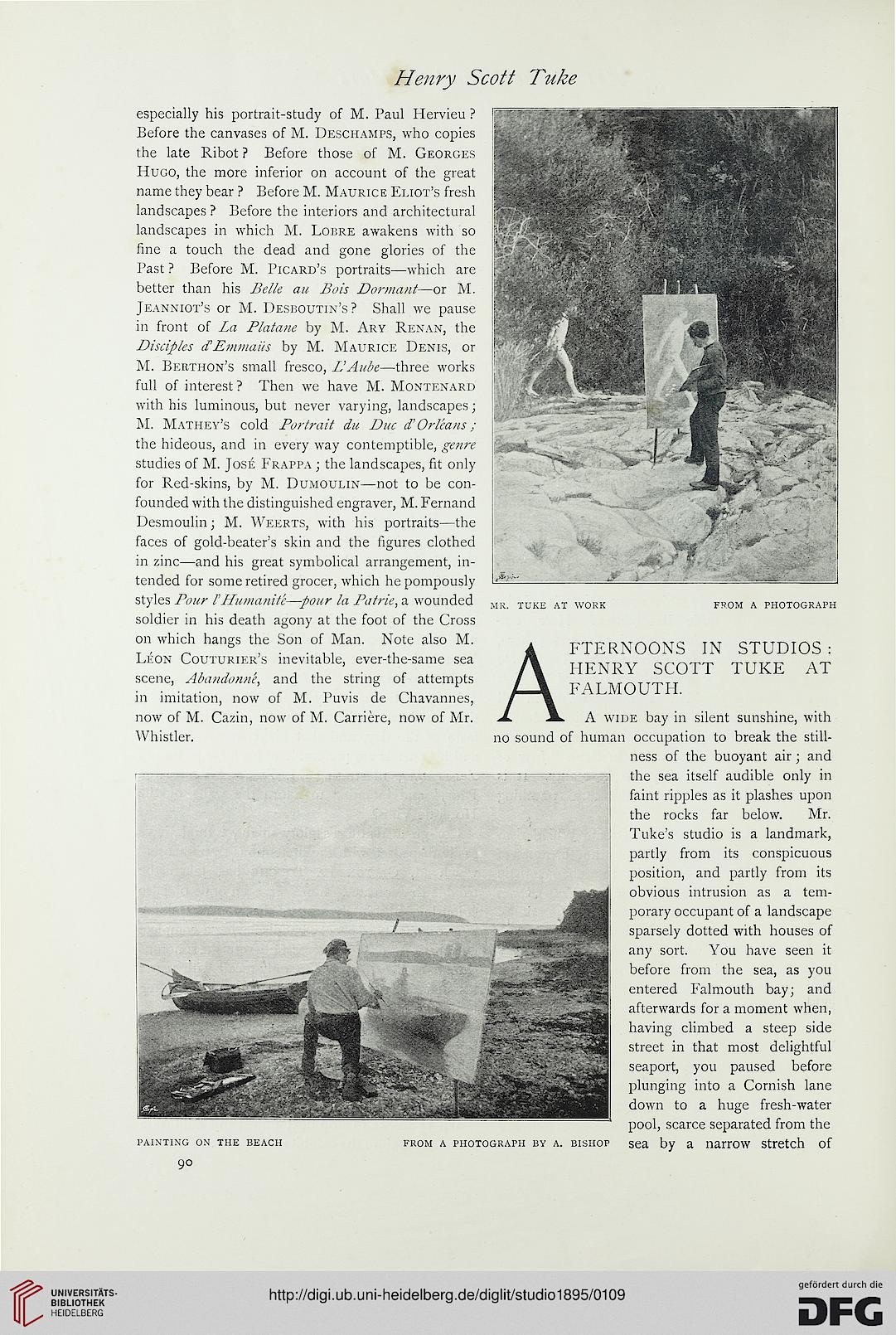 especially his portrait-study of M. Paul Hervieu ?
Before the canvases of M. Deschamps, who copies
the late Ribot ? Before those of M. Georges
Hugo, the more inferior on account of the great
name they bear ? Before M. Maurice Eliot's fresh
landscapes ? Before the interiors and architectural
landscapes in which M. Loiire awakens with so
fine a touch the dead and gone glories of the
Past ? Before M. Picard's portraits—which are
better than his Belle an Bois Dormant—or M.
Jeanniot's or M. Desboutin's? Shall we pause
in front of La Platane by M. Ary Renan, the
Disciples d'Emmaiis by M. Maurice Denis, or
M. Berthon's small fresco, D Aiebe—three works
full of interest? Then we have M. Montenard
with his luminous, but never varying, landscapes;
M. Mathey's cold Portrait die Due d'Orleans ;
the hideous, and in every way contemptible, genre
studies of M. Jose Frappa ; the landscapes, fit only
for Red-skins, by M. Dumoulin—not to be con-
founded with the distinguished engraver, M. Fernand
Desmoulin; M. Weerts, with his portraits—the
faces of gold-beater's skin and the figures clothed
in zinc—and his great symbolical arrangement, in-
tended for some retired grocer, which he pompously
styles Pour I Humanite—pour la Patrie, a wounded ,IK TUKE AX W0RK from a photograph

soldier in his death agony at the foot of the Cross

scene, Abandonne, and the string of attempts
in imitation, now of M. Puvis de Chavannes,
now of M. Cazin, now of M. Carriere, now of Mr. JL A. A wide bay in silent sunshine, with
Whistler. no sound of human occupation to break the still-

ness of the buoyant air; and
the sea itself audible only in
faint ripples as it plashes upon
the rocks far below. Mr.
Tuke's studio is a landmark,
partly from its conspicuous
position, and partly from its
obvious intrusion as a tem-
porary occupant of a landscape
sparsely dotted with houses of
any sort. You have seen it
before from the sea, as you
entered Falmouth bay; and
afterwards for a moment when,
having climbed a steep side
street in that most delightful
seaport, you paused before
plunging into a Cornish lane
down to a huge fresh-water
pool, scarce separated from the
painting on the beach from a photograph by a. bishop sea by a narrow stretch of