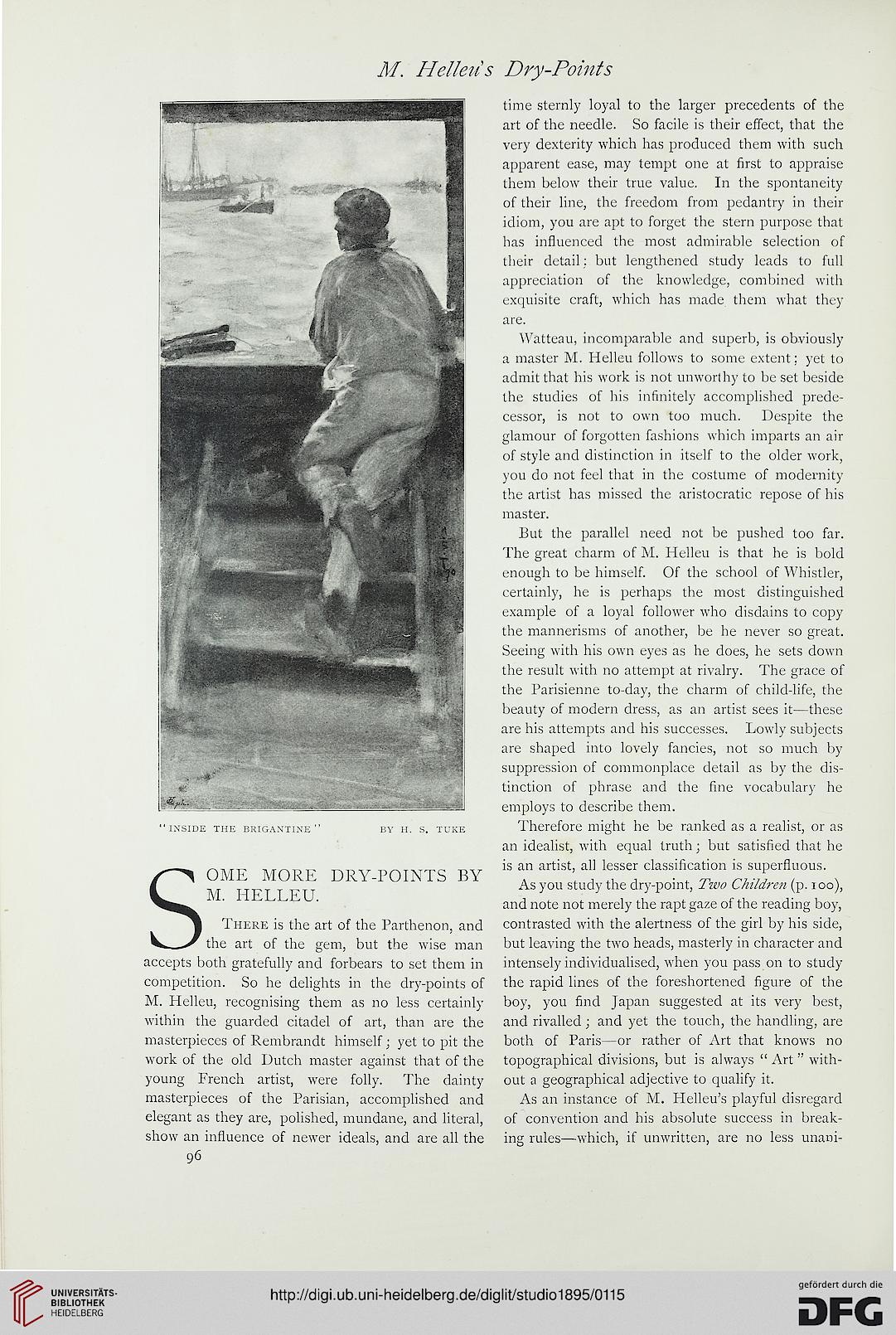 "INSIDE THE BRIGANTINE " BY H. S. TUKE

accepts both gratefully and forbears to set them in
competition. So he delights in the dry-points of
M. Helleu, recognising them as no less certainly
within the guarded citadel of art, than are the
masterpieces of Rembrandt himself; yet to pit the
work of the old Dutch master against that of the
young French artist, were folly. The dainty
masterpieces of the Parisian, accomplished and
elegant as they are, polished, mundane, and literal,
show an influence of newer ideals, and are all the
96

time sternly loyal to the larger precedents of the
art of the needle. So facile is their effect, that the
very dexterity which has produced them with such
apparent ease, may tempt one at first to appraise
them below their true value. In the spontaneity
of their line, the freedom from pedantry in their
idiom, you are apt to forget the stern purpose that
has influenced the most admirable selection of
their detail: but lengthened study leads to full
appreciation of the knowledge, combined with
exquisite craft, which has made them what they
are.

Watteau, incomparable and superb, is obviously
a master M. Helleu follows to some extent; yet to
admit that his work is not unworthy to be set beside
the studies of his infinitely accomplished prede-
cessor, is not to own too much. Despite the
glamour of forgotten fashions which imparts an air
of style and distinction in itself to the older work,
you do not feel that in the costume of modernity
the artist has missed the aristocratic repose of his
master.

But the parallel need not be pushed too far.
The great charm of M. Helleu is that he is bold
enough to be himself. Of the school of Whistler,
certainly, he is perhaps the most distinguished
example of a loyal follower who disdains to copy
the mannerisms of another, be he never so great.
Seeing with his own eyes as he does, he sets down
the result with no attempt at rivalry. The grace of
the Parisienne to-day, the charm of child-life, the
beauty of modern dress, as an artist sees it—these
are his attempts and his successes. Lowly subjects
are shaped into lovely fancies, not so much by
suppression of commonplace detail as by the dis-
tinction of phrase and the fine vocabulary he
employs to describe them.

Therefore might he be ranked as a realist, or as
an idealist, with equal truth; but satisfied that he
is an artist, all lesser classification is superfluous.

As you study the dry-point, Two Children (p. 100),
and note not merely the rapt gaze of the reading boy,
contrasted with the alertness of the girl by his side,
but leaving the two heads, masterly in character and
intensely individualised, when you pass on to study
the rapid lines of the foreshortened figure of the
boy, you find Japan suggested at its very best,
and rivalled ; and yet the touch, the handling, are
both of Paris—or rather of Art that knows no
topographical divisions, but is always " Art " with-
out a geographical adjective to qualify it.

As an instance of M. Helleu's playful disregard
of convention and his absolute success in break-
ing rules—which, if unwritten, are no less unani-