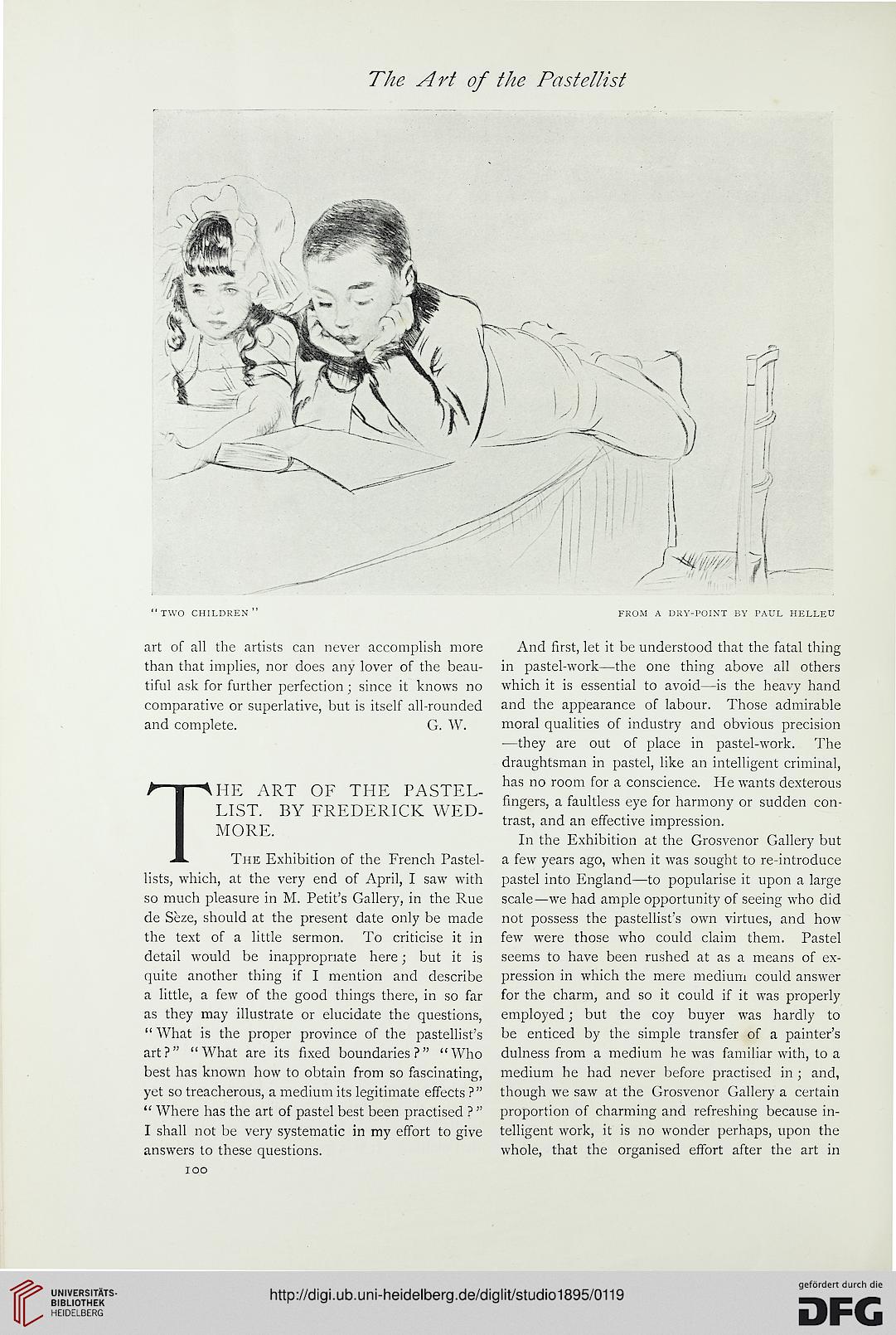 Information about OCR text
The A rt of the Pastellist

HE ART OF THE PASTEL-
LIST. BY FREDERICK WED-
MORE.

"TWO CHILDREN" FROM A DRY-POINT BY PAUL HELLEU

art of all the artists can never accomplish more And first, let it be understood that the fatal thing
than that implies, nor does any lover of the beau- in pastel-work—the one thing above all others
tiful ask for further perfection; since it knows no which it is essential to avoid—is the heavy hand
comparative or superlative, but is itself all-rounded and the appearance of labour. Those admirable
and complete. G. W. moral qualities of industry and obvious precision

—they are out of place in pastel-work. The
draughtsman in pastel, like an intelligent criminal,
has no room for a conscience. He wants dexterous
fingers, a faultless eye for harmony or sudden con-
trast, and an effective impression.

In the Exhibition at the Grosvenor Gallery but
The Exhibition of the French Pastel- a few years ago, when it was sought to re-introduce
lists, which, at the very end of April, I saw with pastel into England—to popularise it upon a large
so much pleasure in M. Petit's Gallery, in the Rue scale—we had ample opportunity of seeing who did
de Seze, should at the present date only be made not possess the pastellist's own virtues, and how
the text of a little sermon. To criticise it in few were those who could claim them. Pastel
detail would be inappropriate here; but it is seems to have been rushed at as a means of ex-
quite another thing if I mention and describe pression in which the mere medium could answer
a little, a few of the good things there, in so far for the charm, and so it could if it was properly
as they may illustrate or elucidate the questions, employed; but the coy buyer was hardly to
" What is the proper province of the pastellist's be enticed by the simple transfer of a painter's
art?" "What are its fixed boundaries?" "Who dulness from a medium he was familiar with, to a
best has known how to obtain from so fascinating, medium he had never before practised in ; and,
yet so treacherous, a medium its legitimate effects ?" though we saw at the Grosvenor Gallery a certain
" Where has the art of pastel best been practised ? " proportion of charming and refreshing because in-
I shall not be very systematic in my effort to give telligent work, it is no wonder perhaps, upon the
answers to these questions. whole, that the organised effort after the art in