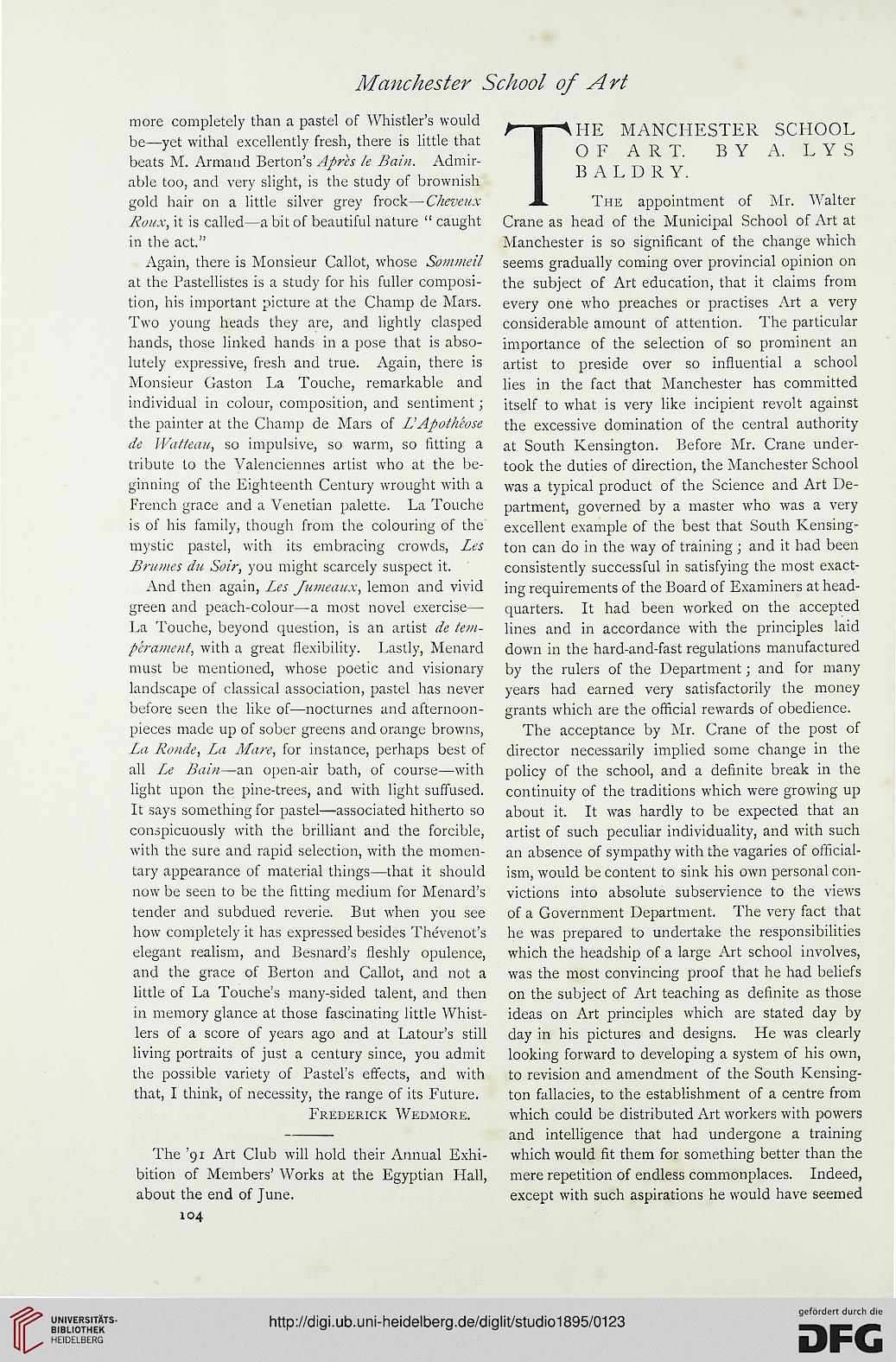 more completely than a pastel of Whistler's would
be—yet withal excellently fresh, there is little that
beats M. Armand Berton's Apres le Bain. Admir-
able too, and very slight, is the study of brownish
gold hair on a little silver grey frock—Cheveux
Ronx, it is called—a bit of beautiful nature " caught
in the act."

Again, there is Monsieur Callot, wThose Sommeil
at the Pastellistes is a study for his fuller composi-
tion, his important picture at the Champ de Mars.
Two young heads they are, and lightly clasped
hands, those linked hands in a pose that is abso-
lutely expressive, fresh and true. Again, there is
Monsieur Gaston La Touche, remarkable and
individual in colour, composition, and sentiment;
the painter at the Champ de Mars of B Apotheose
de Watteau, so impulsive, so warm, so fitting a
tribute to the Valenciennes artist who at the be-
ginning of the Eighteenth Century wrought with a
French grace and a Venetian palette. La Touche
is of his family, though from the colouring of the'
mystic pastel, with its embracing crowds, Les
Brumes du Soir, you might scarcely suspect it.

And then again, Les Jumeaux, lemon and vivid
green and peach-colour—a most novel exercise—
La Touche, beyond question, is an artist de tem-
perament, with a great flexibility. Lastly, Menard
must be mentioned, whose poetic and visionary
landscape of classical association, pastel has never
before seen the like of—nocturnes and afternoon-
pieces made up of sober greens and orange browns,
La Bonde, La Mare, for instance, perhaps best of
all Le Bain—din open-air bath, of course—with
light upon the pine-trees, and with light suffused.
It says something for pastel—associated hitherto so
conspicuously with the brilliant and the forcible,
with the sure and rapid selection, with the momen-
tary appearance of material things—that it should
now be seen to be the fitting medium for Menard's
tender and subdued reverie. But when you see
how completely it has expressed besides Thevenot's
elegant realism, and Besnard's fleshly opulence,
and the grace of Berton and Callot, and not a
little of La Touche's many-sided talent, and then
in memory glance at those fascinating little Whist-
lers of a score of years ago and at Latour's still
living portraits of just a century since, you admit
the possible variety of Pastel's effects, and with
that, I think, of necessity, the range of its Future.

The '91 Art Club will hold their Annual Exhi-
bition of Members' Works at the Egyptian Hall,
about the end of June.
104

The appointment of Mr. Walter

Crane as head of the Municipal School of Art at
Manchester is so significant of the change which
seems gradually coming over provincial opinion on
the subject of Art education, that it claims from
every one who preaches or practises Art a very
considerable amount of attention. The particular
importance of the selection of so prominent an
artist to preside over so influential a school
lies in the fact that Manchester has committed
itself to what is very like incipient revolt against
the excessive domination of the central authority
at South Kensington. Before Mr. Crane under-
took the duties of direction, the Manchester School
was a typical product of the Science and Art De-
partment, governed by a master who was a very
excellent example of the best that South Kensing-
ton can do in the way of training ; and it had been
consistently successful in satisfying the most exact-
ing requirements of the Board of Examiners at head-
quarters. It had been worked on the accepted
lines and in accordance with the principles laid
down in the hard-and-fast regulations manufactured
by the rulers of the Department; and for many
years had earned very satisfactorily the money
grants which are the official rewards of obedience.

The acceptance by Mr. Crane of the post of
director necessarily implied some change in the
policy of the school, and a definite break in the
continuity of the traditions which were growing up
about it. It was hardly to be expected that an
artist of such peculiar individuality, and with such
an absence of sympathy with the vagaries of official-
ism, would be content to sink his own personal con-
victions into absolute subservience to the views
of a Government Department. The very fact that
he was prepared to undertake the responsibilities
which the headship of a large Art school involves,
was the most convincing proof that he had beliefs
on the subject of Art teaching as definite as those
ideas on Art principles which are stated day by
day in his pictures and designs. He was clearly
looking forward to developing a system of his own,
to revision and amendment of the South Kensing-
ton fallacies, to the establishment of a centre from
which could be distributed Art workers with powers
and intelligence that had undergone a training
which would fit them for something better than the
mere repetition of endless commonplaces. Indeed,
except with such aspirations he would have seemed